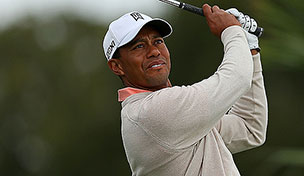 Getty Images
PORTO SANTO ISLAND, PORTUGAL - MAY 21: Simon Thornton of England hits his tee shot on the 1st hole during day three of the Madeira Islands Open on May 21, 2011 in Porto Santo Island, Portugal. (Photo by Dean Mouhtaropoulos/Getty Images)  -

PALM BEACH GARDENS, Fla. – Tiger Woods opened with an even-par 70 at the Honda Classic on Thursday, but it wasn't without one incredibly entertaining moment.

Woods made bogey on the 10th hole to start his round, then followed with another three holes later. He battled for most the day, missing several birdie attempts by just inches before getting one back with his first birdie at the par-5 third hole, followed by a second at the seventh.

In between them came one of the more entertaining scenes we’ve witnessed from Woods in a long time. After his tee shot on the sixth hole found the hazard on the left side, Woods found the ball and removed his socks and shoes, put on rainpants, took off his sweater and splashed a shot barefoot into the middle of the fairway, from which he got up-and-down for par.

“I was 1 over at the time, and if that ball is not playable from where it's at, where I caught was pretty far back and I would have had to have dropped,” he later explained. “I couldn't even get an angle in the first cut and had to drop in the primary and had to lay up and didn't get that up-and-down – looking at a six, 3 over, [but] all of a sudden I flip it, make par there and birdie the next.”

It was a huge swing in a day that didn’t have too many ups and downs. In his first competitive round at PGA National since a final-round 62 netted a share of second place last year, Woods hit nine of 14 fairways and 14 of 18 greens in regulation, but needed 32 putts on the deceptive greens.

Woods is seeking the 76th victory of his PGA Tour career. He owns a win already this year at the Farmers Insurance Open, but lost in the opening round of last week’s WGC-Accenture Match Play Championship to Charles Howell III.