Through it all, Woods remains remarkable 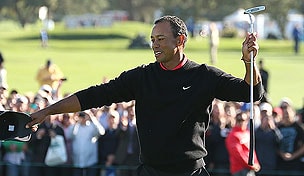 For 15 years, from 1994 through 2008, from the first of his three consecutive U.S. Amateur titles to his stuff-of-legend U.S. Open triumph at Torrey Pines, the Tiger Woods story was unambiguous.

No doubts. No weaknesses. No competition. No limits.

Across a decade of uncertainty, with institutions from banks to baseball to buildings collapsing all around us, Tiger was startlingly dependable. Month after month, year after year, he dropped 40-footers on top of 30-footers on top of 20-footers, and always when it mattered most. He brought masses to their televisions and then out of their seats.

It was 15 years of “I don’t believe what he just did;” 15 years of obliterating nearly every reasonable measure of greatness: four consecutive major wins; 142 consecutive cuts made; U.S. Open triumph by 15 strokes; career slam by age 24.

How do you blur a record that remarkable?

By setting your personal life ablaze. By letting TMZ dictate your story.

So in late 2009, the hero teardown commenced – a modern American pastime. Even in his darkest period, Tiger’s always given the public plenty to chatter about and it’s always been spectacular in scope.

Three years after his crash, Tiger’s personal history may well be as famous as his professional history. The mind and body healed, he’s comfortably focused on burnishing the latter once more.

He’s still on pace to pulverize Sam Snead’s record of 82 PGA Tour wins (Tiger now has 75). And he’s still at the center of sports’ most compelling record chase, the quest to catch Jack Nicklaus’ major mark of 18 (Tiger has 14).

He may no longer be unambiguous. But he’s still great at golf. He’s still Tiger.