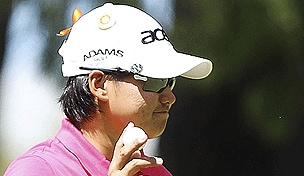 RANCHO MIRAGE, Calif. – Yani Tseng was working her way into red numbers and climbing the leaderboard Friday at the Kraft Nabisco Championship until a triple bogey at her 16th hole derailed her.

Tseng was 1 under through 11 holes but played the final seven holes in 4 over. She pulled a 3-wood out of bounds with her tee shot at No. 7, a costly mistake.

“One shot cost three more shots,” said Tseng, who won here three years ago. “Everything was fine until the 16th hole. After that, it was very disappointing.”

Tseng posted a 3-over-par 75 and sat seven off the lead after the morning wave. She hasn’t finished worse than third at the Kraft Nabisco over the last three years. She won it in 2010.

“If I trust the shots I’m hitting more, everything will be fine,” said Tseng, who can regain the Rolex No. 1 world ranking with a victory this weekend. “I need to get that momentum going. I love this course, and I know I can shoot a low score here.”