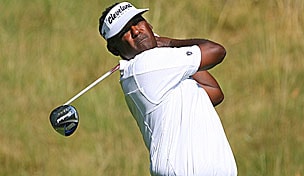 HUMBLE, Texas – Vijay Singh withdrew from this week’s Shell Houston Open after the Friday 5 p.m. deadline because of a knee injury, according to the PGA Tour.

Singh has been the subject of an ongoing investigation since January 28, when he revealed to Sports Illustrated that he had used deer-antler spray, which contains the banned ingredient IGF-1. He withdrew from that week’s Waste Management Phoenix Open with a back injury the next day but has since remained competitive.

In five starts since that revelation, the Hall of Fame member has made the cut each time, finishing between 27th and 57th in all, despite the fact that he has gotten himself into contention entering the weekend rounds.

Tour commissioner Tim Finchem has maintained that there is no timetable for a ruling on Singh and that if it’s a favorable one for the player, there may not be any announcement.

Singh turned 50 years old on Feb. 22 but has remained active on the PGA Tour instead of moving to the Champions Tour.