Simpson puts on show in scrapped first round at Hyundai 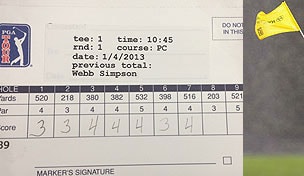 KAPALUA, Hawaii – Matt Kuchar stood in the player locker room holding up a piece of paper as a few of his fellow competitors huddled around, marveling at it like a winning lottery ticket. Close. It was Webb Simpson’s scorecard, showing him at 3-under through seven holes in blustery, drenched, brutal conditions during what was supposed to be the opening round of the Hyundai Tournament of Champions.

That piece of paper was rendered nothing but an obsolete souvenir when Friday’s play was suspended after just 131 minutes, then wiped off the books completely.

The PGA Tour wanted to put on a show for Opening Day. Well, this one was kind of like Seinfeld. A show about nothing.

As far as ominous signs are concerned, wiping away the first round of the season might be akin to breaking a mirror while walking under a ladder with a black cat crossing your path.

Instead, the 30-player field will return Saturday for a scheduled 36 holes on the Plantation Course, with impending weather predicted to be even worse than the day that was just deemed irrelevant. More on that later. First let’s get to a few reactions from players about the notoriously un-Maui-like conditions on Friday.

“It was really bad. I mean, it was gusting 35. It was real borderline from the first tee shot,” Ian Poulter opined.

“That rain and wind combination, that was about as bad as I’ve seen. I couldn’t even get the umbrella up straight – and I’m pretty strong,” deadpanned Kyle Stanley.

This was the first time the PGA Tour declared a round and void since the second round of the 2005 Players Championship – and you’d be hard-pressed to find a player not named Webb Simpson who wanted to remain on the course.

“It stinks for me,” he said. “I got off to a great start but that's the way it goes. I'm sure they made the decision that's best for all the guys.”

While Simpson may have been left screaming toward the heavens like the Bishop from “Caddyshack,” the rest of the players in the field will be more than happy to start anew.

“[Thursday] we were joking with our amateurs [in the pro-am] that we really didn’t need to play,” Zach Johnson explained. “Then after six or seven holes, I wasn’t beating around the bush at all. I was like, ‘Guys, we can go have lunch and just converse.’ But they wanted to play. Long story short: That was one of the worst experiences I’ve had on a golf course in terms of weather, but today would have been even worse.”

He continued: “You can’t use an umbrella, because it’s too windy. When you combine it with the rain, it’s just tough. You can’t get the ball to stay on the greens – and they’re slow. … I saw some of the pin placements. A ball would get to three feet, look like it was going to stop, then all of a sudden it’s off the green. Those kinds of things should be taken care of tomorrow with a level playing field.”

So now the PGA Tour season will officially begin at 7:30 a.m. local time on Saturday, with players starting on two tees and theoretically playing two full rounds. Theoretical because the forecast calls for 25-35 mph winds with gusts of up to 40 mph.

While the plan makes sense on paper, it was enough to leave a few players snickering due to the fact that Friday’s eventual delay was caused by a 41 mph gust and the biggest wind of the day was 45 mph. What it means is that we could be doomed for a long weekend through the scheduled Monday finish, one in which some more severe decisions could still loom.

Usually the most difficult decisions here on Maui involve choosing between the beach or pool and whether to hit the buffet line for another helping of pineapple.

Of course, Maui doesn’t often feel like a preheated version of Scotland, with violent winds ripping through the course. Much like the players who will attempt to slog it out for 10 hours on Saturday, it appears those windy conditions aren’t going anywhere for a while, either. All of which renders the season-opener little more than an open-ended question right now.