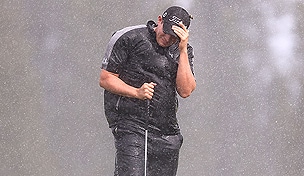 KAPALUA, Hawaii – There were highs and lows in Maui on Friday that had nothing to do with the weather.

In the season-opening Hyundai Tournament of Champions, Webb Simpson battled rain and wind and found himself 3 under through seven holes on The Plantation Course before first-round play was suspended and later scrapped entirely.

While the weather was a downer, Simpson's attitude remained upbeat.

'It stinks for me,' Simpson said. 'I got off to a great start but that's the way it goes.'

Simpson was two shots clear of the field and of the 24 other players on the course, he was one of only two players under par.

'I'm sure they made the decision that's best for all the guys,' Simpson said.

Meanwhile, a few feet away in the men's locker room Scott Stallings' face was beaming. Through four holes, Stallings was 7 over after a quadruple-bogey 8 at the par-4 third and a double bogey at No. 4.

“Obviously I benefited from it the most,' Stallings said. 'But you know, to try to get everyone on as level a playing field as we can. Gotta give everyone their best opportunity.”

No matter Simpson's or Stallings' outlook on Friday's play, their forecast is the same – the chance to start anew Saturday.