What We Learned: Snedeker, Ko with impressive victories 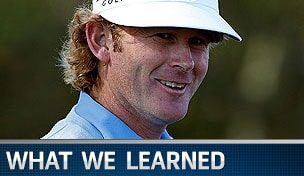 Each week, GolfChannel.com offers thoughts on 'what we learned' from the world of golf. This week, our writers weigh in on Brandt Snedeker's impressive victory at Pebble Beach, 15-year-old Lydia Ko's third professional win in just over a year and the downfalls of a pro-am style tournament.

It isn’t very often that a golfer calls his shot, but that’s nearly what Brandt Snedeker did at Pebble Beach. Last week, fresh off a second straight runner-up finish to one of the game’s icons, Snedeker said he was tired of second place. To be great, Snedeker explained, he had to win tournaments.

So one week later, along the Monterey Peninsula, that’s exactly what Snedeker did, winning his fourth PGA Tour event since the start of the 2011 (as many as Tiger Woods, one less than Rory McIlroy) and fifth Tour win overall.

Snedeker hadn’t even clutched his crystal trophy yet before he started talking about winning majors, starting in April at Augusta National.

Snedeker was in contention there in 2008 before a final-round 77 left him in tears.

He’s grown up a lot since then, enough to be taken seriously nearly every time he tees it up. – Damon Hack

As a society, we’ve become desensitized to certain things. From violence on TV to unpredictable weather, we learn to live with issues that would have been bigger news for previous generations.

A similar desensitization has happened in the game of golf. Not that long ago, a teenager could tee it up with the world’s best professionals and that alone – score and result notwithstanding – would have been enough to warrant major headlines. But now? It’s become a weekly standard to see young men and women competing alongside their heroes. Check that: competing well.

And so when 15-year-old Lydia Ko won the New Zealand Women’s Open on Sunday – already her third victory in a professional event – much of the golf world offered a collective shrug toward the accomplishment.

Been there. Done that.

We’ve seen players such as Michelle Wie and Morgan Pressel set the game afire at a young age, so we’re now accustomed to it.

Well, forget suspending disbelief; it’s time we suspend belief when it comes to young players winning tournaments in general and the exploits of Ko in particular. What she has done prior to her Sweet 16 is nothing short of remarkable. Her “career” – if you can call it that for a sweet kid with a brilliant smile – has already surpassed those of some big-name professionals. It doesn’t look like there’s any end in sight, either, as she’s got all the tools to become a superstar. Yes, I know. You’ve heard that before. And like Roger Daltrey once screeched, we won’t get fooled again. But take a minute to realize just how impressive Ko has been and just how bright her future is.

In other words, stop the desensitization. – Jason Sobel

Barring injury, Brandt Snedeker will be the first FedEx Cup champion to play the Tour Championship the next season. Following back-to-back runner-up finishes at the Farmers Insurance Open and Waste Management Phoenix Open, Sneds cruised to victory on Sunday at Pebble Beach and has 1,282 FedEx Cup points. That was good enough to rank 18th on last year’s regular-season points list and likely good enough for a return trip to East Lake. – Rex Hoggard

I learned – no, it was brutally enforced – that it should be pros-only during the final round at Pebble Beach. Let the celebs have their fun on Saturday, which is always the most unwatchable telecast of the year, and then clear the way for the pros. That’s the way it is at the Humana Challenge – the amateurs play each of the three courses in the tournament rotation, and never have there been complaints about pace of play there. But it’s unfair for the play-for-pay types to endure rounds of five-plus hours when they’re trying to win the event or grinding to improve their status for the reshuffle. Watching three days of wayward driving and yippy putting is already torture enough. – Ryan Lavner

Lydia Ko's desire to remain an amateur has been admirable, but the 15-year-old is giving away so much money doing so. The pressure to turn pro ratchets up with her third professional title in 53 weeks.

It isn't just the money she is leaving on the table. More than that, it is the fact that she is just too talented to get much more out of the amateur game. If she is going to continue to get the most out of her remarkable gifts, she is going to have to do it as a pro. The amateur game has little left for her, and yet she is so young to live in a competitive adult world.

If you are Lydia Ko, or the folks who love her, it's a tougher call today than it was last week. If she wants to go to college, to round out her life experiences, it might have to be as a pro, on the same route that So Yeon Ryu and Michelle Wie took. Ko is too talented to play for a college program. – Randall Mell