What We Learned: Shell Houston Open 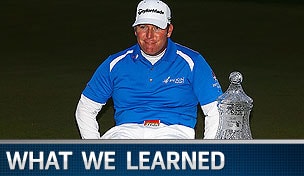 Each week, GolfChannel.com offers thoughts on 'what we learned' from the world of golf. This week, our writers weigh in on the new craze that is 'Dufnering,' when it's the right time to peak, and the remarkable winning streak by Americans on the PGA Tour.

Golf has no shortage of delightfully quirky personalities these days. There’s Bubba Watson, there’s Boo Weekley, there’s Ben Crane and the Golf Boys, but the rising personality is the guy who never figured as a personality.

Jason Dufner, the unflappable one who sometimes barely seems to have a pulse, elevated his status as a PGA Tour “character” with the advent of Dufnering this past week. Everyone’s doing it after a photograph of his humorously meditative pose zoning out in an appearance in a third-grade class went viral. After D.A. Points won the Shell Houston Open, he was photographed Dufnering with the trophy. There’s an opportunity in this for the Golf Boys, too. There’s the chance to give Dufnering some lyrical life. – Randall Mell

It makes for good fodder, but there’s no such thing as trying to peak at the right time. I know, I know. Tiger Woods says it all the time, that he wants to ensure his game is peaking for the four major championships each year. But I spoke with his instructor Sean Foley about it recently and he said he doesn’t understand how that’s even possible. One caddie for a top player explained to me on Sunday that golfers aren’t like thoroughbred horses, meaning you can’t train 'em to run at top speeds for the big races. If we needed a latest example, it comes in the form of D.A. Points, who had made only two cuts this year with a best finish of T-63 before winning the Shell Houston Open. Every golfer would love to be in form going into the upcoming Masters, but form is fleeting. The truth is, they all start at even and go from there. Such thoughts should buoy any players who aren’t quite on top of their games just a week before heading to Augusta National. These players can take solace in the story of Points and so many others before him, knowing that previous results aren’t a determining factor of future success. And yes, I’m looking directly at you, Rory McIlroy. – Jason Sobel

I could have made a lot of money after last year’s Ryder Cup betting that Americans would win the first 14 PGA Tour events of the 2013 season. Following the American collapse on Sunday at Medinah and the influx of European talent on the American circuit this season (Lee Westwood, Ross Fisher, etc.) it didn’t seem likely that the red, white and blue would be a perfect 14-0 in '13, but D.A. Points’ closing 66 on Sunday in Houston completed the unlikely sweep. – Rex Hoggard