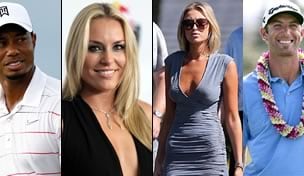 Four tournaments into the 2013 season and we’ve already seen the golf world swirling with a wind-shortened tournament, a rookie triumph, a playoff victory, and the reminder of Tiger Woods’ dominance at Torrey Pines. There have been rumors and mumbo jumbo, induced by everything from politics to women. We’ve rounded-up the hottest topics and discarded the junk as the Tour heads to the Waste Management Phoenix Open.

1. For the love of the game: The year opened with romance gossip on Tour regarding Dustin Johnson and Wayne Gretzky’s daughter, Paulina. Now attention has turned back to Tiger’s love life. It was reported he was trying to make things work again with ex-wife Elin Nordegren, to the tune of a $350 million pre-nup and anti-cheating clause, but then news broke last week about a budding relationship with Olympic skier Lindsey Vonn.

2. Alternatives to long putters: At the PGA Merchandise Show this past week, TaylorMade’s Frank Firman confirmed that the sales of the long and belly putters that accounted for 12-to-15 percent of putter sales during 2012 fell to about 3 percent in December in the aftermath of the November 28th proposed anchoring ban. TaylorMade is no longer manufacturing new long putters and has decided to introduce alternative models, like the Daddy Long Legs that conforms. Other companies like Odyssey and Ping are doing the same.

4. Tiger: Woods picked up his first victory of the season, seventh Farmers Insurance Open title, and eighth victory at Torrey Pines (including his 2008 U.S. Open playoff win) Monday. Lesson to be learned here: You can pencil Tiger in as the victor when he’s playing where he’s most comfortable (Bay Hill, Muirfield Village, etc.).

5. LPGA’s global reach: The new biennial match-play competition, the International Crown, was unveiled at last week’s PGA Show. It will kick off next year and will feature eight countries which can compile the strongest four-player teams determined by world rankings. It showcases the global nature of women’s golf, yet will be contested in the United States. Not everyone wins; a select few top players like Suzann Pettersen would not be eligible because their countries do not have enough teammates eligible to compete.

6. Stepping away: Steve Stricker announced at the beginning of the season that he’d be going into semi-retirement. Have you noticed his absence? It’s still early, but for a player who has been ranked as high as second in the world, it makes you think about anyone’s staying power these days on the PGA Tour – other than Tiger, and maybe Phil, and perhaps Rory McIlroy. We’ve experienced a sabbatical from the game by Tiger and we have the threat of one from Phil due to the political climate in California, and now McIlroy is not slated to play during a five-week span after missing the cut in his debut in Abu Dhabi. But all of this comes in the midst of the PGA Tour moving to a wrap-around schedule.

7. Phil’s politics: After speaking publicly about life changes he has considered in the wake of what could be taxes as high as 62 or 63 percent of his income, Mickelson took a step back, saying at Torrey Pines that he should not have spoken out as he did. It’s still unknown where Phil and his family will be moving if they do leave their Cali life, but Phil has always liked shaking things up and challenging the system.

8. Golf’s QR Code: They’re commonly seen these days as scan-able codes for you to zap with your smart phone to retrieve more information as part of consumer advertising, and the World’s Largest Golf Club and Spa Resort (certified by Guinness World Records) has taken it to their level, to promote sustainable and eco-tourism. Two-thousand employees created the real life QR Code by holding umbrellas on the driving range in Shenzhen, China.

9. Streamsong: Taking a page from their Bandon Dunes success, the new Tom Doak, Bill Coore, Ben Crenshaw golf mecca hosted its grand opening Jan. 26 with around 300 golf media, fans, friends and family from the golf industry in attendance. It’s 85 miles southwest of Orlando, in the middle of nowhere in what looks like anything but a Florida landscape. I had the opportunity to play the Coore-Crenshaw Red course on Sunday, leaving my home in the Orlando area at 5:15 a.m. for a 7:45 a.m. tee time. Worth the trip.

10. “Name Your Price” golf balls: Hate buying balls? GolfBallsUnlimited.com announced a Priceline-type concept where golfers can “name your price” by entering a price suggestion on balls until an amount is accepted. The balls will be shipped to your home after the interactive online transaction. Start bidding!