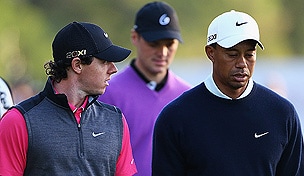 The PGA Tour travels to the Sunshine State to kick off the Florida swing this week at the Honda Classic. It's finally time for the East Coast-based players to play in their own time zone (and many in their hometown) without the threat of snow, although with plenty of humidity. The Tour tops this week's Hot List, and women's stock in the game is up this week, as well. With the Masters on the horizon and spring just around the corner, we bring you this week's buzz in the game.

1. Tim Finchem: In the game of professional golf the Tour rules, but when it comes to the actual rules of the game, that power is in the hands of the U.S. Golf Association and the Royal & Ancient Golf Club. On Sunday, Tour commissioner Tim Finchem stood up for the players, who use the anchored putter, voicing his belief that it is not in the best interest of golf or the Tour to ban it. The Tour’s case against the proposed ban is rooted in 'the lack of evidence to support the contention that anchoring provides a competitive advantage, as well as the length of time the practice has been allowed – and previously approved on two different occasions.'

2. Shelia Johnson: She doesn't have a handicap, nor does she consider herself an avid golfer, but the cable TV pioneer who co-founded Black Entertainment Television and now owns Innisbrook, site of the Tour's Tampa Bay Championship, was elected as the first African-American woman to the 15-member USGA executive committee. Her value to the USGA is to help grow the game, to make women and minorities, who enjoy the game, feel included in the sport. While the USGA would surely like her to begin establishing her handicap index, her perspective as a recreational golfer might be exactly what the USGA needs.

3. Michael Phelps: His golf game is on display in the latest edition of the 'Haney Project' that kicked off this week. There's more to Phelps than his gold medals and more to his golf game than that super long putt at St. Andrews.

4. Fall winners: They are in the spotlight as Billy Payne weighs in to decide whether Tour winners in the fall will be invited to the Masters. This comes as a result of the new Tour wraparound season that begins later in 2013, following the Tour Championship. Six fall tournament winners have traditionally not been eligible.

5. Aerotech: Golf shafts are often overlooked when it comes to 'what's in the bag.' Aerotech has been getting its name out there recently as the SteelFiber shafts that have the power of graphite with the stability of steel. They were in the winner's hands on Sunday at Dove Mountain and are the No. 1 iron composite shaft on Tour, winning the 2012 FedExCup title, the Tour Championship, and The Players Championship.

6. Bridgestone: On the topic of equipment, the current top two players in the FedExCup standings are both on the Bridgestone staff. Brandt Snedeker leads the standings with Matt Kuchar in second following his victory in Arizona.

7. Sleeping in own bed: About a year ago, Tiger Woods, a new resident to the Jupiter, Fla., area, which is near this week's Tour stop in Palm Beach Gardens, teed it up in the Honda Classic for the first time. And attention to this sleepy, yet affluent, South Florida address began to pop. Woods is just one of many golfers to make this region their home including Rory McIlroy, Jack Nicklaus, Ernie Els, Keegan Bradley, Rickie Fowler, Dustin Johnson, Camilo Villegas, Steve Marino, Jesper Parnevik, Robert Allenby, Tom Gillis, and Kris Blanks – just to name a few.

8. Women: The Tour has partnered with Astellas Pharma on a 3-year agreement to champion the Tour's commitment to its new Women's Initiative, which is 'designed to enhance the tournament's experience for women and engage women in a meaningful and productive way,' according to Finchem. As part of the initiative, an Executive Women's Day during tournament weeks will focus on professional, health and personal development, and there will also be an Astellas Pavillion, where women can engage and learn about wellness issues.

9. Rory vs. Tiger: The dueling Nike stars, who battled for the title last year at the Honda Classic, are back in the spotlight in their new hometowns. They play some practice rounds together, which further fuels the fire that this could be another epic week as the Florida swing gets underway.