Tseng looking for three-peat in Thailand 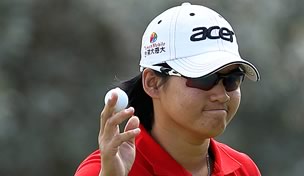 “She got my money,” Choi said.

Tseng made a strong Sunday charge last week at the ISPS Handa Women’s Australian Open to finish second to Jiyai Shin. This week, Tseng is looking to improve upon that finish at the Honda LPGA Thailand. She’s looking to become the 10th LPGA pro to win the same event three years in a row.

Last week, Tseng’s reign at No. 1 reached exactly two years. She can build again on her once formidable lead in world ranking points with a three-peat.

“I think you look at the year that Yani had in 2011 and how good she played and how she made the rest of us work hard,” Lewis said. “She said she didn’t play that well last year, and she won three times. But I think Yani made everybody work harder. I think that’s good for the tour, and it’s good for the rest of the tour that the race is a little closer. I know that Yani would like a bigger lead, but I think it’s great for the tour that we have some good competition and it’s players from all over the world. It’s fun to be in that race, and it’s fun to be one of the players to be chasing her. We are all working hard and I know she’s working doubly hard so it’s going to be tough to catch her.”