State of the Game: It's just fine, Arnie says 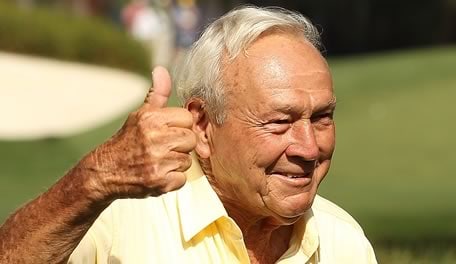 In May of 1994, Sports Illustrated ran a cover asking, “Is Tennis Dying?” Of course, the cover generated a lot of attention, but the answer was obvious. While the sport may have been experiencing challenges at the time it was far from dead. In fact, between 2000 and 2012 U.S. participation in tennis was up 31 percent.

In 2014 some analysts questioned whether golf - a sport that has been growing worldwide for about 500 years - is dying. You’ve heard some of the eulogies:  Participation, they say, is down. That’s not exactly accurate. Sure, golfers are always leaving the game, but new golfers are always joining and if you ask the National Golf Foundation the churn we’re seeing is in line with historical norms.

The critics cite the problems experienced by one or two sectors of the industry while ignoring the solid results of others. For instance, nearly all of the Chicken Littles screeched in July when 500 PGA professionals were laid off from a national sporting goods retailer. The media played up the fact that the layoffs were due to softening sales of golf equipment. What the headlines didn’t mention is that those golf equipment sales were down just 2 percent from the previous quarter.

For six years, the doubters have been describing Tiger Woods and his recent struggles as a drag on the game. Sure, a healthy, winning Tiger is good for the sport, but I think that as we look ahead to 2015 we’ll have the best of two worlds: a returning, rejuvenated Tiger and a roster of talented young players who want to take him on at his best. As I see it, there are actually two pieces of very good news for Tiger as 2015 begins. The first is that after years of being hindered by injuries, Tiger finally took the extensive break his body needed. From what I’m hearing, he’s shown real discipline in easing himself back into competitive form.

The second bit of good news for Tiger was his decision to go coach-less for a while and re-think his approach to the golf swing. And when he did hire instructor Chris Como, Tiger referred to him as a “consultant,” not a “coach.” We can argue about major championships and whether Tiger will ever surpass Jack’s 18 majors, but what can’t be argued is this: Tiger Woods is the most dominant, most skilled player we’ve ever seen. A person with that kind of ability may need coaching, but on a limited scale. I love that idea. Look at the better players of my era - Jack Nicklaus, Gary Player, Lee Trevino, Raymond Floyd. They had pros they worked with from time to time, but out on Tour, thousands of miles from home, each of them learned to be his own best coach.  I think Tiger can do the same.

Another very hopeful development for the game was last summer’s U.S. Women’s Open victory by Michelle Wie. Aside from Tiger himself, I doubt that the golf world has ever put so heavy an expectation on a young professional. Imagine that as she entered 2014 she was only 24 years old and was already considered by many a bust. Then, after a win in April and her memorable performance at Pinehurst, you could almost see the confidence brewing. I have a feeling that her win at Pinehurst changed everything for Michelle. Injuries, long her nemesis, kept her from playing her best as 2014 came to a close, but I see great success for her ahead.

Then there’s Rory McIlroy. What a pleasure he is to watch. His power and flexibility are hypnotic. He seems to be maturing from a boy into a young man and as he does so his game is only improving. I fully expect that he’ll contend at this year’s Masters. A green jacket would complete for him the career grand slam at the age of 25. I’ve got 60 years on the guy and I haven’t completed the slam…yet.

Another promising sign for the game can be found right here at Golf Channel. As hard as it may be to believe, Golf Channel will celebrate 20 years on the air on January 17, 2015. We seem to grow stronger with each passing year, something that simply couldn’t happen without a vibrant, healthy industry to support us. How those 20 years have flown by. I remember like yesterday standing beside my friend and co-founder Joe Gibbs and throwing the switch to put Golf Channel on the air. Our recollections of the birth of Golf Channel can be found in a recently published book, “The Golf Book: Twenty Years of the Players, Shots and Moments That Changed the Game” (to which I contributed the foreword). The book, by veteran golf writer Chris Millard, takes a look back at the last two decades of the game and it dedicates an entire chapter to the rise of Golf Channel.

The last chapter of Chris’ book, is titled The Next Twenty. It makes a very strong case for the future of our sport. It details the likely growth of golf in Asia and the global boost that the game is likely to enjoy as a result of golf’s return to the Olympic Games in 2016.  I think he’s right. Golf has had a couple of tough years, but we’ve had them before. In fact, all sports go through cycles. Think of the NBA before Larry Bird, Magic Johnson and Michael Jordan. Think of boxing after Muhammad Ali. Finally, before we bury golf, we might want to note that Golf Channel's ratings last year were the second best in its 20-year history. The fact of the matter is that golf is alive, well and booming worldwide.