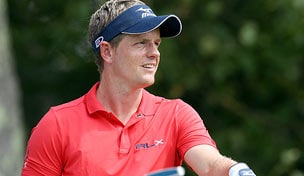 ST. ANDREWS, Scotland – Leading the money lists on both sides of the Atlantic, top-ranked Luke Donald is eyeing another big payday at the Dunhill Links Championship.

The 33-year-old Englishman returns to the European Tour after completing his PGA Tour schedule in the United States by finishing tied for third at the Tour Championship and earning $418,667.

It’s another impressive display in what has been a stellar year for Donald, who has topped the rankings since May and won four titles in 2011 – including the Scottish Open at the Castle Stuart links course in July.

Donald is attempting to become the first player to win the money titles in Europe and the United States.

A winner’s prize of $800,000 is on the line this week with five of the top six players, including defending champion Martin Kaymer of Germany, in the field at Dunhill Links. The tournament is played over three of Scotland’s best courses – the Old Course at St. Andrews, Carnoustie and Kingsbarns.

The leading American at the event is fifth-ranked Dustin Johnson, who will have a new caddie this week after Joe LaCava’s decision to take over Tiger Woods’ bag as a permanent replacement for Steve Williams.

“To have a good friend in your group and always around you while you play on three wonderful golf courses, it is probably the best week of the year on the European Tour,” said Kaymer, whose father will be his playing partner and brother will caddie.

Kaymer and second-ranked Lee Westwood – who have both been ranked No. 1 in 2011 – have each won only one tournament this year. Donald has proved a relentless front-runner in the rankings in the past four months.

Apart from Woods, the last player to have as big a lead at the top of the rankings was Greg Norman in May 1996.

Donald’s consistent game has few flaws. His straight, punchy drives can eliminate the wind and a deftness around the greens makes him well-suited to links golf. He proved it by winning a rain-curtailed Scottish Open at 19 under in just three rounds.

However, he flopped at the British Open a week later, missing the cut and failing to break his drought in majors.

Westwood, also without a major title, is hoping for a change in fortune on the greens as he tries to turn a string of top-10 finishes into wins.

“It’s frustrating when I’m giving myself so many chances and not really walking off with the scores I think I should’ve done,” said Westwood, who won the Ballantine’s Championship in South Korea in April. “I haven’t really had what I consider a good putting round all year. Tee to green, I’m very consistent.”