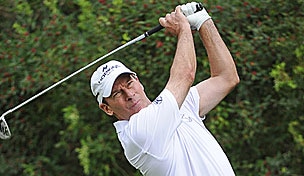 PITTSBURGH – John Huston spent most of the last three months wondering when his balky back would finally let him swing a golf club without making him want to double over in pain.

Turns out, all he really needed was a handful of new stretching exercises and a scorching hot putter.

Rejuvenated after working with a back specialist whose client list includes Fred Couples, Huston fired a 5-under 65 on Thursday to take the first-round lead in the Constellation Senior Players Championship at Fox Chapel Golf Club.

''Usually in the past if I had back problems, three or four days I'm back ready to go,'' Huston said. ''This one's been a little bit more difficult.''

Huston returned last week to slog to a tie for 32nd in Illinois in the Encompass Championship. He needed a handful of days to recover and admitted he was happy storms shaved the Wednesday pro-am to a nine-hole event.

A good night's sleep and a tee time pushed back a handful of hours due to a steady downpour early on Thursday morning proved to be just what he needed.

Huston started on No. 10 and was even par halfway through his round before making a big move on the front nine. He shot 5-under 30 coming in, including four birdies and an eagle on the short par-4 seventh.

''I really didn't make anything, and then all of a sudden, the last 10 holes I made a bunch of putts,'' Huston said. ''I think that kind of turned the round around.''

And Huston is better than most at hitting the gas pedal when things are going his way.

The seven-time PGA Tour winner set a Tour record at the time when he captured the Hawaiian Open in 1998 at 28 under. He wasn't quite as hot on Thursday, but with the soft greens begging players to be aggressive, he didn't hesitate to aim for the back of the cup.

''I feel like whenever you do have the momentum, I think you've got to take advantage of it because it can turn around and go the other way just as fast,'' Huston said. ''The more birdies you get on Thursday and Friday, the bigger cushion you have on the last couple of days.''

Couples, Duffy Waldorf, Fred Funk and Russ Cochran were a stroke back in the third major on the Champions Tour schedule. Tom Pernice Jr. had three straight birdies to start his round and led a group of five players at 67.

The start of play was delayed nearly five hours because of heavy rain. When the sky cleared, portions of the 6,696-yard course remained under water. Officials sent players off both the first and 10th tees, invoked the lift, clean and place rule and moved the tees up on a handful of holes to speed things along.

Even the little nudge forward didn't always help. Tee shots plugged into fairways and approach shots went nowhere, helping bunching the field. Over half of the 81-player field finished at even or better, creating little separation.

Still, Huston found some breathing room. He got his round going with a tap-in birdie on the par-5 18th, kickstarting a stretch where he made five birdies in a span of seven holes, including a 40-footer on No. 6. He capped the run by driving the green at the 295-yard par-4 seventh and sinking the 25-footer for eagle to vault him into the lead.

Even better, when he walked off the ninth hole at the end of an eventful day, he did it with little pain.

Couples, searching for his first victory of the season, put together three birdies on the back nine, including one on the 18th that pulled him within a shot of the lead. The Hall of Famer finished fourth on the course a year ago, faltering on the weekend to finish four shots behind winner Joe Daley.

He was joined by Waldorf, who is making a habit of getting in position early. He has led after the first round in three of his previous four events and is finally getting comfortable in his first full season on the tour for players 50-and-over.

''I've been putting better, getting those birdies in early, and that takes a lot of pressure off,'' Waldorf said. ''I'm getting off to a good start, and that's made the difference.''

Points leader David Frost, who edged Couples by a shot at the Regions Tradition three weeks ago in Alabama to capture the first major of his 32-year career, bounced around all day before joining a large group at 68.

Newly minted Hall of Famer Colin Montgomerie began his Champions Tour career with a steady 1-under 69. The 31-time winner on the European Tour started a little shaky, flying his approach shot on the 10th hole over the green. He scrambled for par and missed just one more green the rest of the day.