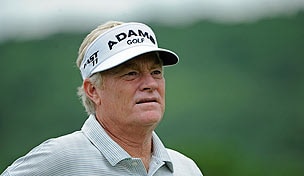 ENDICOTT, N.Y. – Even at age 53, Mark Wiebe learned something about himself.

“I didn’t know I was a control freak, but I like being in control,” Wiebe said.

So far he is exactly that at the Dick’s Sporting Goods Open.

Wiebe shot a 4-under 68 on Saturday to take a two-shot lead over John Huston (70) after the second round. Bidding for his second straight Champions Tour victory, Wiebe was at 11-under 133 at En-Joie Golf Club.

While his challengers took turns making costly mistakes, Wiebe continued his solid play, finishing his second straight round without a bogey to stretch his streak to 64 holes. “I prided myself for my patience level today,” Wiebe said. “I’m kind of proud of the way I’m managing my game at this point in time in my life.”

Wiebe started with a flourish, sinking a 45-foot birdie putt on the first hole, then hitting a wedge to 10 feet and making another birdie at No. 2. He reached 10 under after pitching to 5 feet and making birdie at the par-5 fifth hole.

Huston started the day tied with Wiebe at 7 under, but his day nearly unraveled on the front nine. He made bogey at the par-5 third hole when mud on his ball sent his second shot into a bunker and he hit his third shot over the green.

After rallying with a birdie at the par-5 fifth hole, Huston had a double bogey at the par-3 seventh, missing a 1-foot putt to fall back to 5 under.

“It was a little bit of a letdown, but I had a lot of holes left,” said Huston, playing just his third tournament on the senior circuit since turning 50 on June 1.

Undeterred, Huston then rallied with four birdies in the next five holes and avoided trouble the rest of the round. That left him and a dozen other players within five shots of the lead heading to Sunday’s final round.

“We’ll all have our work cut out for us trying to track him down,” Huston said.

Wiebe finished second to Nick Price at the Toshiba Classic in March – he lost by only one shot after Price opened with a 60 – and won two weeks ago at Rock Barn, and that has sent his confidence to a new level.

“I kind of felt, although I didn’t win (the Toshiba), I still had some game,” Wiebe said. “That was a big confidence builder. Of course, any time you win your confidence level is a little higher, but I think the challenge is to keep your expectations down because when you win and you’ve had some success you start expecting more. That’s a challenge to not let your expectations get goofy.”

Not likely considering who’s in the chase here.

“Two weeks ago, I got my confidence level up. Winning is a great thrill, I have to tell you,” Wiebe said. “But I won’t think about that until this tournament is over. There’s a whole bunch of guys that have a chance and you can really build momentum the first five or six holes. You can really get it going, and if you get going you can really shoot low. We’ll see what happens.

“I just know I have a cush (ion), but it could be gone after the first hole. But I’d much rather be two up than two back without a doubt.”

Wiebe made it 27 straight holes without a bogey at En-Joie when he parred No. 9. He made a nice par save at No. 15 after a poor drive, drained a 25-foot birdie putt at No. 16, and finished with a birdie try that somehow stayed out of the hole, coming to rest on the lip as Wiebe stared skyward on the 18th green.

Price, who started the day one shot behind, made four birdies on the front side to reach 10 under and tie Wiebe at the top of the leaderboard. He faltered at No. 13, driving the right rough, punching out before missing a 10-foot par putt to fall a shot behind. It was his first bogey since the second round at Rock Barn.

Price also found trouble at No. 15, which is guarded by a huge water hazard along the left of the fairway, and didn’t escape. He drove into the water and made double bogey.

Watson, who hadn’t played the course since the 1976 B.C. Open, opened with a 72 Friday and moved into contention with four birdies on the front nine Saturday. He could have gone even lower before making the turn. His second shot at the par-4 ninth hole landed above the pin and spun back down a gentle slope within 6 feet, but his birdie try lipped out.

Watson regrouped with two birdies on the first three holes on the back side, but his charge came to an abrupt halt when he hit into water hazards at Nos. 14 and 15 and dropped three shots.

Watson, playing for the first time since he won the Senior PGA Championship a month ago, rallied with birdies at 16 and 18, sticking his second shot at the par-4 closing hole within 3 feet of the pin as the gallery cheered.

“Two bad shots there,” he said after signing his card. “It was a pretty good round of golf, except for those two shots. I needed to get to at least 8 under par. Those two water balls kind of shot me out of it, I think.”

Divots: Wiebe has won two of three when he’s been the leader after two rounds. … Peter Jacobsen is at 6 under and in line for his best finish since a T5 at the 2007 Toshiba Classic. … Hole No. 15 remains the most difficult. There have been just 13 birdies through two rounds. 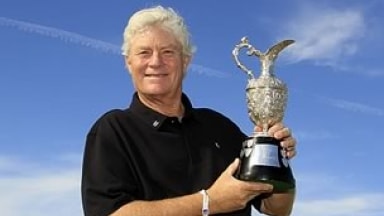 Rain and humidity have played a big role through two rounds of the U.S. Senior Open at Inverness Club. 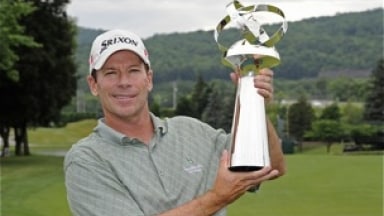