The story behind Spieth's 'Go get that' line to Greller 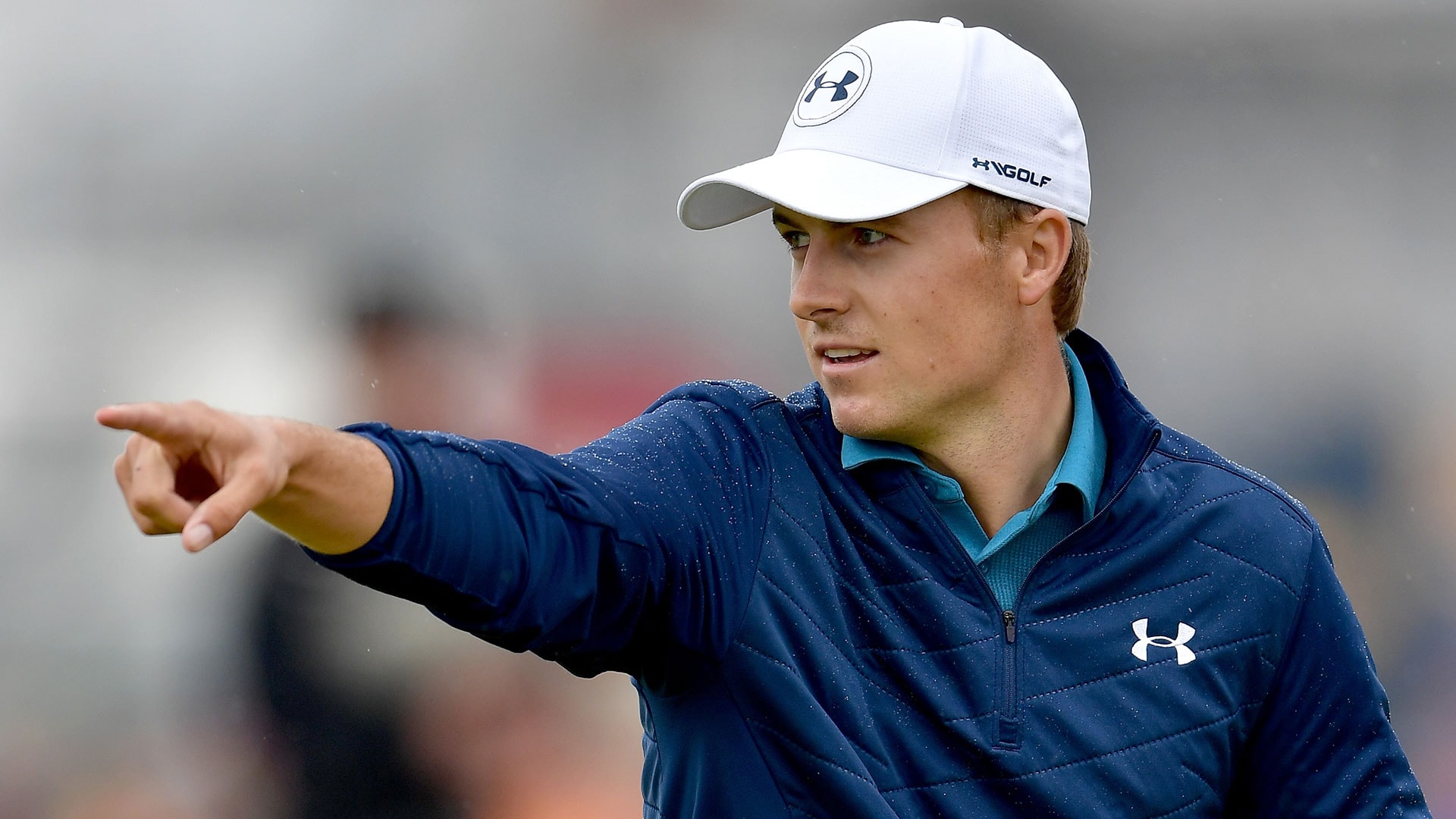 With three words, Jordan Spieth delivered a British Open moment as memorable as the 50-foot eagle putt that prompted his famous line.

He was telling Michael Greller to get his ball from the cup as Spieth stood to the side of the 15th green, still soaking up the significance of such a long eagle putt that restored his lead with three holes to play.

And there's a story behind it.

The reaction, while entirely spontaneous, might not have happened except for Spieth being in the makeshift gym all week at Royal Birkdale.

''I had been watching replays of the Open in the gym,'' Spieth said. ''There was a TV in there, and they were playing old Opens. For whatever reason, it intrigued me earlier in the week that the guys, when they made putts, they never went and picked their ball out of the hole. The caddie went and got it on long putts. And I guess that stuck in my head: 'You don't have to pick the ball out of the hole. Michael can go get it.'''

There was more to the moment, of course.

Two holes earlier, Spieth missed the 13th fairway so far to the right that it hit a spectator in the head and caromed into the dunes. When he found it, he realized the driving range was not out of bounds, took a drop, had to take relief from the equipment truck and sent Greller toward the green to scout out the shot. The whole process took some 20 minutes as Matt Kuchar waited at the green.

On the 15th hole, he was in a bunker in two and blasted out to about 6 feet, and then Spieth made his 50-foot eagle putt.

''Michael, when I looked over, he's laughing,'' Spieth said. ''For whatever reason, I didn't want to walk all the way up there. It was pretty far away. He started to walk toward the bag, but I was already walking toward the bag and I was really intense at that point. 'Michael, go get that!'

''It was half being serious, like: 'Go get it quickly because Kuch still needs to putt and we don't need to drag this on. I've already been in his way too much the last couple of holes. Let's not do that anymore.' And it was half intense - 'Pick that ball out of the hole.'''

Either way, Greller went and got it. Spieth added two birdies and his name was etched into the silver claret jug.

MASTERS UPDATE: Some of the best mail during the holidays is a simple white envelope from Augusta National, officially extending invitations to those who have met criteria for the Masters (and for past major champions no longer exempt who will be honorary invitees).

At the end of the year, 80 players already were eligible and expected to compete, a list that includes (for now) Tiger Woods.

That's two fewer than at this time a year ago, increasing the odds that the Masters again will meet its target of having fewer than 100 players at Augusta National the first full week in April. Having a small field is important to the club. The Masters has not had more than 100 players since 1966.

One spot awarded next month is reserved for the Latin American Amateur champion. No more than 13 spots will be available for winners of PGA Tour events (except for the new Dominican Republic event held opposite the Match Play). One of those is at the Sentry Tournament of Champions, where all but seven players at Kapalua already are exempt.

There also is one more chance for players to qualify by being among the top 50 in the world on March 25.

TOUR LEVELS: Kevin Kisner has learned all about the different levels of the PGA Tour based on performance.

It starts with getting a PGA Tour card, a big deal until players realize they are limited in where they can play. Kisner didn't play a tournament with guaranteed money and no cut until two years ago at the Bridgestone Invitational.

The next stage is keeping a full tour card, followed by winning.

At the close of a year that saw him win Colonial for his second PGA Tour title and make his first U.S. team at the Presidents Cup, Kisner noticed something else about his change in fortunes.

''The tournaments I play now, I don't even see half the guys I used to see all the time,'' he said.

There's also the case of Scott Brown, one of his best friends who grew up with Kisner in Aiken, South Carolina, and is a member with him at Palmetto Golf Club.

Brown was a rookie in 2012, and Kisner had returned for a second season on the PGA Tour after losing his card. They played 23 of the same 24 events that year, the difference being Brown played the Valspar Championship at Innisbrook and Kisner played the Houston Open.

Fast forward five years, and Brown played 32 times in 2017. Kisner was only in 17 of those tournaments. The seven tournaments Kisner played that Brown didn't were three majors (Masters, U.S. Open and British Open), three World Golf Championships and the Tour Championship.

Kisner doesn't play the tournaments he did in 2012. He builds his schedule around the big events.

''Any time you move up in the world ranking, you change your schedule and your outlook,'' Kisner said. ''You start working around majors and World Golf Championships instead of playing every tournament you want to play.''

WORLD RANKING: Only one award is given for the Official World Golf Ranking, and Dustin Johnson earned that three months ago. He will be presented next year with the Mark H. McCormack trophy for most PGA Tour events in a calendar year.

But to look only at ranking points earned in 2017, it was tight at the top.

Jordan Spieth earned 450.43 points, finishing one-third of a point ahead of Johnson (450.12). PGA Tour player of the year Justin Thomas kept it even closer by earning 446.43 points. They were followed by Jon Rahm and Justin Rose.

The other players in the top 10 were Rickie Fowler, Hideki Matsuyama, Marc Leishman, Brooks Koepka and Tommy Fleetwood.

TALE OF TWO YEARS: Kevin Chappell won his first PGA Tour title this year at the Texas Open, sending him to Kapalua for the first time.

But was it his best year? Better than last year?

A year ago, Chappell was runner-up three times, losing in a playoff at the Tour Championship (won by Rory McIlroy) and to a birdie-par finish by Jason Day at Bay Hill. He had seven top 10s, was No. 8 in the FedEx Cup and finished the year at No. 32 in the world.

The Texas Open was his only serious chance to win this year. He finished at No. 27 in the FedEx Cup and ends the year at No. 34.

Chappell attributed the difference to some back issues and untimely illnesses that kept him from getting any momentum.

What made this year memorable was playing on his first Presidents Cup team. He earned the 10th and final spot by 0.073 points over Charley Hoffman, and went 1-1-1 in a resounding victory at Liberty National.

And he won't be waiting until the January to get started on a new year. He leaves for Maui right after Christmas.

DIVOTS: Twenty players who began 2017 outside the top 50 finished the year in the top 50. The biggest jump belonged to Patrick Cantlay, who had been out of golf for nearly three years and started at No. 1,866. He ended the year at No. 38. ... Tiger Woods ends the year at No. 656 in the world, just four spots lower than he began in 2017. He played seven rounds of golf and had a missed cut, a withdrawal and a tie for ninth in the 18-man field at the Hero World Challenge. ... Dustin Johnson has to keep his No. 1 ranking for seven weeks to start 2018 to become only the fifth player to hold the No. 1 ranking for an entire year.

STAT OF THE WEEK: Jason Day and Rory McIlroy ended last year at No. 1 and No. 2 in the world. Neither won a tournament and ended this year out of the top 10.

FINAL WORD: ''I know I'm constantly going to get reminded of what I did last year versus this year and whether it's better or whether it's worse. I think the hardest part is going to be staying in the moment and recognizing that it's a new year. It's a new opportunity for great things.'' - Justin Thomas.