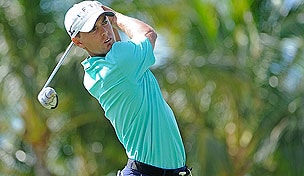 The PGA Tour returns to the continental U.S. this week with the revamped Humana Challenge. Normally a wide-open event, this year's field is much stronger than in years past as the tournament has modified the amateur portion of the event and returned to a 72-hole format. Played across three different California courses, the Humana will test players' ability to adapt to seeing a new course each afternoon. Here is a look inside the numbers to see which players may contend for the title this weekend and help your Golf Channel Fantasy Challenge team in the process:

Par-5 Prowess: Unlike at Waialae CC last week – where players saw only two par-5s each day – players at the Humana Challenge will confront five par-5s during their rounds on the Palmer Course at PGA West. Since 1999, these five holes have ranked as the five easiest on the course based on stroke average during the tournament, with the hardest hole of the group (No. 14) still averaging well below par at 4.725. As the tournament concludes Sunday, the ability to take advantage of these par-5s will be important for players looking to distance themselves from the field. Two names to watch will be Kyle Stanley and Brendon de Jonge, both of whom played well last week and ranked in the top 10 in par-5 performance last season.

Picking Up Strokes: Comparing a player's putting performance to Tour averages based on putt length, strokes gained putting can be a useful tool when trying to predict who will make more than his fair share of putts at each event. This week, on courses where red numbers will be plentiful, that statistic may prove increasingly important. One player consistently ranked near the top in this category is Greg Chalmers, who will make his 2012 season debut at the Humana. Chalmers has finished among the top 10 on Tour in strokes gained putting each of the last three seasons, including fifth in 2011, and will be looking to improve on his T-11 finish at this event in 2011. Along those same lines, Bryce Molder and Kevin Na are two players in the field whose strong showing in this category last season (third and eighth, respectively) helped propel them both to victories during the 2011 Fall Series.

Starting a New Chapter: Since Mike Weir won here in 2003, each winner of this event did not have a victory on the PGA Tour the previous season. This is a promising trend for players like Chez Reavie and Jason Dufner, both of whom had strong 2011 campaigns but failed to win an event. Both have played well here before, with Reavie finishing T-5 in 2008 and Dufner finishing no worse than T-34 in each of his last three Humana starts.

Birdie Barrage: Played across some of the easier courses Tour players will see all year, this event typically yields low scores all week. Of the 51 courses played during the 2011 PGA Tour season, the Nicklaus Course at PGA West ranked as the 49th most difficult venue. Not to be outdone, the Palmer Course came in right behind it at No. 50. An emphasis will be on making birdies early and often which should bode well for Charles Howell III. In addition to his runner-up finish last week at the Sony Open, Howell III also finished eighth on Tour last season in both scoring average (69.66) and par-5 performance (4.56).

Out of Nowhere: Last year's event saw Jhonattan Vegas emerge from obscurity to capture his first PGA Tour win in a two-hole playoff. In recent years, players like Pat Perez and Charley Hoffman have used this event to notch their first career victory on Tour as well. With this year's field stronger than in years past, it may be more difficult for a relative “unknown” to take home the trophy on Sunday. Still some players seeking their first win may be worth watching, including Spencer Levin, who was in contention at the Sony before falling back on Sunday and whose 69.85 scoring average in 2011 shows his ability to go low when required.

Sleeper Alert: This week's under-the-radar player to consider as you set your fantasy lineup is Brian Gay. One of the more consistent ball-strikers on Tour, Gay translated fairways hit into lower scores in 2011 while finishing T-26 in scoring average. He boasts a strong history at this event, having improved his finish each of the last four years as he climbed from T-38 in 2008 to T-5 in 2011 – amassing an impressive 67.95 stroke average here in the process. Gay also finished seventh in scrambling and 17th in strokes gained putting in 2011, showcasing his stellar play around the greens last season. Already off to a strong start in 2012 with a T-6 finish last week at the Sony Open, Gay is a Group 3 player who may contend for the title down the stretch.