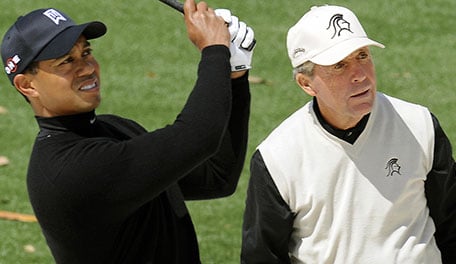 Each week, GolfChannel.com takes a look back at the week in golf. In this edition of After Further Review, our writers weigh in on Gary Player's offer to "fix" Tiger Woods in just one hour, the Inbee Park-Stacy lewis rivalry that was once again on display in Taiwan and Dustin Johnson's absence from the PGA Tour.

What is it about Tiger Woods that makes some of the game's biggest names not only believe he needs fixing, but that a few minutes is all they'd need to fix him themselves?

Gary Player added his name this week to a growing list that includes Lee Trevino, Paul Azinger and others. In an interview with Yahoo! Sports, the Black Knight suggested an hour-long sitdown would be the impetus to add to Woods' stalled major championship total.

All of which leaves Woods with two choices: He can take up these legends on their offers and prove them right or wrong, or he can continue tacking articles to an ever-growing bulletin board filled with quotes from those who doubt his current path.

Unless you haven't been paying attention these last two decades, it shouldn't come as a surprise that he'll undoubtedly pick the latter option. – Jason Sobel

Inbee Park and Stacy Lewis seem determined to put an exclamation point on a terrific season for the LPGA. How often do we actually get to see players ranked No. 1 and No. 2 in the world duel in Sunday finishes? The duo treated fans of the women’s game to just that with Park winning Sunday at the Fubon LPGA Taiwan Championship to set up a potentially electric finish to the year with both players in heated battles for some of game’s biggest prizes. Their duel now extends to season-long awards with just three tour events left in 2014.

Park overtook Lewis for the Rolex No. 1 ranking just days before winning in Taiwan, but they aren’t just 1-2 in world ranking points. They’re 1-2 in the competition for every meaningful award left to be claimed this season, with Lewis still having the upper hand in those other battles. Lewis is first in Rolex Player of the Year points, in Race to the CME Globe points, in the Vare Trophy competition for low scoring average and in official money winnings. Park is second but narrowing the gap in every one of those races. In a year filled with compelling storylines, Park and Lewis seem poised to take the drama to the last putt of the season. – Randall Mell

There was a school of thought that suggested golf was at its best when Phil Mickelson was at his best. For more than a decade Tiger Woods dominated the game with ruthless flawlessness, but on a precious few occasions Woods was challenged by Lefty, like at the 2005 Ford Championship when the two went toe-to-toe on Sunday at Doral. The same can now be said for Stacy Lewis and Inbee Park. On Sunday at the Fubon LPGA Taiwan Championship, the world’s Nos. 1 and 2 - Park and Lewis respectively - enjoyed such a head-to-head; and women’s golf was at its best. – Rex Hoggard

The interview schedule at the WGC-HSBC Champions might be a little light this week, what with no defending champion. It’s been 12 months since Dustin Johnson left China with the trophy, and it’s been three months since he last played on the PGA Tour. When Johnson announced his leave of absence, which was followed by a report of a drug suspension that both he and the Tour subsequently denied, this week’s lack of a title defense was forecast as an understandably high point of awkwardness.

Johnson’s return to action remains unknown, though there appears to be a chance that fiancée Paulina Gretzky will give birth to their first child before he tees it up again in competition. At least there’s one silver lining for him during his sabbatical: thanks to the quirks of the OWGR, Johnson has moved up from 17th to 15th while his clubs have been collecting dust. – Will Gray