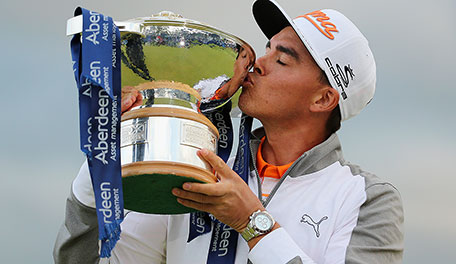 Rickie Fowler earned his second big worldwide victory of the year on Sunday, finishing with a flurry of birdies to win the Scottish Open by one stroke over Matt Kuchar and Raphael Jacquelin.

What it means: With the victory, Fowler cemented his status as one of the favorites at next week’s Open Championship, and as a player who can close out tournaments, instead of a guy known more for his flashy clothes than his game, a stigma he’s carried since turning pro in 2010. Now he will try to go after the “Mickelson double” by following up his Scottish Open victory by hoisting the claret jug just seven days later, an accomplishment Lefty pulled off in 2013.

Round of the day: Quite a few players carded scores better than Fowler’s 2-under 68 on Sunday, but the 26-year-old earned this honor by the way he finished his round. After making a bogey on the par-4 14th, Fowler suddenly needed a comeback reminiscent of his Sunday at The Players in May, and he delivered. Fowler birdied three of his final four holes, including the 72nd hole where he hit a wedge from 102 yards to a couple feet from the flagstick. That final circle put him a stroke ahead of Matt Kuchar, who was in the clubhouse at 11 under and hoping to get into a playoff.

Best of the rest: Scotland’s own Marc Warren carded a 6-under 64 that included an inward nine of 30, moving up 41 spots to T-4 in the process. Sweden’s Rikard Karlberg moved up 57 spots with a 64 of his own. His T-10 finish gets him into the Open Championship. Jacquelin (70) and Brooks (73) earned the other two spots available for the year’s third major.

Biggest disappointment: Brooks can take solace in the fact that he earned his way into the Open this week, but he blew a great chance at his second European Tour win, and first since the shortened 2014 Madeira Islands Open, which was marred by the death of a caddie. The 28-year-old Englishman came into the day leading by one, but got off to a rough start with a bogey on the first hole and never recovered, making only one birdie in a final-round 73.

Shot of the day: Fowler’s wedge on the final hole pretty much clinched his fourth worldwide win, but he got a scare while in the scorer’s tent when Jacquelin nearly did him one better. Needing an eagle on the final hole to force a playoff, the Frenchman nearly holed his approach shot, leaving a kick-in for birdie to finish one back.

Main storyline heading into the Open: Jordan Spieth is grabbing all the headlines in the U.S., and rightfully so, but Fowler, who had missed two straight cuts coming into the Scottish Open has once again forced himself into the conversation of “best young players.” It would be hard to bet against him if he’s in contention on Sunday at St. Andrews, especially considering his strong play on links courses even before this week. He finished T-2 at the Open Championship last year.

Quote of the day: “I had to really dig deep, made some good swings coming in … and saved the best swings for last.” – Fowler.