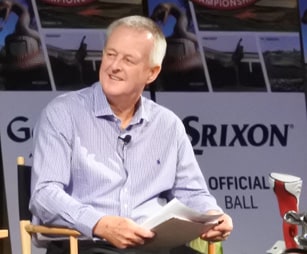 PALM HARBOR, Fla. -- The nearly 600 golfers playing in this week’s Golf Channel Amateur Senior Nationals aren't allowed to get advice on the course while competing (unless it's from their caddies), but they got a little on the eve of the first round from Martin Hall at the annual welcome dinner.

While discussing the Europeans' recent success in the Ryder Cup, Hall offered this assessment of the Euros:

"The Europeans take the game seriously," said Hall, one of the world’s best instructors and host of Golf Channel's School of Golf. "But they don’t take themselves too seriously."

Hall as well as the Golf Channel’s Rich Lerner and Tim Rosaforte were on stage at Sunday’s night’s welcome dinner at Innisbrook Resort & Spa. While they discussed topics like the Ryder Cup and Tiger Woods' possible return to golf, it might have been Hall's advice that drew the most interest from the audience.

His point about the Europeans is that they don't seem to be put as much pressure on themselves than perhaps the Americans do. They've figured out how to relax and remain focused. "You have to not try too hard," said Hall, who also shared that sports psychologist Bob Rotella once told him on a scale of 1 to 10, the effort level should be around a 4.

Hall had plenty more advice and even joked that he might even be able to offer a few tips on the range the next morning for any golfers who are struggling with their mechanics. Then he shared four pieces of wisdom he got from Jack Nicklaus, when he worked for the Golden Bear as a staff member of the Nicklaus Golf Schools.

The first one, Hall said, is "don’t try to play beyond your capabilities… I like to refer to the Annika (Sorenstam) rule here. If you don't feel like you have a 70-percent chance of pulling off the shot, don’t do it."

No. 3 is to avoid being overly aggressive.

And the fourth is that the biggest mistake most golfers make is failure to manage the golf course.

"You’ve got to get the ball in play off the tee," Martin said. "You don't have to hit a driver all the time.

"If you do this," he told the golfers in the audience, "I think you’ll get a lot out of these four days." 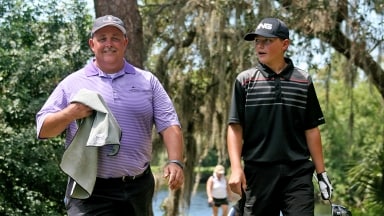