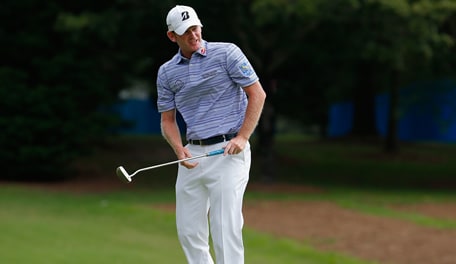 Brandt Snedeker and Jason Dufner both rolled in birdies over the final two holes to seal a two-shot victory at the Franklin Templeton Shootout in Naples, Fla.

This is the first victory for either player in the two-man, 54-hole event. The pair began the day one shot behind Daniel Berger and Charley Hoffman but moved to the top of the standings after an 11-under 61 during Saturday's best-ball round.

Second place went to Matt Kuchar and Harris English, who teamed for a victory in Naples in 2013 but came up just short for the second straight year. Berger and Hoffman finished alone in third, three shots behind the winners.

Snedeker and Dufner were tied for the lead at 28 under heading to the par-5 17th, where Dufner rolled in a short birdie to give the duo sole possession of the lead. After Kuchar and English failed to birdie No. 18, Snedeker needed only two putts from 25 feet to win but instead rolled in one last birdie putt.

"I just think we're a great partnership," Snedeker said. "When one of us was out of a hole, the other seemed to make a birdie or a putt or a chip and got us right back in it. It worked out great, kind of one of those perfect weeks."

While it does not count as an official victory, this marks Snedeker's second trophy this year after his victory at the AT&T Pebble Beach National Pro-Am. Dufner had not won an event since the 2013 PGA Championship.