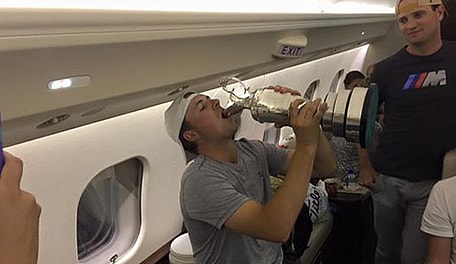 AKRON, Ohio – The claret jug is not the Stanley Cup – at least not in the eyes of Jordan Spieth.

While many hockey players refuse to touch the trophy until they are lifting it as a champion, Spieth sipped from the jug only hours after Zach Johnson edged him out last month at the Open Championship. Pictures of the moment quickly took social media by storm, but Spieth said Wednesday at the WGC-Bridgestone Invitational that the thought of jinxing himself never crossed his mind.

“I don’t believe in jinx. If I did, I wouldn’t be sitting here in front of you right now,” Spieth said. “Zach’s a good friend. We were all, there (were) seven or eight of us PGA Tour players on that plane and everybody wanted to take part in his celebration.”

At 22 years old, Spieth will likely contend for the Open Championship for decades to come, and he boasted with a smile curled across his lips that a swig from the trophy on a cross-continental flight likely won’t impact his chances to one day hoist it himself.

“I’m sure there have been people in the past that have sipped out of the jug and then won it,” he said.

“I don’t think if I have the chance on 18 next year, if I have a chance to two-putt for a win, I don’t think it’s going to force me to three- or four-putt because I sipped out of the jug.”