What was he inking? Bubba gets an anniversary tattoo 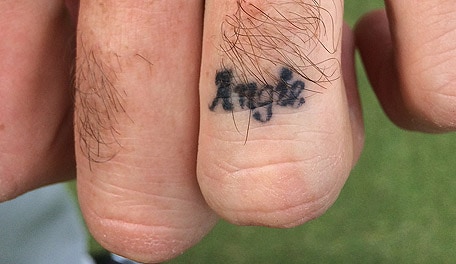 WINDERMERE, Fla. – For his 10-year wedding anniversary, Bubba Watson chose to honor his wife. With a tattoo.

Watson explained that although he owns two wedding bands, he doesn’t like the feeling of wearing one while playing golf, so he got a tattoo of his wife’s name, Angie, on his left ring finger.

Angie Watson also got a tattoo, with the initials BW inside the Christian fish symbol. They got them on Aug. 11 in Pensacola, Fla., in advance of their Sept. 1 anniversary.

“They had no idea who I was,” the two-time Masters champion said of the tattoo artists. “Different culture.”

“I think tattoos are cool when I see them on other people, but I don’t personally like tattoos,” Watson said. “But this is about my wife and showing her I care about her.”