Golfers Who Give Back: Bill Clinton 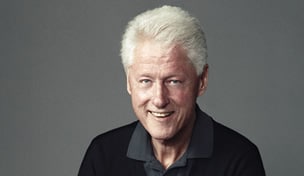 Less than a week after his stirring speech at the Democratic National Convention, former President Bill Clinton brought that same charisma and a healthy golf game to Liberty National in Jersey City, N.J., where for six hours he took 'about 85' strokes in Mario Batali's annual charity event. Engrossed as ever with the game introduced to him at age 12 by an uncle, Clinton, 66, can talk golf for hours. Especially if the conversation includes the PGA Tour's Humana Challenge and the Clinton Foundation's partnership through its Health Matters conference that's making the former Bob Hope Desert Classic one of the California Swing's important events.

Q: Seems like golf's a priority for you again.

Q: Which round was most memorable?

A: This summer I got to go back and play Shinnecock with my friend Jimmy Dunne. I just adore it there. You get in those first seven holes, in that bowl, it's eerily quiet - magnificently quiet - and you realize you're living in a temple of golf. The wind was blowing, and I always figure if I break 90 there, I'm doing all right.

A: I think I shot a 76 once on a little course down the hill from Camp David. On the back nine there's a par 5 nearly 600 yards long. One time when I was president I got within five yards of getting there in two. Another time, I was playing a course in Calgary, and after I made a 30-foot birdie putt on 16 I had a chance to shoot 78 or 79 even if I bogeyed out. But I had to quit because I was late to give a speech.

Q: You credit a 5-iron to an inch on a par 3 when you were 15 as the shot that hooked you on the game. Was there a moment in the past few years that has kept you hooked?

A: My best golf came during the first year I was out of the White House. I was still strong, could hit the ball a long ways, and I got down to a 10-handicap. And then when I started working in Haiti and didn't stop anything else, I quit playing for a couple of years except at odd times. I also had a second heart procedure that made me change my diet and made me weaker, and I just wasn't playing very well. I went out and broke 85 one day and started hitting the ball a long way again. I thought, Well, I'm not dead yet. That's the way it is. Just when you get ready to give up, something wonderful happens.

Q: Golf Digest readers love our What's in My Bag feature with tour players. What's in your bag right now?

A: I have the newest TaylorMade driver, 3-wood and 5-wood. I've had trouble the last several years getting a 3-wood I can hit consistently, but I can hit this one. I've got an old 23-degree Callaway hybrid club. And I've got some TaylorMade irons that are not the latest edition, but I hit them pretty well. I play some old Callaway irons when I'm home. And I've got an old Odyssey 2-Ball putter with a black insert, not a white insert. It's a mallet head that I like for two reasons: One, I can putt from off the green pretty well with it and judge the distance fairly well, and two, ever since I turned 40 my eyesight's not so good, and this one has three lines so it's easier to line up a putt. Most of the time I don't carry a 3- or 4-iron. I'll take a lob wedge 'cause I'm in bunkers a lot, and it helps me get out and not go over the green as much. [Laughs.]

Q: President Bush (43) said it was inappropriate for him to play golf while those in our armed forces were risking their lives overseas, and President Obama has been criticized for playing too much golf. How do you feel about the president playing golf?

A: I never feel bad when I see a president on a golf course. Presidents need to rest their minds, not just their bodies. They need the exercise, the fresh air. And they need to do something that, literally, takes them away from what they're doing. The day I played with President Obama, I'd had about three hours' sleep, and I was so exhausted I could barely stand up. But when the president calls and asks you to play golf, you show up.

A: He actually beat me by a stroke that day. Normally he wouldn't because I've been playing so much longer than he has, but he did pretty well that day, even though he's prone to scoop it a little bit instead of hit down to it. The skills that make him good on a basketball court, the fact he's long, wiry and fit, give him a nice swing. When he leaves the White House, he could be down in the single digits if he wants.

Q: The Clinton Foundation's partnership with the Humana Challenge effectively resuscitated the former Bob Hope Desert Classic. What did you learn in year one?

A: I learned that these golfers really do care, that they wanted to see Bob Hope's legacy kept alive, and that they like to give. I've also been impressed with golfers' commitments to health, and one of my favorites is Notah Begay. He's had a very successful career as a player, but if he had cared less about his people and improving health and other things for Native Americans, he would've won a lot more tournaments. I've found a lot of golfers who do this not because it's a mark they check for their accountant but because they want to make a difference. Phil Mickelson is very serious about it. I was at the opening of Tiger Woods' school in Southern California, and it's as good of a program as I've ever seen. Tiger's trying to have a discernible impact on the education of kids who he knew wouldn't get those opportunities otherwise. Those are just a few examples. I could give you more.

Q: Where do you get this passion for improving the health and wellness of our younger generation?

A: We spend over $140 billion in this country treating completely avoidable health problems. Many of them are rising out of diabetes, including heart problems, stroke problems and a lot of other things. If we want to bring down our health-care costs, we've got to take better care of ourselves.

Q: Are there health benefits to playing golf?

A: Absolutely. If you walk a hilly course on a windy day and you play all 18 holes, you won't say golf isn't a sport and golfers aren't athletes. I'm convinced one of the reasons my late stepfather lived to 89 and lived as well as he did was because he played a lot of golf.

Q: Do you walk or ride when you play?

A: When I can, I like to walk. Even if you walk just half the time, playing golf makes a big difference to your health as you get older. That's one of the great things about this game.