Bradley's 63 gives fans something to cheer about 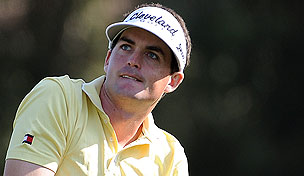 NORTON, Mass. – The grandstand behind the 18th green was nearly full at noon Sunday, despite the final group not getting under way for another two hours. That crowd included one most interested spectator.

The Deutsche Bank Championship is a home game for Keegan Bradley, the former St. John’s standout and New England native. And for the first time in his career, his grandmother attended one of his tournaments Sunday.

The night before, she told Keegan’s mother that she wanted him to shoot 63, even though he hadn’t broken par in the first two rounds at TPC Boston. But with an assist from his caddie and swing coach, the 2011 PGA champion was more than happy to oblige, getting up-and-down on the last hole to shoot 63 and go from the cut line to the fringes of contention.

On Saturday afternoon, Bradley birdied his last two holes – he made a 30-footer on his second-to-last hole and a 12-footer on the last – to post a 36-hole score of 2-over 144. Convinced that it wouldn’t be enough to stick around, he cleaned out his locker and began looking for flights. Later, he learned that he’d made the cut on the number, so he made two phone calls to his swing coach, Jim McLean, and sent along four videos of his action.

“It was honestly pretty violent,” Bradley said. “It was the most lost I’ve felt on the course in a long time.”

Per usual, McLean quickly determined the problem – timing with Keegan’s upper body – and Bradley headed to the course Sunday buoyed not only by the swing thought, but by the fact that his regular caddie, Steven “Pepsi” Hale, who had missed the first two days because of a family emergency, would be on the bag for the third round. Hale took a red-eye flight Saturday night and arrived 20 minutes before their 7:55 a.m. tee time.

“It felt so weird out there without him, so bizarre,” Bradley said. “I realized how good of a caddie he is, and how much I rely on him. It was an eye-opener for me in a lot of ways because when we were walking down the first hole, it felt right and normal again.”

Bradley eagled the second hole, turned in 5-under 31 and then rattled off four more birdies as he headed to the final two holes. From the middle of the 17th fairway, Bradley’s tee shot came to rest in a divot, and his approach sailed too far left and caught the greenside bunker, leading to a bogey. On the par-5 18th, his second shot was “probably two feet” from being perfect. Instead, the ball caromed off a rock short of the green and ricocheted into the hazard. From 99 yards, Bradley stuck his fourth shot to 4 ½ feet, and he sunk the putt for an all-world par save, much to the delight of the hometown fans.

“I’m just glad that I finally got that chance today to shoot a good round and hear the crowd,” said Bradley, who is at 6-under 207. “It meant a lot for me to hear everybody do that.” 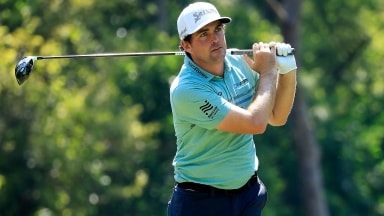