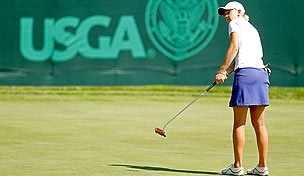 The USGA appointed five players on Wednesday to the United States Curtis Cup team for the 37th edition of the matches to be played June 8-10 at The Nairn Golf Club in Scotland.

The three remaining players on the eight-player squad will be announced in January.

Duncan finished as the low amateur at the 2011 U.S. Women's Open, representing Duke. Anderson, a junior at North Dakota State University, won the 2009 U.S. Girls’ Junior and was the fourth-best amateur at the ’11 Women’s Open.

All five players finished within the top 20 at the 2011 NCAA Division I Championship. Duncan, Ernst and Pancake were named to the 2011 NGCA All-American first team, while Anderson and Lua received second-team honors.

Great Britain and Ireland defeated the United States, 11.5 to 8.5, to win the biennial Curtis Cup.