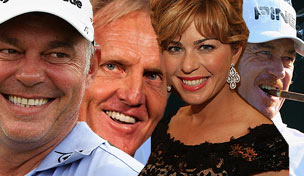 Getty Images
A determined fan waits by the eighth green during the first round of the Constellation Energy Classic at Hayfields Country Club in Hunt Valley, Maryland on September 15, 2006.Photo by Michael Cohen/WireImage.com  -

As the party is under way at the par-3 16th at TPC Scottsdale, the Golf Guy and Birdie Bailey decide to take it a step further and unveil the golfers they would most like to party with.

Miguel Angel Jimenez: Gotta love partying with a guy whose middle name is Angel – which usually means the opposite. As his agent Chubby Chandler recently offered the Golf Guy, Miguel is the second-funniest guy on tour behind Lee Westwood. Good enough for me. Plus, Jimenez has a passion for fine wine and good cigars. And, he sports a robust belly, resembling a man who thoroughly enjoys red meat. A Roman good time!

Laura Davies: She loves to gamble. A woman who likes to gamble? That is a woman I would forever like to spend time with. She's the type of lady who would rather hang out with the guys around the grill than with the women shopping. Her affinity for fast cars, casinos and playing pool led her mother to once say, 'She makes my hair stand on end.' When someone's mother says something like that, it usually means the daughter is one kick-ass fun dame.

Matt Every/Robert Garrigus: The new Cheech and Chong on the PGA Tour. Just kidding. Kinda. Either way, I want to 'chill' with these two dudes.

I may be a twenty-something, but my definition of partying doesn’t involve Jello shots or Jaeger Bombs. Call me an old soul, but when I compiled my list of golfers I’d most like to party with, I went for a combination of culture, comedy and good conversationalists.

Darren Clarke may have sworn off alcohol for 2012 in an effort to beef up his health and slim down his waistline, but beer or no beer, I have a feeling Clarke would be the rowdiest of the bunch in any bar he visits. Even if he’s not drinking from the claret jug, that doesn’t mean he wouldn’t let the rest of us.

Paula Creamer is the LPGA’s girl-next-door, the gal everyone would like to get to know. And what we do know of her personality, I think she’d be an absolute doll to spend the evening with, bar hopping, dancing and swapping stories while sipping on martinis.

From what I’ve heard, Greg Norman commands the attention of every room he enters. He’s accomplished – both in golf and in business – and has done and seen it all. I’d love to visit his vineyards and discuss worldly topics while sampling his signature wines.