Henry leads by 1 after course-record 60 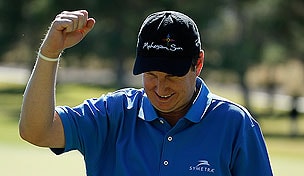 Putts were falling early and often Thursday at TPC Summerlin, though no one fared better during the opening round of the Shriners Hospitals for Children Open than J.J. Henry. Here's how things look after one round in Las Vegas, where Henry leads by one shot after breaking the course record:

What it means: Henry's 11-under 60 broke the existing course record, and the TCU alum now holds a slim lead as he looks for his third-career PGA Tour victory. He'll need to keep his foot on the gas, though, as low scores are expected throughout the weekend amid ideal conditions at TPC Summerlin.

Round of the day: Beginning on the back nine, Henry went out in 4-under 32 and added three straight birdies on Nos. 4-6. He closed his opening round with a flurry, notching his ninth birdie of the round on the par-3 eighth before holing a 50-foot putt from off the fringe at the ninth for a closing eagle and new course record.

Best of the rest: Henry's round of 60 meant that Romero's 61 went somewhat under the radar, though it was no less impressive. The Argentine made his move during the middle of his round, playing the 11-hole stretch from Nos. 6-16 in 10 under par. It all added up to a solid start for Romero, who is making his first PGA Tour start since missing the cut at The Barclays in August.

Biggest disappointment: While many players went low Thursday at TPC Summerlin, there were a handful of outliers. One notable that surprisingly struggled was Brendon de Jonge, who carded a 3-over 74 just two weeks removed from his impressive performance at the Presidents Cup. The Zimbabwean stumbled to six bogeys in his opening round, and as a result will have significant work to do Friday in order to survive past the 36-hole cut.

Main storyline heading into Friday: The focus will be on Henry as he looks to back up his career-low round, but plenty of players remain within striking distance after one round. Included among the chase group is Byrd, who won this event in a playoff in 2011, and Simpson, one of the top-ranked players in this week's field who is still in search of his first victory since the 2012 U.S. Open.

Shot of the day: Two shots left Henry just short of the par-5 ninth green, a point from which he looked to get up and down to tie the existing course record. Instead, the Texan rolled in a putt off the fringe from more than 50 feet, finishing off his record round and breaking his personal PGA Tour record for low score.

Quote of the day: 'It was nice to make that putt on my last hole for a little eagle to make lunch taste that much better.' - Henry, whose previous low score on Tour was a 61 during the 2006 Waste Management Phoenix Open. 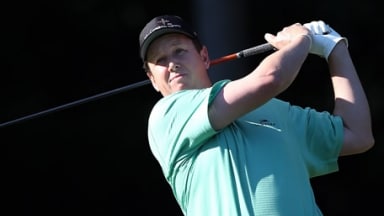 The list of players who have cracked the top 125 in PGA Tour earnings every year since 2001 is only eight names long. 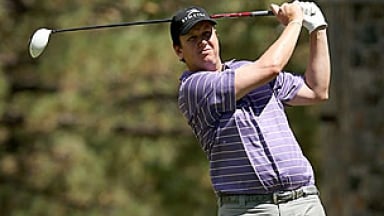 J.J. Henry fired an 11-under 60 Thursday at TPC Summerlin, breaking the course record while taking a one-shot lead in Las Vegas. 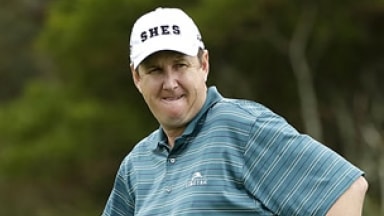 J.J. Henry slipped on a white golf cap that prompted questions because of the four letters stretched across the front. That was the whole idea.