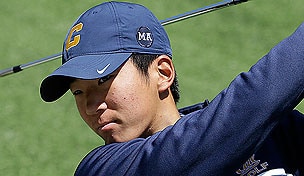 A good week is on the verge of getting much better for 20-year-old Michael Kim.

Just days after being named to the U.S. Walker Cup squad that will compete in September, Kim defeated Eric Sugimoto, 4&3, to advance to the final of the U.S. Amateur Public Links Championship, where he will meet Jordan Niebrugge with a berth to the 2014 Masters on the line.

Like Niebrugge, Kim won two matches for the second consecutive day, dispatching of Robby Shelton IV, 1-up, in the quarterfinals earlier Friday. A recipient of the Nicklaus Award as the best player in NCAA Division I golf this season, Kim was a standout on Cal's record-setting men's golf team this spring and earned low amateur honors at the U.S. Open last month.

Kim will meet Niebrugge, a rising sophomore at Oklahoma State, in the 36-hole final Saturday at Laurel Hill Golf Club in Lorton, Va. Niebrugge, 19, won his quarterfinal match 1-up Friday over 16-year-old Zecheng Dou before defeating James Erkenbeck, 3&2, in the semifinals. The winner of Saturday's final will receive an invitation to the Masters should he retain his amateur status until next year's event.

First held in 1922, the Public Links is designed for amateur players with no ties to private clubs or courses requiring membership. Earlier this year, the USGA announced that the event would be discontinued; beginning in 2015, it will be replaced by a Four-Ball Championship that will feature two-man teams.