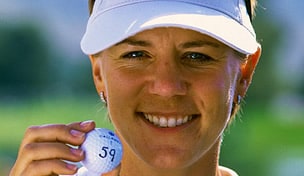 Getty Images
VERONA, NY - OCTOBER 02: Nicholas Thompson tees off on the 8th hole during the second round of the 2009 Turning Stone Resort Championship at Atunyote Golf Club held on October 2, 2009 in Verona, New York. (Photo by Chris Trotman/Getty Images)  -

As Tiger and Tour head back to the Monterey Peninsula for the AT&T Pebble Beach National Pro-Am and the LPGA begins its season Down Under, the Golf Guy is lucky to welcome a special guest to the Grill Room. And as always, rum and Cokes are on the house.

Hall of Famer Annika Sorenstam was kind enough to pull up a stool at the bar and answer some unimportant questions – which are the kind we here in the Grill Room want answered:

Favorite thing about golf: The challenge (precisely where Annika and I drift apart)

Grill Room Annika appetizers: 10 major championship victories; 72 career LPGA wins; eight Solheim Cup appearances with an overall record of 22-11-4; eight LPGA Player of the Year awards; crossed over golf and sports boundaries with her appearance at the 2003 Colonial – the first female golfer to play a PGA Tour event since 1945; enjoyed a stretch from 2001-2006 in which she played 24 majors, won eight and had seven other top-5 finishes; and my favorite ... fired a 59 at the Standard Register Ping at Moon Valley CC in Phoenix in 2001. Upon announcing her early retirement in 2008, Annika offered this up about her career, 'To single a few things out: shooting 59; my performance at the Colonial; winning 10 majors.'

In a recent GolfChannel.com poll, we asked, 'Would you rather be a Super Bowl winning QB or a major championship winner?'

The result: Major champion winner hovered around a resounding 80 percent.

Granted, we are a golf website, so result may not have been so surprising. But really? I voted Super Bowl winning QB.

But then I thought, 'What if the question was specific: Would you rather be a Super Bowl winning QB or winner of the Masters?'

That would have altered my answer. Instantly. It would have become a no-brainer. In fact, I would say that it would be my top choice in all of sports – Masters champion. A return trip to Augusta National every year, the green jacket, and, of course ... a seat at the annual Champions Dinner at Augusta National.

Name of the Week

Australian Katelyn Must: As in ... after shooting a 10-over 83 in the opening round of the Women's Australian Open ... Katelyn Must think about spending more time on the driving range.