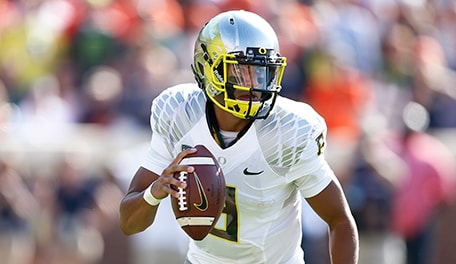 Heading into his redshirt junior season, the University of Oregon quarterback is a Heisman frontrunner and an early contender for the No. 1 pick in the 2015 NFL draft.

And his courseload this season consists of what everyone else just tries to squeeze in outside of work.

Oregon QB Marcus Mariota will be pretty focused on football this fall. His final 2 courses for credit this fall? Golf & yoga.

This rivals but fails to quite live up to Matt Leinart's famed ballroom dancing semester at USC.

Before this turns into one of those "The NCAA is a joke, these kids don't go to class, blah blah blah" discussions, we feel obligated to point out that Mariota graduated with his degree in general sciences this past spring, finishing undergrad a year ahead of schedule. You can find his major course requirements right here.

More to our point, Golf I and Golf II are listed along with Juggling I and Juggling II on Oregon's Physical Education Individual Activities class list.

The classes - the golf, not the juggling - are hosted and the River Ridge Golf Course, roughly 11 minutes from campus. Per the course description: "The majority of class time is at the driving range learning swing techniques for distance, pitching, chipping and putting, rules, etiquette, and golf vocabulary. Includes 4 free rounds of play during the term. Students must provide their own transportation. Repeatable once for a maximum of 2 credits."

Class meets twice a week in the middle-to-late afternoons.