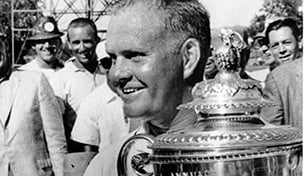 Getty Images
SILVIS, IL - JULY 11: Will MacKenzie reacts after a mishit ball in the 17th fairway during the second round of the 2008 John Deere Classic at TPC at Deere Run on Friday, July 11, 2008 in Silvis, Illinois. (Photo by Kevin C. Cox/Getty Images)  -

That magic number, the historically significant one which also reeks of irony and coincidence and a pinch of perfection considering its relevance in the game, wouldn’t have happened if on 18 separate occasions a few bounces didn’t go his way or a few putts hadn’t precipitously dropped into a few side pockets. Record books would have been irrevocably altered had he failed to win just one of these, and that includes the one that took place a half-century ago. Seventeen would just sound … unfinished.

Never mind that he barely even realized his 1963 PGA Championship win gave him a major at each of the three U.S. venues, joining an elite club which had previously only consisted of Ben Hogan, Gene Sarazen and Byron Nelson.

“I was too stupid to think about that at the time,” Nicklaus says now, thinking back to that tournament. “[I] was just trying to win the golf tournament.”

The chubby, cherubic Ohio boy wasn’t chasing history that week at Dallas Athletic Club. If anything, he was running from it. One week earlier, Nicklaus bogeyed the final two holes to finish in third place at the Open Championship, one stroke out of a playoff between Bob Charles and Phil Rodgers.

Still feeling the sting, he traveled stateside to find July temperatures in Texas staggeringly different than those at Royal Lytham & St. Annes.

How hot was it? An account of the event from Sports Illustrated titled, “Hottest Man in a Furnace,” posed a litany of ways. Three players withdrew simply because they couldn’t stand the heat. Gary Player, forever outfitted in his ubiquitous black, instead wore white. Dow Finsterwald offered up a dramatic mental image: “There have been lots of times when my shirt was soaked through, but today I sweated my pants through. I can’t remember ever doing that before.”

Nicklaus remembers the week for another reason, too. Prior to the opening round, the tournament held a long-drive contest for the competitors. (One can only imagine this was canceled in subsequent years due to too much frivolity for the players and overexcitement for the fans.) He won with a mammoth drive of 341 yards and received a money clip that was engraved, “DRIVING DISTANCE WINNER.”

He remembers this because the money clip has stayed in his pocket every day for the past 50 years.

Think about that for a minute: For all of the accolades and treasures heaped upon Nicklaus during his career, the one which has remained closest to him, joining him on journeys around the world, along for the ride on experiences fit for a king, is a money clip for winning a long-drive contest.

“That drive was 341 yards, 17 inches. I do remember that, too,” he says proudly. “That was an 11-degree wood driver, 32 ¾-inch Dynamic Edge shaft. Everybody used the same golf ball, so nobody had a preference on what golf ball was hit.”

Blame the humidity, a collective Open Championship hangover or simply the vagaries of the game, but once the tournament started, its leaderboard featured an eclectic amalgam of performers ranging from superstars (Nicklaus) to near-superstars (Finsterwald) to international stalwarts (Bruce Crampton) to long-forgotten up-and-comers (Dave Ragan).

On the first day, Nicklaus’ round of 69 was good enough to best any of his touring pro buddies, but left him three strokes behind Dick Hart, a little-known assistant pro from Hinsdale, Ill. In Round 2, Nicklaus struggled to a sun-soaked 73, calling it “the worst scoring in the history of golf.” He remained three strokes behind Crampton after the third round, his prodigious length off the tee recalling long-bombing pros of the modern era.

“Jack was getting tremendous distance,” the Sports Illustrated story stated. “He rarely had to take anything out of his golf bag but his driver, wedge, putter and towel.”

That was hardly the sole account from a half-century ago that sounds significantly similar to current events. At one point during the week, Nicklaus was asked about pace of play and produced an answer that would be talk show fodder for weeks in today’s world.

“I’ve never learned to get comfortable over a putt,” he admitted. “I stand there and stand there and never feel quite right. I can hear somebody in the crowd saying, ‘Why doesn’t he go ahead and hit it?’ I know I’m taking a long time, but I just can’t bring myself to putt fast. I won’t hit a ball until I’m ready.”

Nicklaus blamed his tardiness on the greens – astonishingly enough – to a lack of confidence, even going so far as to suggest an inferiority complex compared with the short games of his stiffest competition.

“They may tell you I am, but I don’t think I’m as good a putter as Arnold [Palmer] or Gary [Player],” Nicklaus said at the time. “They’re fantastic. I’m not all that bad, but I could be a lot better.”

On Sunday, he was. Nicklaus eagled the par-5 opening hole and by the time Sunday’s back nine was in full swing, the tournament had become a three-man race. Crampton lost his lead on the 12th hole, then made a mess of things on 14, essentially eliminating himself from contention.

That left Nicklaus and Ragan. Tied late in the contest, Nicklaus drilled a 30-foot birdie putt on 15 followed minutes later by a fluffed chip and two-putt bogey by Ragan on 17. Those nearly concurrent events led to a two-stroke triumph for Jack.

Ragan won three PGA Tour titles and was a member of that year’s Ryder Cup team, but never did claim a major. If he’s spent the past 50 years enduring fitful nights of sleep while wondering what might have been, though, he doesn’t let on.

Reached at Inverness Country Club in Birmingham, Ala., where he still gives lessons, the 77-year-old is asked about lingering memories from the 1963 PGA Championship.

“Where did we play that one?” he asks, exhuming the notion that such a narrow defeat may have been festering in the inner compartments of his mind for all this time.

When reminded, Ragan recalls with impressive clarity the events which transpired down the stretch.

“I enjoyed every minute of it,” he says. “I really thought I was going to win. On the last hole, I missed a short birdie putt. A few minutes later, [Nicklaus] hooked it into the rough on 18. He decided to lay up, pitched out and then knocked it on the back of the green. It hit and spun immediately back to about 10 feet above the hole.

“I thought, ‘Maybe he’ll be nervous and knock it by and miss the next one.’ Ah, shoot. He drilled that baby right in the heart.”

Even so, Ragan holds no ill will toward the man who prevented him from major championship glory, a man he still refers to as “a good friend.”

“One day I was talking to him,” Ragan recalls. “He says, ‘Hey you remember Dallas? The tournament there?’ And I just said, ‘Oh, vaguely…’”

As for Nicklaus, it may have just been one of 18 – not as important as the first one; not as significant as the last one – but his set would forever feel incomplete without a trophy from that year’s tournament.

“The golf course may suit a lot of guys' games, but that's not what the game is,” he says now in reference to that week. “The game is to change yourself to fit the golf course and that's why you play different courses every week. Obviously I was able to do that that week, as were several other guys that were close.

“I guess I was lucky and prevailed.”