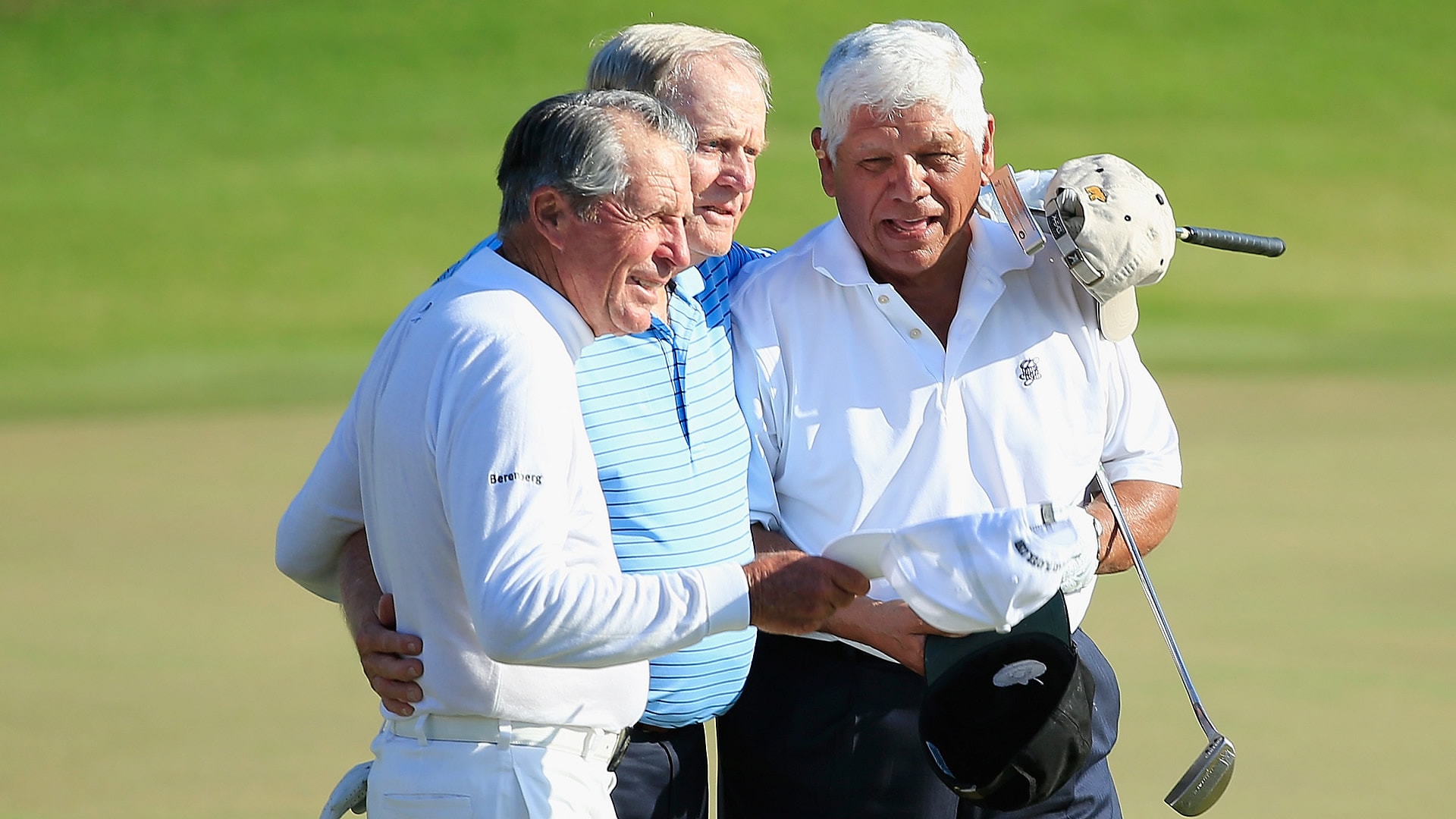 THE WOODLANDS, Texas – There are days filled with words you wish you never heard. And then there are days when you keep quiet and enjoy the sights and sounds of others.

Today was a good day.

“I’ve been a pro for 63 years,” he says, almost triumphantly. “Traveled more miles than any man alive.

“These guys today, talking about being tired from all their travel.”

He fully spreads his arms across the two empty chairs and slides down in his.

“They get their own jet. Million-dollar appearance fees. I’d travel 40 hours, with six children, stop four times in the most unbelievable places …”

You’ve probably heard that before. But, hey, it’s Gary Player. It’s better than listening to the a guy explain why he hit a full 7 instead of a laid-off 6, a nostalgic reprieve to cliché and banality.

Player was one of nine greats who teed off Saturday afternoon at The Woodlands Country Club, a half-hour after the final group set out in Round 2 of the Insperity Invitational.

They were even observed on Saturday by another World Golf Hall of Fame member, former president George H.W. Bush.

Of course, money is involved. These guys aren’t playing the 3M Greats of Golf for free. But it doesn’t matter what the primary incentive is – cash, camaraderie, competition –all that matters is that they have gathered again to entertain.

It's not all for fun. You can tell that these guys still want to win and beat one another, even if it’s an 18-hole, three-man, three-team scramble.

You can see it when Jacklin turns to Graham, flabbergasted that his tee shot on the par-3 eighth came up short of the green.

You can feel it when Irwin doubles over after a birdie miss at No. 9.

The golf was the golf. Team Irwin-Crenshaw-Stockton prevailed. But even they admitted, that didn’t really matter.

It was in the experience, and in the stories.

Prior to the event, two press conferences were held. One with Nicklaus, Player and Trevino. One with Crenshaw, Irwin and Stockton.

In the former, a question was asked relating to how the three players lifted each other’s games. Trevino started talking, telling a story about how in 1979, “you guys, you guys were starting to write about he’s finished, and what did I say? You know, in the wintertime when you go in a cave, you find a sleeping bear, leave the guy alone, don’t wake him up. You guys woke him up! He comes back, wins two majors.”

Then Player chimed in: “Funny enough, I was in his house. … and Sports Illustrated wrote about the end of Jack Nicklaus’ career, and I remember it like yesterday. He took that Sports Illustrated and he threw it down like that on that table.”

The story went on for a while. And then Trevino spoke again. And then Player. And then …

“A little while ago you asked a question,” Jack said with a smirk.

When the next trio sat in the still-warm seats, the clock continued to move without notice. The topics were similar, the responses equally in depth. There was even reverence for the men who spoke before them.

“They’ve given us so much, and they’ve allowed us to do what we do, and there’s an awareness in the golfing world that those three and Arnold Palmer – they have given us this opportunity,” Crenshaw said.

“You see respect written all over the room,” added Irwin.

Eventually, the interviews had to end. There was lunch to be had – with President Bush – and golf to be played.

Word of advice: If you can only spend five minutes at a golf tournament, do so when Lee Trevino is on the first tee. And if Player and Nicklaus are there, all the better.

“First up, and arguably the best player of all time, Jack Nicklaus!” the first-tee announcer said as an introduction. Without missing a beat, Player said incredulously, “Arguably?!?” To which Trevino countered with, “Trump might have won more club championships.”

After Trevino was announced, a guy yelled, “You the man!” Trevino shot back, “A woman never says that.”

The main attraction – their following well out-numbered Daly’s for most of the round – didn’t disappoint. They poked fun at one another, shared quips, and interacted with the fans.

Waiting on the fifth tee box, Nicklaus sat in his cart. A guy started a mostly one-way chat and then brought up ice cream. He now had Jack’s attention. Nicklaus shifted his body toward the fan and began to list every flavor of his eponymous brand.

A 76-year-old man talking about ice cream in earnest. And it was great.

“Sounds like you haven’t got a flavor you don’t like,” someone said. “Can’t you tell,” Nicklaus replied.

As the day faded, Jack, Gary and Lee rolled up to the 18th green. Hale was there, and Ben, and Tom, and Dave and David. Only Tony was missing, because he had to catch a flight.

The greatest of the Greats couldn’t convert their final birdie putt. But no matter.

There must have been 50 people on the 18th green, hundreds more in the roped-off fairway and surrounding stands. Ben hugged David. Hale chatted with Tom. “Nice being with you, pal,” Lee said to Jack amid a mighty bear hug.

And then everyone stopped. Everyone.

Everyone looked up to the Jumbotron to watch the Kentucky Derby. Even the remaining eight legends.

Sometimes it’s good to be silent and enjoy the sights and sounds of others.