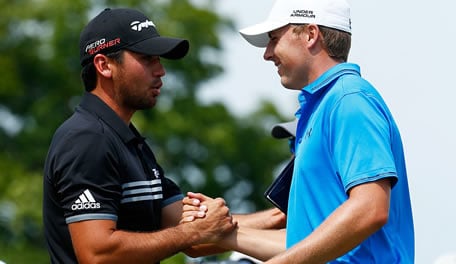 SHEBOYGAN, Wis. – Ellie Spieth wrapped her arms around her brother’s leg and hugged with everything she had.

Jordan shared the squeeze, but when he went to move only his right leg went forward. Ellie stayed affixed to his left hip.

When he didn’t, at least when he didn’t accomplish his primary goal of becoming the third player in history to win three men’s professional majors in a season, the family was there to support him – and embrace him.

Twenty-nine times during his pre-championship news conference last Wednesday, Jordan Spieth used the personal pronoun “we” to refer to his actions.

“We do a good job of dissecting the most important information on courses.”

“We have been improving each year in the major championships.”

“I think we're going to be a lot more mature in that situation.”

And that doesn’t include the number of times he said “our” instead of “my.”

It’s not a psychological ploy, designed to lessen his burden. Spieth craves pressure, functions better the greater the amplitude.

It’s not an overt sign of respect, meant to project a faux All-American appeal.

At least, that’s not what this seems; though, the skeptic might contend otherwise.

This, whatever this is to Spieth and however other may perceive it, isn’t about anyone else.

It’s about winning major championships; an encompassing, need-to-know plan, designed to maximize his ability and allow him to contend and win golf’s biggest events on a regular basis.

All of these individuals and organizations converge for a common goal: make Jordan Spieth the best player he can be.

It might sound a little saccharine, but the results are undeniable.

At 22, Spieth is a two-time major champion, a five-time PGA Tour winner and the second-youngest world No. 1 in men’s history.

Again, at 22 years and three weeks.

He’s gone from a talented prospect with no professional status to one who earned a Tour card on merit to someone who has earned $18.6 million in three official seasons.

And when asked to assess his accomplishments, Spieth credits those around him for helping make him successful. He does, however, understand that he plays a significant role in all this.

It’s a selfish endeavor, really. Having all the people around you, focused on you and what you need/want to do. But it’s mutually beneficial. The components of “we” are well compensated, whether that is financially or emotionally. This, as it appears on a personal, if not completely on a corporate level, is done more out of respect and love than for financial gain. This is with whom Spieth has chosen to share himself.

This is his team.

“I figure I have, Michael's with me on the course, he's the one that's a part of each decision that we make as far as preparing for what we do. I have Cameron, I have my trainer Damon, sports chiro, manager, everybody gets stuff ready for us to play our best golf,” Spieth said.

“I'm the one hitting the shots and hitting the putts and getting the credit, I guess, but at the same time I believe that this is a – we're a brand, we're a company, we're competing together all for the same goal. And I try to align myself with the best at what they do in the world, because then that will free me up, I won't have to worry about any other parts of my life on and off the course and it seems to be working. We got a great team and no one's been scared of the next level and that's why we are where we are right now. So, I believe that on and off the course it's not just me.”

Players once had themselves as the entirety of their team, maybe an immediate family and a regular caddie. Then maybe the addition of a swing coach. Maybe an assistant. Then a manager. Possibly a trainer. A sports psychologist. Nanny. Personal decorator.

It takes a village, nowadays.

Some surround themselves with many others out of luxury. The goal isn’t to make themselves a better, more singularly focused player; it’s to make life comfortable and enjoyable.

Others, like Spieth, create a team for professional purposes, so that he can limit distractions, put on blinders and do that which he most wants to do: Win.

Spieth is certainly not alone in this endeavor; he has just been the most successful recently in applying the plan.

A further study of his PGA Championship transcripts reveal Spieth’s mentality. On Wednesday – carrying a treasure trove of positive memories into the media center and with the prospect of winning three majors in one season – Spieth took the all-inclusive pronoun route. Success was shared.

Sunday, upon defeat, responsibility was singular.

“I knew I was going to be playing uphill from there.”

Again, interpret and judge how you will, but this does not appear to be media deception. If Spieth is a microphone con man, he’s better than Frank Abagnale, Jr.

Spieth’s public persona has been both praised and criticized; though, mostly praised. But the manner in which he speaks to the media, the way in which he answers questions – as famed golf writer Jamie Diaz was quoted recently, “It’s almost like you’re the teacher and he wants to get an A on the answer.” – is more than just how he was raised or perfunctory Texan talk.

It’s part of a mindset that has been conditioned to win. And, in his mind, winning takes a team effort. Losing, well, that’s on him. That’s him not properly applying his winning formula, one he chooses not to reveal.

It didn’t work this past week. Not so much because of what Spieth did not do, but because of what Jason Day did. Spieth understood this and it’s why – along with claiming world No. 1 for the first time in his career – that he was in a congenial mood Sunday evening.

“Obviously, this is as easy a loss as I've ever had,” Spieth said, “because I felt that I not only couldn't do much about it, as the round went on, I also accomplished one of my life-long goals and in the sport of golf.”

Day was brilliant, setting a major record in relation to winning score under par. But even he, in his post-victory news conference, credited his team for putting him in position to be successful.

Family, a few employees, limited outside influence. Zach Johnson, the reigning Open champion – and unlike Day and Spieth, pushing 40 – spoke last Tuesday to the positive influence of those around him. Verbal mentions of “we” and “team.”

That’s the golf world in which we live. This is a team game now. And great players surrounded by good people are very successful.

“My team,” Day said, “we’re very close. And I don’t have a bunch of ‘yes’ men around. I’ve got people that are very honest and care about not only my golf game, but who I am as a person.

“I’m going to think about (winning the PGA) for the rest of my life and I know … that we did it together.”

Before his victory, came the tears. Day fought to suppress his burgeoning emotions, at least until after he putted out to win his first major title.

When that happened: Niagara Falls.

“When I saw that putt go up to half a foot, I just couldn’t stop crying,” Day said. “It’s just a lot of hard work that I’ve been putting into this game to dedicate myself to have a shot at glory, have a shot at greatness. And that’s what we all work towards.”

Just as Spieth was joined by members of his team upon defeat, so, too, was Day in triumph. His wife Ellie; son Dash; caddie/coach/father figure Colin Swatton; agent Bud Martin and physiotherapist Cornel Driessen, were there.

As he walked to the scoring trailer, Day carried his son in his arms, holding him tightly while walking through the security-made path, aligned by patrons and press.

And just like Ellie Spieth a few moments before, Dash Day didn’t want to let go. He clung to his hero with all that he had.

But Daddy had to go sign his card. He has just won a big one for the team.