Trip Dispatch: Stepping back in time at the Renaissance Vinoy Resort & Golf Club in St. Pete 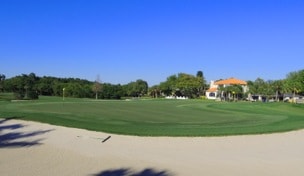 ST. PETERSBURG, Fla. -- Just a week earlier, Babe Ruth's daughter, Julia Ruth Stevens, was here, regaling tales of how she would attend dances for young people in the now magnificently restored ballroom at the Renaissance Vinoy Resort & Golf Club. She's 98 years old, still sharp as a tack, according to our historical guide, and a living link to the Golden Age in these parts. Some of the golf courses in the immediate area also share those same traits. The Renaissance Vinoy Golf Club, now private but open to resort guests, can trace its history back to the turn of the previous century, and while it was moved from its original 9-hole location closer to the water (originally designed by Donald Ross), the current Ron Garl redesigned version has come through like a champ.

The same can be said for another classic course, Belview Biltmore Golf Club, less than 10 miles away from the Renaissance Vinoy. Opened in 1925, this Ross gem was known as Pelican Golf Club for most of its existence, but has undergone several ownership changes in the past few years. Last year, it was rescued by the city of Belleair, which has kept the green fees very affordable (less than $50) with maintenance standards well above the price. It's actually located next to 36 holes of more Ross-designed golf at private Belleair Country Club, and if you get the chance to play over there, take it. Those two courses are always in tip top shape and are two of the better courses in the state.

Back at Belleview Biltmore, though, there's no mistaking those Ross greens, but they're not the same old greens. A few years ago, the course was restored to the original Ross specs as a 6,614-yard par 71,and as part of the renovation it got new Tif-Eagle greens, which are in excellent shape and as difficult to putt as always. The course might be little short by today's standards, but the layout is interesting with a variety of holes. Add in those greens and scoring is a challenge.

Vinoy and Biltmore were just two of the courses I checked out as part of a quick, five-course tour while I was in St. Pete. My journey also included Mangrove Bay, one of the busiest and golf-centric munis in the country. Mangrove Bay is St. Pete's only championship municipal layout, but it's solid. At almost 6,800 yards, the course is laid out through 180 acres Florida mangroves, just a few hundred yards from the bay. With water on half the holes and plenty of sand, it will challenge good players and high handicappers alike. It's also in better shape than your typical muni, but the real bonus is the practice facilities and two par 3 courses that are also part of the St. Pete municipal system. Next door is a nifty par 3 course called Cypress Links, which is maintained as well as most daily fees. Best of all, it's perfect for beginners or even advanced players who want to work on their approaches and short game. And a few miles away, the city has another par 3, Twin Creeks, which is actually 18 holes.

And finally, I also went to nearby Largo and checked out checked out Bardmoor Golf & Tennis Club, which once hosted the PGA/LPGA JC Penney Classic. This paspalum course (Tif Eagle greens), opened in 1990 and was renovated by Gary Koch in 2003. It's 7,000 yards from the tips and has plenty of water, so it can certainly be a formidable test for most players.

I had been through St. Pete before, but only on my way to Bradenton or Sarasota, where there's plenty of golf and tennis. St. Pete, in case you’re not familiar, is across Tampa Bay to the west of Tampa. Just north is Clearwater and between the two you'll find unspoiled beaches devoid of most of the spring break traffic, chalked full of great restaurants and a few historic hotels.

One of the best is the Renaissance Vinoy, now operated by Marriott. Opened New Year's Eve 1925 and named after developer Aymer Vinoy Laughler, the grand hotel, originally named Vinoy Park, has been through a lot. In its early years, during Ms. Ruth's time when her famous father spent winters playing golf in the area and training for the New York Yankees upcoming seasons, it was place to be. There were balls and weddings and luxurious dinners and accommodations. The architecture was, and still is, Mediterranean Revival with an elegant, sophisticated décor.

During World War II, the U.S. Army set up camp there, and after a couple of ownership changes, this magnificent resort closed for nearly 20 years until it was restored meticulously in the early '90s.

The waterfront Renaissance Vinoy in St. Petersburg dates back nearly a century.

Today, the resort, which presides majestically over St. Pete's pristine waterfront offers the modern amenities that seasoned travelers and vacationers expect out of a first-class resort. From well-appointed rooms with views of the ocean, tennis complex or the city to one of the best and liveliest pool decks you'll find anywhere, the Vinoy is a pampered step back in time. My time here was not only spent playing golf, but enjoying fine dining, a tennis lesson, a sailboat excursion into the bay (where we anchored for a quick swim) and exploring the waterfront and downtown attractions.

Those attractions include the The Chihuly Collection and the Dali Museum. To see Dale Chihuly's spectacular collection of glass sculpture is believing. The hurricane-proof Dali Museum not only included an impressive display of Salvador Dali's incredible paintings and drawings but a special Andy Warhol exhibit as well. After the Dali, we strolled through the Saturday farmer's market next to where the Detroit Tigers play their Grapefruit League spring training games.

And there was dining, of course, lots of it, in town and at the hotel. The hotel features several restaurants, including Fred's Steakhouse, which serves some of finest cuts in South Florida. The most memorable, however, was saved for the last, the Sunday brunch at Marchand's a restaurant/bar that not only offers delectable meals with wine and beer pairings, but live entertainment and dancing. Sunday, though, brought items you don't see in a typical brunch. Lobster omelets, crab cakes and your own custom Bloody Marys – and that was only the beginning. No need for lunch or dinner after that.