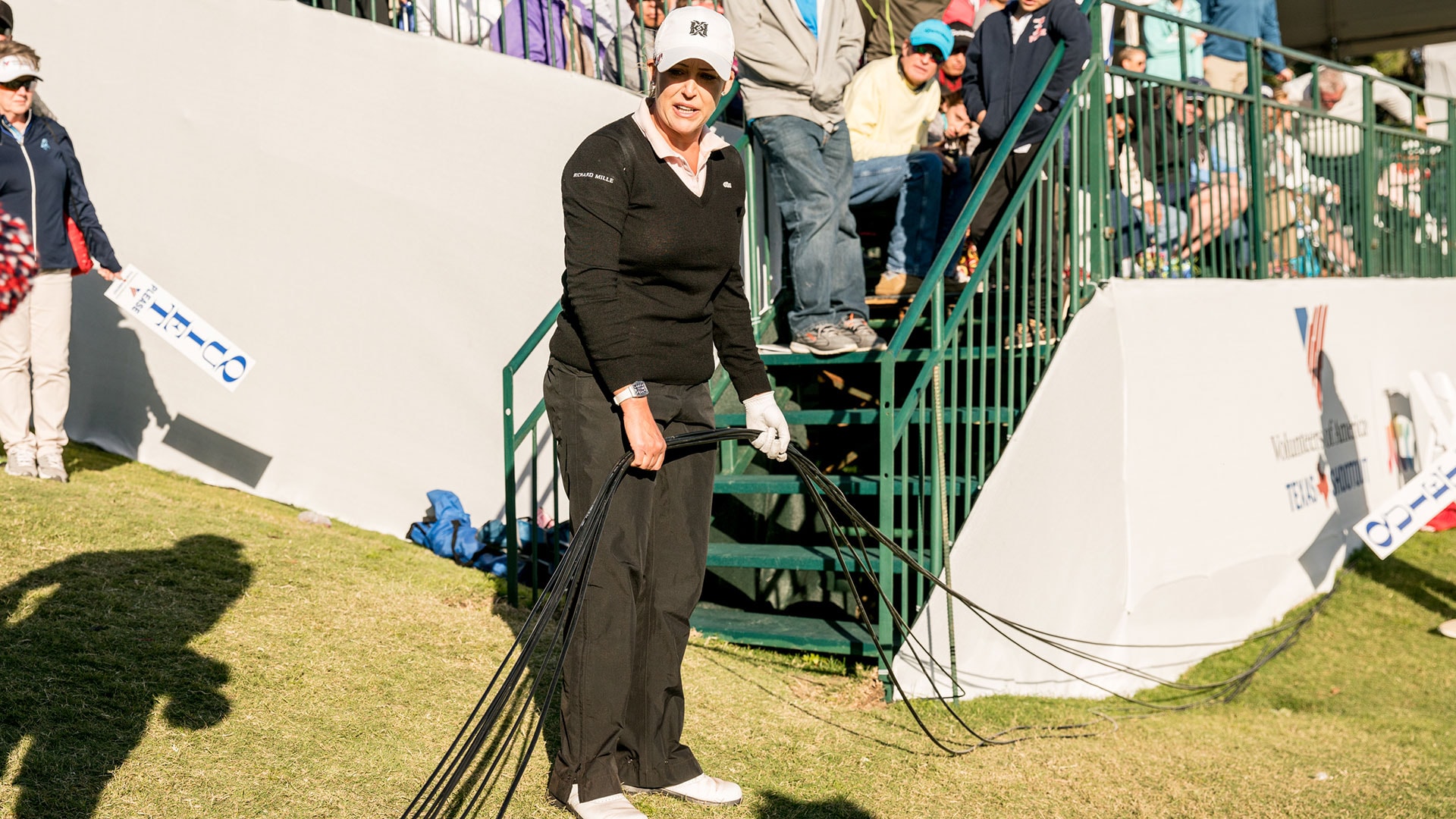 Revving the engine in bumper-to-bumper traffic on the way back to work Monday.

The LPGA had a chance to win over some new fans with an expanded audience tuning in to Golf Channel to see the Volunteers of America Texas Shootout go to extra holes, but the playoff didn’t pay off that way.

With Golf Channel splitting coverage between the LPGA playoff and the Zurich Classic’s re-start after a weather delay, a larger PGA Tour audience got a chance to see Haru Nomura take on Cristie Kerr.

If you were reading social media, it was a blown opportunity.

Nomura won the playoff with a brilliant second shot on the sixth extra hole, and Kerr was brilliant herself in overcoming a five-shot deficit in blustery, tough conditions on the back nine to force the playoff, but that’s not what most golf fans on social media were talking about. All they seemed to be talking about was the aggravating, snail pace of the playoff and the monotony of seeing the same questionably designed hole being played over and over again.

Even Golf Channel’s Judy Rankin weighed in on the pace-of-lay issue:

“I have great respect for Cristie Kerr, but she is really taking a long time. It almost feels like she is slow playing (Nomura). Cristie doesn’t take this long all the time, and I’m not sure it’s helping her ...

“I’m not trying to say anything harsh about Cristie, because I think a lot about her professionalism, but she is almost slow playing herself.”

The winds and the nature of the 18th hole’s design didn’t help Kerr, with the hard slope of the fairway funneling good drives down into the same spot in the tree line on the right, requiring extra thought for second shots. Even layups from there ended up in challenging positions.

It also didn’t help Kerr and Nomura that lessons the tour learned at Kingsmill five years ago weren’t applied, with the 18th hole at the Texas Shootout used exclusively for the playoff. Jiyai Shin took on Paula Creamer at Kingsmill in a monotonous “overtime” there with the 18th hole being played nine times before Shin ultimately prevailed.

Kerr nearly became the first American to win back-to-back events since Stacy Lewis did it three years ago. Nomura won for the third time in 14 months, but, unfortunately, too much fan focus was elsewhere.

The PGA Tour decides to take its toughest stand against slow play in 22 years, and it decides to do so during the staging of its first two-man team event in 36 years?

The tour hit the team of Brian Campbell and Miguel Angel Carballo with a one-shot penalty for slow play in the first round of the Zurich Classic, during foursomes play. They did so with Campbell and Carballo playing with a couple PGA Section pros who were struggling.

First, the PGA Tour ought to be hit with a slow play penalty for waiting 22 years to follow up on the penalty it gave Glen Day. The Tour also ought to get hit with a violation of Rule 20-7c, playing from the wrong spot, because it was the wrong place and wrong time to take any meaningful stand. It makes it feel like maybe tour rules are applied according to your rank in tour life.

The PGA Tour’s team event at the Zurich Classic worked so well, we want more.

The team dynamic worked great for TV, with the added emotion and energy radiating through the screen to living rooms. It seemed like there were more high fives, fist bumps and extra fist pumps in play. All the extra fun these teams were having made for more viewing fun.

Personally, I love Alan Shipnuck of Sports Illustrated’s idea, a team Skins Game, with a combination of players putting in their own money and the PGA Tour matching it. Now that would be a blast to watch.

LPGA Hall of Famer Karrie Webb would have liked an even stronger reaction from the USGA and R&A last week than just their “naked eye” and “reasonable judgment” renderings after the ANA Inspiration debacle, but she loved the idea that more is coming and that maybe even more “fast tracking” of rule decisions is coming.

“Obviously, in the past, something like Lexi Thompson’s incident wouldn’t have taken three weeks to make rule changes,” Webb said. “It would have taken years. There’s progress being made there, and the fact that they’ve formed a committee ... hopefully, some good things will come out of that.”

Amen to all of that!