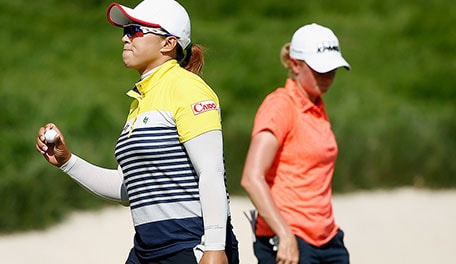 LANCASTER, Pa. – As busy as he was Saturday in the middle of a moving stage they call the U.S. Women’s Open, Travis Wilson enjoyed the show.

While Stacy Lewis and Amy Yang didn’t make a lot of birdie putts storming their way around Lancaster Country Club, they took turns hurling golf shots like thunderbolts at flagsticks to the delight of the giant galleries jockeying for position to see. They put on a ball-striking exhibition.

“Listening to the way it was out there, the back and forth, two great golfers going at it,” Wilson said. “There was no letup in either one.”

With Yang and Lewis paired together again in the final round, this might already be a two-woman event.

If history’s any indicator, nobody else has a chance on Sunday. In the 69-year history of the U.S. Women’s Open, nobody has come from six shots or more behind in the final round to win. Lewis almost did it last year, charging from six back with a 66 at Pinehurst, but she ultimately finished second to Michelle Wie by two shots.

“I think it’s is playing even harder than Pinehurst was last year,” Lewis said. “It's a little bit comparable to the Kraft Nabisco in 2011, when I was playing with Yani Tseng, where the two of us kind of separated ourselves from the field. It kind of became a two-man show there at the end. It's similar to that.”

Lewis came from two behind Tseng at Kraft to win the first of her two major championships.

“I think I've always played better coming from behind,” Lewis said. “So I like where I am going into tomorrow.”

Yang and Lewis are both looking to script better finishes than they endured last year Pinehurst. They were both within reach of the Harton S. Semple Trophy on Sunday, only to see Wie hoisting it in the end.

Yang, 25, was tied with Wie for the lead going into the final round but shot 74. Yang, who has won seven times around the world, twice in LPGA events, keeps showing she has a game built for the U.S. Women’s Open. She just hasn’t been able to win one. She has finished among the top 10 in four of the last five U.S. Women’s Open. This marks the third time Yang has played in a final Sunday pairing in one. She was with Na Yeon Choi in 2012 when Choi won at Blackwolf Run. Yang believes those experiences will prove valuable Sunday.

“It was good experience, the last two,” Yang said. “I’ll go out there and just do my best.”

Yang and Lewis got off to a dizzying start, taking turns on different ends of two-shot swings over the first two holes. Yang opened with a birdie, Lewis with a bogey. Lewis followed with a birdie at the second hole and Yang bogeyed.

There was another two-shot swing at the 14th with Lewis going from four shots back to within two.

All the while, nobody else back in the pack made a move at them.

“I was watching the leaderboards today, waiting for someone to jump up there,” Lewis said. “It just never happened.”

Lewis, 30, ranks second for the week hitting greens in regulation (44/54). Only Chun has hit more. Yang is right behind Lewis, having hit one less green in regulation.

“I felt like I hit some great shots that put a lot of pressure on her,” Lewis said. “And then she just would respond and hit it right in there with me.

“There were multiple times today that it was iffy who was away. We were hitting shots on top of each other. In a sense, it's frustrating, because you're trying to get closer but you really can't get any closer. But it's also what you want to see. I think it's great golf.”

“We started poorly last year, 4 over after four holes, but one of the things I really like about Amy is her attitude,” Poitevent said. “She has a great attitude. She doesn’t get frustrated. She bounces back. She can handle adversity.”

As good as Lewis has been the last year, she has endured her own share of adversity in a year of almosts. She hasn’t won in more than a year, but she has battled into Sunday contention countless times, recording six second-place finishes and two thirds since her last victory. She lost the year’s first major in a playoff with Brittany Lincicome at the ANA Inspiration.

Lewis feels good about her swing, and so does Yang. It bodes well for another shot-making show.

“I expect more of it tomorrow,” Lewis said.