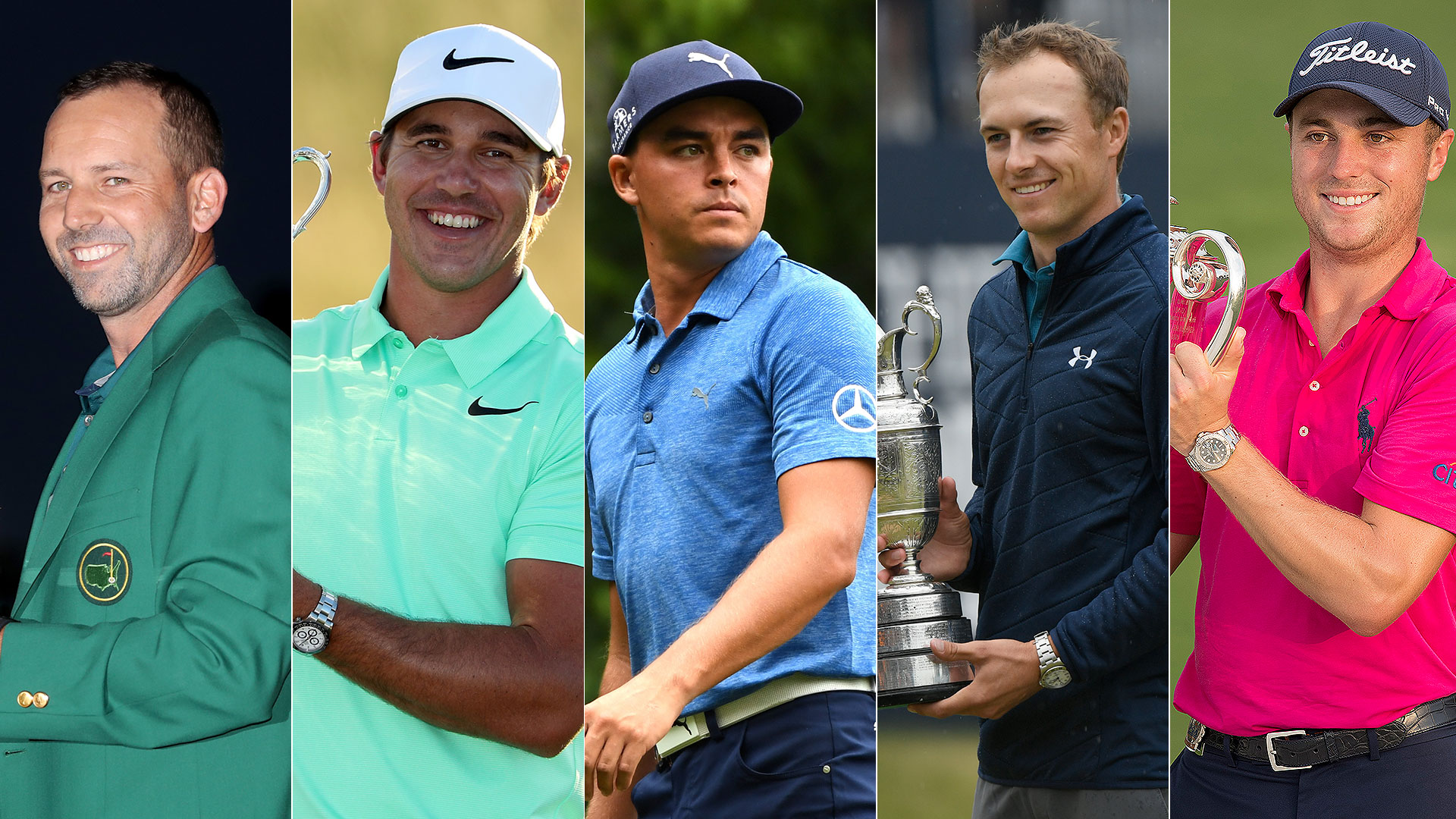 If it seems like just yesterday you were heading down Magnolia Lane for the year’s first major, welcome to the club.

With Justin Thomas’ Sunday charge at Quail Hollow, the Grand Slam season came to a dramatic close, four months after Sergio Garcia got things underway at the Masters. For those who say professional golf has no offseason, consider that the next major golf shot won’t be hit for 231 days. How’s that for dramatic pause?

There were a few themes to this year’s major championships, with three of the four being won by first-time major winners and two stops defined by ridiculously low scoring.

Charley Hoffman got the season underway on Thursday at Augusta National, his 65 the best round of the day by four strokes and nearly 10 shots better than the Day 1 field average (74.97).

Rickie Fowler did what Rickie Fowler does at majors, moving into a share of the lead through 54 holes only to fade on Sunday (we’ll circle back around to Fowler in a moment), and Garcia doing what few that he could – win a major.

Perhaps Sunday’s final round at the Masters wasn’t exactly what we’ve come to expect from the year’s first major, with Garcia and Justin Rose battling to a standoff with closing nines of 35, but it was entertaining nonetheless and the Englishman gave one of the game’s classiest interviews in defeat.

“It was a wonderful battle with Sergio, you can’t feel bad for me. If there was anyone to lose to it was Sergio. He deserves it,” Rose said.

But what the Masters may have lacked in Sunday firepower, the U.S. Open filled the void.

One of two first-time major venues this season, conventional wisdom suggested Erin Hills, a behemoth at 7,740 yards, would be a typical U.S. Open grind. That unease was only fueled when officials made an 11th-hour decision to mow down some of the layout’s rough before play started.

What transpired on the course, however, was something entirely different.

Fowler (remember him?) once again got off to a dream start with a first-round 65, one of 44 scores under par at the Bob Hope Classic U.S. Open on Day 1. On Saturday, Thomas set a championship record in relation to par with his 9-under 63 and Johnny Miller, whose 8-under 63 in ’73 had been the U.S. Open scoring standard, wasn’t exactly impressed.

“Taking nothing away from 9 under par – 9 under is incredible with U.S. Open pressure,” Miller told GolfChannel.com. “But it isn’t a U.S. Open course that I’m familiar with the way it was set up . . . It looks like a PGA Tour event course set up.”

That Brooks Koepka would finish at a record-tying 16 under for his first major victory did nothing to counter Miller’s argument - that the combination of no wind and a soft course had turned Erin Hills into a major pushover - but Thomas would have the final word before the Grand Slam season was over.

Perhaps there was some solace for the USGA that the scoring assault continued at Royal Birkdale in July when Branden Grace made more history, becoming the first player to shoot 62 in a major on Saturday, not that the South African knew of his accomplishment until he’d putted out.

“Let's get this out of the way: I didn't know what was going on on 18. I promise you,” Grace smiled. “[Caddie Zack Rasego] came up and said, ‘You're in the history books.’ And I was like, ‘What are you talking about?’”

But if ignorance was bliss for Grace on Saturday, Jordan Spieth knew exactly what was going on during the final round when his tee shot at the 13th hole sailed into a dune right of the fairway.

More than 20 minutes later, after taking an unplayable lie and a drop on Birkdale’s practice tee, Spieth completed a scrambling bogey that the late Seve Ballesteros would have been proud of.

Spieth later admitted that he’d hit drives much farther off line in his career, but none were as eventful on his way to the third leg of the career Grand Slam.

“We are going to skip the first 12 holes, right?” joked Spieth when asked about his round, which included three birdies and an eagle following his adventure on No. 13.

In a twist to the Grand Slam status quo, the PGA Championship proved to be the year’s toughest major, with the year’s lowest winning total (8 under) and the season’s toughest course on the PGA Tour by more than a half stroke.

That it was Thomas, who emerged from a crowded leaderboard late on Sunday afternoon, holding the Wanamaker Trophy only seemed apropos (perhaps there should have been some sort of tweet directed at Miller, maybe next time).

It should also be noted that Fowler finished tied for fifth at the PGA despite a Saturday 73, and with 231 days until the next major, the title of "best player without one" rests squarely on his shoulders.