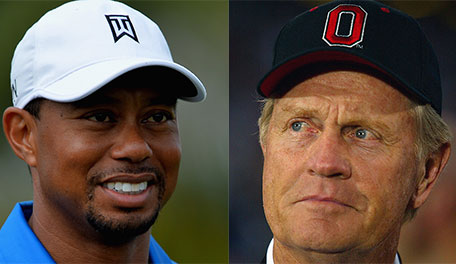 KAPALUA, Hawaii - It's a new year, which offers a lot of new and intriguing storylines. We've got some old topics to tackle as well in this opening edition of Hooks & Cuts:

• For Tiger Woods, it’s not as simple as, healthy back equals healthy game. He has to be healthy psychologically to win big again. Tiger was always better cloaked in invincibility than he has been in vulnerability.

• An Ohio State victory over Oregon might be the biggest Buckeye win since Jack Nicklaus at the Masters in ’86. The greatest Buckeye triumph of all time remains Jesse Owens’ four gold-medal rebuke of Aryan supremacy at the 1936 Berlin Olympic Games.

• Yippy and lifty, I’d been missing 3-footers all day. After another shove right at 17 I turned to my caddie and said, “This is sad.” He replied, “No, no, it’s not sad.” Empathetic, I thought. Then he added, “It’s pathetic.”

• A stab at the next three U.S. Ryder Cup captains: Steve Stricker, Mickelson and Jim Furyk.

• Rookies to watch in 2015: Tony Finau and Daniel Berger. Finau’s built like an NFL tight end and hits it miles. He’s gracious and he smiles. The son of former tennis pro Jay Berger, Daniel’s intense, long enough, and highly competitive.

• Curious to see how they fare in '15: Brooks Koepka, Patrick Reed, Dustin Johnson and Michelle Wie.

• The Masters is a feeling as much as it is a competition. No one understands that better than two-time winner Ben Crenshaw, who bids farewell to Augusta this April. Pass the tissues.

• Struck by the beautiful vista from an elevated tee during a recent round, I stood transfixed in a moment of reflection, thinking, “This is golf.” I turned around and saw my buddy smoking a cigarette as he relieved himself in a bush and I thought, “No, THIS is golf.”

• When does Mickelson get his own tournament?

• I would not be surprised if Jason Day, Adam Scott, Garcia and Spieth won majors this year, or if Rory McIlroy won the career slam at the Masters. I would be pleasantly surprised if Larry Nelson were named Ryder Cup captain and if Tiger played an entire season injury free and won his 15th major.

• People do still read newspapers. At least I wish they did. On a recent flight the guy next to me kept loudly folding and shaking his newspaper as I was trying to sleep. Every 15 seconds, he crinkled and crunched it. I was dying to say, “Settle on something, anything. Page 12: Australian Panda gives birth to triplets. It’s a terrific story.”

• We in the media too often focus on big names because it’s easy and it sells. Actually, rank-and-file tends to rule week-to-week on Tour. Rank-and-file works at it. Rank-and-file shoots 65. In 2014, Jimmy Walker, Reed, Kevin Stadler, Scott Stallings, Russell Henley, John Senden, Matt Every, Steven Bowditch and Matt Jones all won before the Masters.

• Eighteen majors is still the singular record in golf, the most coveted and most talked about. But Sam Snead’s mark of 82 Tour wins isn’t far behind and I hope as Tiger, now with 79, inches closer that feat grows in magnitude. Let it marinate in your mind, the phrase, winningest golfer of all time. That also underscores the idea that Kathy Whitworth, with 88 career victories on the ladies' side, is underappreciated.

• Former USGA president and NCAA champion Sandy Tatum is now 94. He told me maybe the greatest single sports story I’ve ever heard and it involves Jesse Owens (pictured above). At 16, Tatum traveled alone from America to Europe to visit his sister, in 1936. Tatum went to the Summer Olympic Games in Berlin. “Chilling,” is how he describes the feeling as a stadium full of Germans stood to give the Nazi salute to Adolf Hitler when he arrived each day. With a German, ironically named Luz Long, on the cusp of winning the long jump, Owens had one last chance to puncture Nazi propaganda that boasted of racial superiority. A smile comes across Tatum’s face as he readies for the story’s crescendo, the picture as clear and beautiful today as it was almost 80 years ago. “Owens took off on that final jump,” Tatum recounts. “And he never came down.”

• Masters wins that would move the needle most: Tiger, Rory, Rickie, Phil and Jordan, in that order. Hideki Matsuyama winning, and that’s not a remote possibility, would move it in Asia.

• Anirban Lahiri of India and Antonio Lascuna of the Phillipenes are currently qualified for golf’s return to the Olympics next summer in Rio. Tiger and Phil are not.

• Tom Watson will likely play his 40th and final Open Championship this summer at the Old Course at St. Andrews. It’s just a few steps over the Swilcan Bridge, but miles and miles from Gleneagles, by then a long nine months shaking off the stench of the Ryder Cup to again bask in glory.

• Carlos Ortiz, the 2014 Web.com Tour Player of the Year with three victories, has a chance to become the first Mexican-born winner on Tour since Victor Regalado won the Ed McMahon-Jaycees Quad Cities Open in 1978. By the way, Quad Cities, now the John Deere Classic, is one of the most underrated tournaments, producing some good moments through the years. Payne Stewart always said that it was his most cherished win, in 1982, because it was his first on Tour and the only one his father, Bill, got to see before he died of cancer in 1985. The Grip, Eddie Fiori, took down Tiger there in 1996. And Spieth winning there in 2013 at age 19, the youngest in some 80 years on Tour, may someday turn out to be significant.

• Billy Horschel’s proud of his Fed Ex Cup title, but prouder of his mom, Kathy, who recently earned a college degree.

Woods unaware of Kobe's death until after round

On the second hole of Tiger Woods' final round at Torrey Pines, something unbelievable happened.