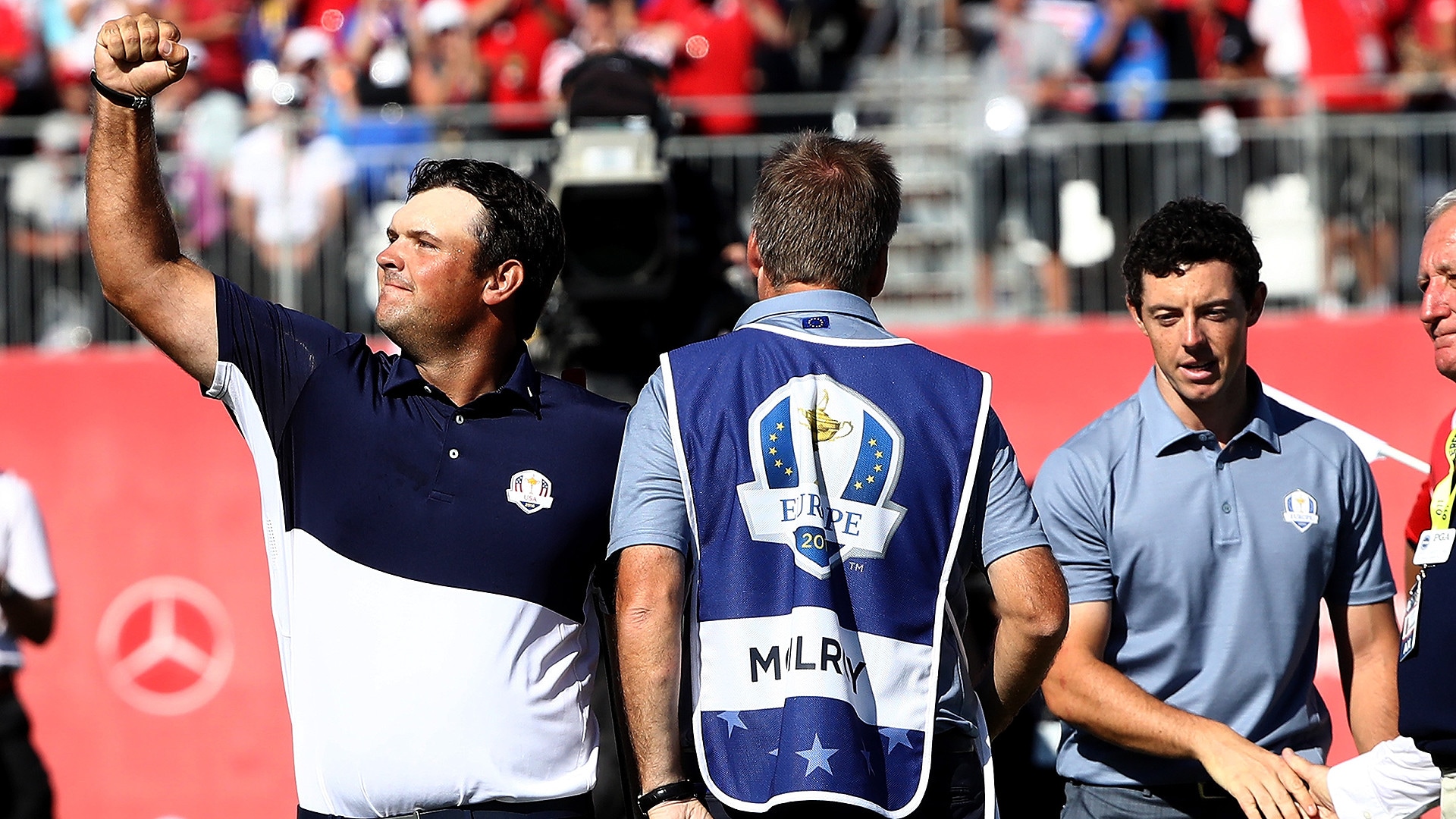 Kevin Na ends his drought, Tiger Woods and Phil Mickelson team up, some other matches we'd love to see, Russell Knox drains bombs, a new LPGA scoring queen is crowned and more in this week’s edition of Monday Scramble:

For those of us not in the arena, we tend to take winning for granted.

Multiple-win seasons by Dustin Johnson and Justin Thomas and Jordan Spieth? They're seemingly no big deal, because that’s what supreme talents are supposed to do. Until last week, Patton Kizzire had more wins this season – two – than Kevin Na could manage in 369 career starts.

But Na’s emotional reaction at The Greenbrier was a reminder that for the Tour’s rank and file, winning is something to be cherished. That it’s not as easy as the stars make it look.

So many pieces need to fall into place for it to happen – great ball-striking, clutch putting, sound mind, good breaks – and when it does, it’s a testament to their perseverance and validation for all of the time and energy spent.

The common denominator among all those close calls?

“It seems like I’ve always tried too hard,” he said.

2. But it seemed easy on Sunday. On a day when so many others were trying to break through for the first time, Na played like the 34-year-old veteran that he is.

He birdied six of the first 10 holes to begin his round, rolling in more than 120 feet worth of putts, and cruised to a five-shot victory that never was in doubt.

3. The Greenbrier is one of the weirdest tournaments on Tour.

Each of the eight winners of the event have trailed entering the final round. Something else: The eventual winner has never led after ANY round. Kevin Na went 63-65-64 over the last three rounds.

Some thoughts, in no particular order:

5. And so continues Phil’s Curious Year.

Mickelson had another interesting rules issue at The Greenbrier. In the final round, he tapped down some long fescue in front of the seventh tee box – apparently, he was working on a few low, stinger shots off the tee for the next two weeks on links course. He said afterward that it was one of “a few boneheaded moves today.”

“I wasn’t really having my best day, focus-wise,” he said.

But it’s time for Mickelson to buckle down for the major that, for now, best suits his game.

6. Russell Knox was passed over for the 2016 European Ryder Cup team. He’s once again in contention for another spot after he capped a torrid run of play with a thrilling playoff victory at the Irish Open.

Needing birdie on the last in regulation, Knox canned a 40-footer and let loose a wild celebration. In the playoff with Ryan Fox, Knox knocked his approach from an awkward lie into a similar spot on the green, then jarred another 40-footer for the win – his first since the 2016 Travelers.

One of the straightest drivers on the planet, Knox tied for 12th at the U.S. Open and then shared runner-up honors at the French Open – interesting, of course, since the event was played at Le Golf National, future home to the Ryder Cup. And now a win, which moved him to No. 8 on the European Ryder Cup points list.

Knox said that he had a “long way” to go in terms of qualifying for the Ryder Cup team, or even being deserving of a pick, but T2-1 in a pair of Rolex Series events is a good start.

Already playing on a special temporary membership, the 19-year-old fired a bogey-free 64 to tie for fifth and earn the necessary points to wrap up his PGA Tour card for next season.

Among the many reasons this kid is special: He saves his best for last. He hit 16 greens in the final round en route to his sizzling Sunday score. In six Tour starts, he’s carded a 67 or lower in five of them.

8. Well, this is concerning: 2016 Open champion Henrik Stenson announced Monday that he was withdrawing from the Scottish Open because of an elbow injury. He hadn’t played since he tied for sixth at the U.S. Open, and he said that he is “hoping to be fit” for next week’s Open.

Here’s hoping he can recover and get his game in shape for the year’s third major. His iron play alone would make him one of the favorites at Carnoustie.

9. Sei Young Kim is the new scoring queen on the LPGA.

She capped off a crazy-low week of scoring at the Thornberry Classic with a final-round 65 to post 31-under 257.

The records that Kim set in the process:

Golf’s governing bodies continued to single out Bryson DeChambeau, ruling that his drawing compass – which he said he uses to find the “true” hole locations on the Tour-issued sheets – was a violation of Rule 14-3a, because it’s considered an “unusual piece of equipment that might assist him in making a stroke or in his play.”

So you can’t use a protractor, but the detailed greens books – which take much of the skill out of reading greens – are OK? Seriously, look at these things!

Just read another article on USGA compass ruling. This sentence jumped out: “In the end, Bodenhamer said, it was determined that the compass had the potential to "compromise a player's skill and judgement." Hmm, how did these green charts ever get approved for use then? pic.twitter.com/Dw0EgPcbDT

Good At the Game: Jon Rahm. In 50 starts as a pro, Rahm notched his 20th (!!!) top-5 finish, this time at the Irish Open. Dude’s a monster, and he should be one of the favorites at Carnoustie.

Much-Needed Result: Brandt Snedeker. Entering last week at No. 115 in the FedExCup standings, he jumped all the way to 84th with a share of third place at The Greenbrier, which was also enough to earn him a spot in The Open. It’s been an uncharacteristically poor season for Sneds, but at least now he has a pair of top-6s in his past four starts.

Well, That Was Costly: Sam Saunders. Using his grandfather’s old 2-Ball putter, he bogeyed two of his last three holes, not just squandering some serious cash (and FedExCup points) but also a spot in The Open.

Opting for Rest: Tommy Fleetwood. He pulled out of this week’s Scottish Open so he can rest and prepare for The Open. Ever since his closing 63 at the U.S. Open, he’s played like a man in need of a break, tying for 59th at the BMW International Open and then missing the cut in France.

Game of Inches: John Peterson. Needing 55.33 points to earn conditional status for the rest of the Tour season, Peterson instead got 54.75 with his eight-way tie for 13th. He’d likely earned enough to play the Web.com Tour Finals in the fall, but the 2011 NCAA champion already said that he’s planning to retire and transition into real estate.

More American Domination: U.S. Palmer Cup team. Jim Furyk and Co. can only hope this is a preview of another team event in France later this year. The Americans routed the Internationals, 38 ½ to 21 ½, at the Evian Resort to win the Palmer Cup.

Better at Celebrating Than Tossing Apples: Russell Knox. This is so embarrassing it hurts to include it here.

Russell Knox (top-left of screen) just tried to throw an apple core … and it wound up behind him: pic.twitter.com/ihBWo0nJuN

Blown Fantasy Pick of the Week: Jimmy Walker. Normally a horse for course at Old White TPC, with three top-4s in his career there, he shot one of the worst scores in the opening round (5 over) and easily missed the cut. Sigh.