Monday Scramble: Do it on the Daly 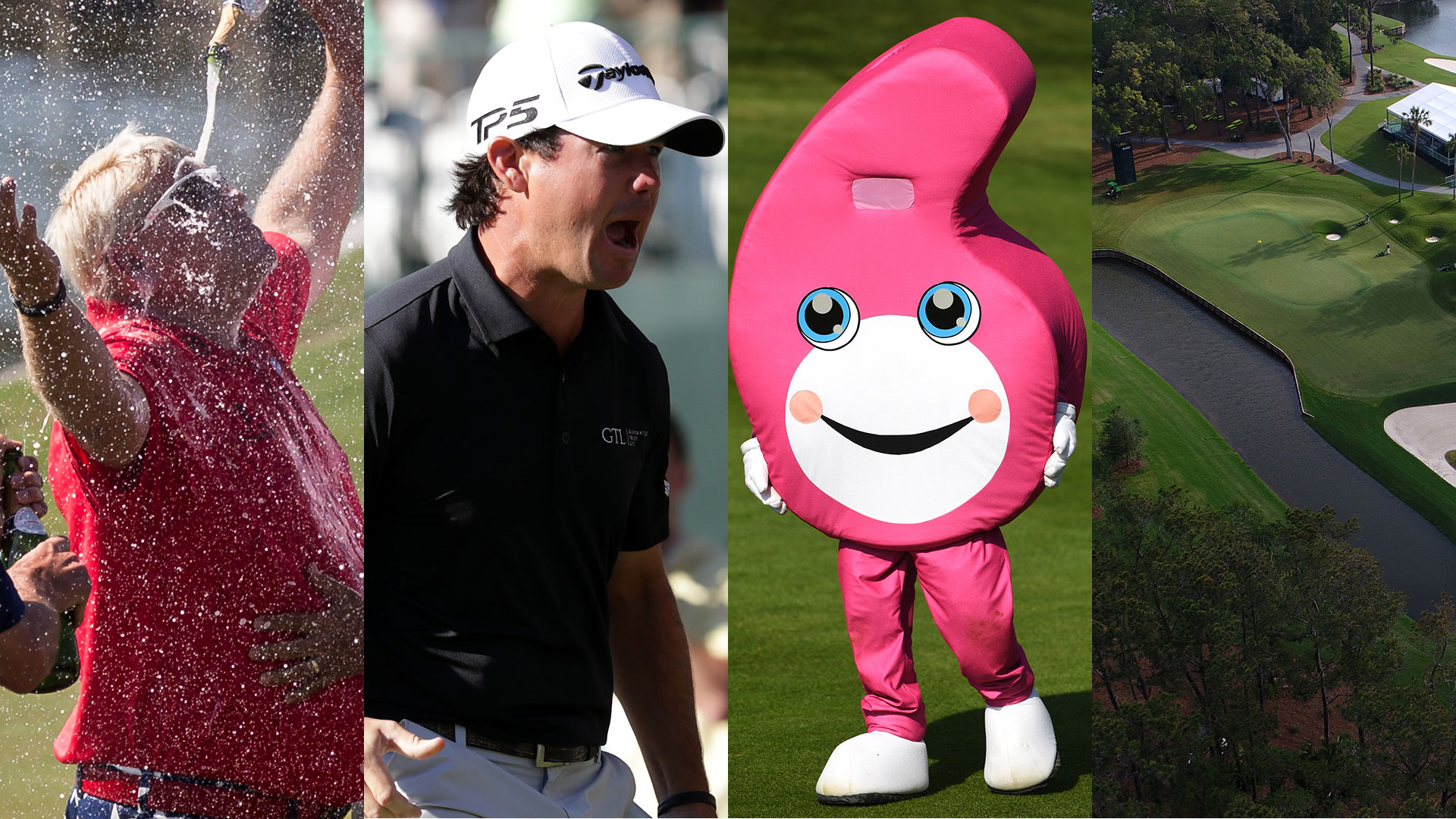 It’s not often that what happens on the senior circuit overshadows the PGA Tour, but never before has the PGA Tour Champions counted Daly as a winner.

His victory Sunday at the Insperity Invitational (his first official win since 2004) was the best-case scenario for a tour in dire need of a spark.

Bernhard Langer’s dominance is incredible. The influx of newcomers is intriguing. But there was no player on that circuit capable of galvanizing fans young and old like Daly.

Will his breakthrough result in a ratings spike for the senior tour? Probably not. But he can help bring more awareness to the level of play among the 50-and-older set, and he’ll be an even bigger gate attraction in each city they visit.

It's a win for everyone involved.

1. Despite arriving last year with much fanfare, Daly hasn’t dominated the PGA Tour Champions like many thought he could. In fact, his victory was his first top-10 in 22 career starts.

Daly says it’s because he was still learning the courses, so he couldn’t be as aggressive as normal. And he doesn’t do tentative very well.

2. Daly looked like he’d gone 13 years without a victory as he was coming down the stretch.

After building a three-shot lead midway through the final round, Daly’s advantage began to dwindle as he made bogeys on the 16th and 17th holes, bringing Tommy Armour III back into the mix. Daly dropped his third consecutive shot on 18, the most difficult hole on the course, but not before he kissed Arnold Palmer’s umbrella logo painted on the grass. He won by one.

It was the first time he’d held a lead heading into the final round since the 2005 AmEx Championship at Harding Park.

“Some guys come out here and win right off the bat, get the monkey off their back,” Daly said. “But now I can say I’m a champion on the Champions Tour, which is really cool, and hopefully I can keep this confidence going.”

3. Was there a more fitting victory celebration than JD getting showered with booze? This is a legitimate contender for GIF of the Year:

4. Leave it to the 5-foot-7-inch Harman to end the mighty DJ’s three-event winning streak.

With bold play down the stretch, including a pitching wedge to 4 feet on 17 and a go-for-broke 3-wood on 18, Harman pushed one shot ahead to win for the second time on Tour and the first since 2014.

Often overlooked because of his diminutive stature, the left-hander has been solid this season, with eight top-25s this calendar year. In his most recent stroke-play event, at Harbour Town, he tied for ninth.

He chose 3-wood and flew the green, leaving a delicate chip back toward the water. (He admitted afterward that he should have hit 5-wood instead.) With a few overhanging limbs, he couldn’t hit the high, floating pitch shot that he needed to, so he played safe, leaving himself a 28-foot putt for birdie that would move him one shot ahead of Johnson and Pat Perez, who were already in the house at 9-under 279.

“I did my best there and it didn’t turn out very good,” he said of the chip, “but I guess it was right where it was supposed to be.”

6. DJ was so rusty after a month off because of a back injury that he shot 10 under on the weekend and missed the playoff by one.

Yeah, he’s still the best in the world, and at this point, it's not particularly close. Over the past 20 years, only Tiger Woods has had a wider margin between Nos. 1 and 2 in the world ranking.

Johnson’s second-round 75 snapped a streak of 13 consecutive rounds of par or better. He made the cut on the number and figured to be out of the picture. Then he fired back-to-back rounds of 67, including a 72nd-hole birdie that gave him the clubhouse lead.

It wasn’t enough to join Woods (three times) as the only players in the past 60 years to win four tournaments in a row, but DJ is now 589-3 over his last five events. It was the first time he had lost since Pebble Beach.

“Physically, I’m really good,” he said. “Everything’s 100 percent, feeling great. I can swing at it no problem.”

7. During what has been a strange, inconsistent year for the game’s biggest stars, the only player who has been as consistently excellent as DJ is Jon Rahm, who now has five top-10s in his last six starts.

The 22-year-old Spaniard had the lead to himself on the back nine, but he played his last six holes in 1 over par to fall off the pace. Rahm needed an eagle on 18 to force a playoff, but he flushed his 5-wood 276 yards over the green, leaving a difficult pitch that he had to hole. He made par.

8. It was a final day to forget for the final group of Patrick Reed and Alex Noren.

They combined to go 8 over par Sunday, as both players dropped out of the top 10.

Reed’s plummet was particularly surprising, given his prior closing record (3-for-4) and steely reputation. He played his last eight holes in 4 over par, growing increasingly frustrated with his driving (just five of 14 fairways) and iron play (eight greens).

“Maybe a couple more loose shots today,” Reed said, “but at the end of the day I made absolutely no putts. You can’t have 32 putts on Sunday and think you’re going to win a golf tournament.”

9. A week after the PGA Tour hosted its first team event in 36 years, the European Tour put on an tournament complete with six-hole matches, music, pyrotechnics, dry ice, long-drive and closest-to-the-pin contests, rowdy crowds, shot clocks and a $1.1 million purse.

Indeed, by all accounts, the inaugural GolfSixes event was a big hit across the pond.

Golf... but not as you know it #GolfSixes pic.twitter.com/P9uNAGJYPS

Players, as they were in New Orleans, seemed energized by the change in format, a departure from the doldrums of 72-hole stroke play. They played the unique greensomes format, in which each player hits a tee shot, a ball is chosen, and the partners play alternate shot until the hole is completed.

Denmark won the final over Australia.

“We will always maintain the integrity of the game,” European Tour chief executive Keith Pelley said, “but at the same time, we’ve got to be entertaining. We’ve got to stretch beyond the norm, and I think that’s what we’ve done. Once you get the balance right, then you’re on to something special and something we can build on in the future.”

10. One of the most appealing aspects of the GolfSixes format was the introduction of a 40-second shot clock. Digital clocks were displayed at the green, fairway and tee, and players and their caddies were responsible for getting the shot away before time ran out.

The only player who was assessed a one-shot penalty for slow play was, perhaps not surprisingly, an American: Paul Peterson, whose mistake cost the U.S. team a chance to advance to the knockout rounds.

11. It might have looked like a mild upset on paper, but Sei Young Kim’s 1-up victory over Ariya Jutanugarn in the finals of the Lorena Ochoa Match Play wasn’t a surprise considering her level of play.

Kim, who moved to No. 8 in the world, trailed for just four of the 95 holes she played at Club de Golf Mexico. She jumped all over the world No. 2, taking a 3-up lead out of the gates after a birdie-eagle-birdie start.

Even with a shaky finish (an out-of-bounds tee shot on No. 17), Kim was able to hang on when Jutanugarn missed her 10-foot birdie putt on the closing hole.

“I never had such a hard win like today,” said Kim, who has now won six times since 2015. “I am happy that I was able to win and hold this trophy.”

12. TPC Sawgrass is already one of the most penal courses on the planet.

Making this week even more interesting are a few changes, namely that the 12th is now a drivable par 4 with water down the left. A pond has also been added between the sixth and seventh holes.

How players will attack these holes will be a big topic of conversation early this week.

Willy Wilcox was so poor on the greens last week that he joked on Twitter he was going to try putting with his eyes closed.

He would have been better off, because he instead chose to switch putters mid-round (the second round resumed Saturday morning). That's a no-no.

Wilcox was assessed a four-shot penalty … except he thought it was an automatic disqualification, so he withdrew from the tournament. He would have been six shots off the cut line anyway, but it was a bizarre end to a bad week.

Made an oops. Changed putters mid round.. over night.. thats a dq. Called self on it. Buh bye see ya n dallas

Jus got off phone with head rules official from Tour. Its a 4 shot penalty not a DQ. Jus an fyi

Still Not Connecting with the Common Man: Ian Poulter. The Englishman was mocked for asking his Instagram followers how they mark their practice balls, as if any of us hackers actually (1) have Pro V1 practice balls, or (2) concern ourselves with such inanity.

Now Off Twitter: Dottie Pepper. The CBS Sports analyst logged off the social-media site after being swarmed by Internet trolls who relentlessly ripped her for a condescending interview with Zurich co-leader Scott Brown, whom Pepper mistakenly said did not have a PGA Tour title. “Tired of the idiots,” she told SB Nation.

Still Got It: Lorena Ochoa and Annika Sorenstam. Competing together in the Hall of Fame exhibition match, Ochoa and Sorenstam, two of the best players of the past two decades, combined to shoot 5 under par and defeat Se Ri Pak and Juli Inkster by four shots.

All But 2 of the Top 50: The Players field. One of the deepest tournaments in golf will feature 48 of the top 50 players in the world. The only guys who won’t tee it up are Belgian Thomas Pieters and Brandt Snedeker, who injured his hand at the Masters and doesn’t want to jeopardize his status for next month’s U.S. Open.

Verbal Commitment: Baby Fitz. Matt Fitzpatrick’s younger brother, Alex, has committed to play college golf at Wake Forest, a top-10 program, in the fall of 2018. His older brother stayed only a semester at Northwestern before turning pro. “Hopefully last longer than my brother,” Alex tweeted.

Fashion Statement of the Week: Rickie Fowler. His outfit at the Kentucky Derby was, in a word, bold. But then again, your trusty scribe used to wear a velour track suit in the winters, so who are we to judge?

Blown Fantasy Pick of the Week: Webb Simpson. The unofficial ambassador at Eagle Point, he was supposed to have invaluable course knowledge that would propel him into contention … or to rounds of 73-75 and a missed cut. Sigh.