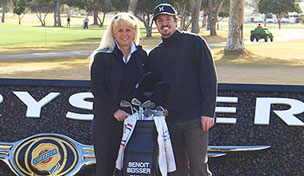 With his head half buried into an enormous Philly cheese steak, gingerly lounging in the back of a tiny, hole-in-the-wall restaurant 45 minutes outside of San Francisco, it hits Benoit Beisser like a two-ton truck.

It doesn’t get much better than traveling and playing golf.

Sure, the pragmatic Arizonan has seen the country from his time in the junior ranks – plenty away from the game to boot. And he’s said how much he loves his life at home in Scottsdale. But his professional life has centered around a non-traveling tour there since he’s turned pro, so he’s not yet fully tasted the travel-play-travel lifestyle common to the top levels of professional golf.

That finally changed a couple weeks ago at the Nationwide Tour’s Fresh Express qualifier, which, oddly, for a player of his experience, was his first attempt at a Nationwide ‘Monday.'

“I think it excited me more to go get it done and just see what it’s like to do the travel and play thing in the middle of my schedule, than anything else,” explains Beisser of removing the proverbial monkey off his back. “I just haven’t done that as a pro, so I wanted that experience and I also wanted to see where I’m at with what’s out there, and whether that’s something I may want to do a lot more in the future.”

Beisser had just arrived to town – 4 p.m. on the Saturday before his Monday start – when that internal light flickered inside the restaurant so aptly named, The Philadelphia Steak Shop.

Amid all the success Beisser’s seen on the Gateway Pro Tour, he realized his love for traveling had been shirked off to the side; saved away for another place, another time.

But, with mom/caddie, Deanna, by his side – as always – deep in the hills of the Golden State, it donned on Wah he has the ability to encompass the best of both worlds. Right here. Right now.

“I’ve always loved to travel. I just love exploring,” Beisser says. “That’s half the fun. I love exploring little towns; finding cool, little places to eat and playing new courses. Anytime you can play a new course, as a player, that’s something cool. It’s a new experience and you’re able to test yourself with something you've never done before.”

Beisser finishes his epiphany-laden sandwich – for such a lean, yoga-enhanced health nut, the guy can put food down with the best of ‘em – before he heads out to the site of the qualifier for a little chipping and putting, and to get an overall feel for the place.

Off to bed early that night, he hits it first thing Sunday morning – a 6:30 a.m. practice round – with a few fellow Gateway buddies also set to tee it in the qualifier.

Two of his three partners had played the course before, making for a great measuring stick of how it might play and what score could light up the magic number.

“I’ve said it before about a lot of the guys I play with (on the Gateway Pro Tour) . . . we’re all buddies and we all support each other with our careers,” says Beisser. “It was great to play the practice round with those guys because I was able to listen to what they had to say (about the course) and we were all able to bounce ideas off of each other about how to go about it.”

Most professional golfers approach practice rounds in a scientific way. They map out a strategy and plan based on possible pin placements, weather/course conditions and different scenarios they might face while in the tournament – always living with the philosophy that the more prepared, the better.

Beisser squeezes every last drop out of this one, priming himself for a perfect Monday run to the finish line.

“It was great. Those guys walked me through (the round) perfectly and we all decided that probably four or five under would be the number,” he surmises. “I knew I could get to three of the four par 5s in two, so my plan was to stay aggressive on those, do what I could on the par 4s and try to get by on the par 3s.

“Most of the time in tournament golf it’s the par 3s that can be killers, so you take your medicine on those and do what you can on the other holes.”

As with everything else in his life, Beisser’s philosophical about his go-time plan.

“I guess you could call it trying to be ‘smart aggressive,’” he says. “You don’t want to be overly aggressive because you can shoot yourself out of it pretty quickly, but you still have to look at almost every hole like a birdie hole, because there’s no second or third round to make up ground if you’re not taking advantage on every hole.”

It's also filled with a twist of his personality.

“You always know what you want to do,” Beisser states, “and when you get out there, if it goes your way, it goes. But sometimes you may need to adjust and be more aggressive if it's not, and at that point you push it as much as you can and just go for it.'

The bell rings Monday and Beisser posts 2 under on his first nine – carrying out the plan to a T. A lipped out birdie effort on the ninth hole would’ve even put him ahead of the game.

But, then playing Nos. 10-15 in even-par and – exactly to his point – Beisser sees he’s running out of holes.

“I just couldn't get anything to drop,” he explains. “I knew I needed to press it on the way in.'

A par at the 16th results in going for a tough pin on the par-3 17th, which results in a missed green and bogey. He pars the last, signs for a 1-under 71 and, just as he predicted, 4 under gets into the event.

Nevertheless, Beisser takes away what he needs and, as always, remains optimistic about his game.

'This just showed me that I'm super close to where I need to be and motivated me to come back and work harder,' he says. 'Guess you could say it kind of lit my fire to go do these on more of a regular basis.'

Beisser will finish out the Gateway Pro Tour Arizona Series in its entirety – six more events – before trying his hand at more Nationwide Tour qualifiers in July, preceding his summer trip back to the Golden State to play the tour's California Series.

Beisser missed his second cut of the year on the GPT after returning from his trip, starting the event just a day after he got back.

'I had played the course plenty of times, so I was prepared for it that way,' he explains, 'and I held my own that first day (with a 4-under 67), but I think (the travel) caught up with me that second day. I had a hard time staying focused.'

Beisser posted a 3-over 74 – his second highest round of the year – in Round 2 to miss the cut by four.

He rebounded last week in his next event, however, finishing tied for fifth with a closing round of 5-under 67.

His game's been there all year.

'It's going alright, right now,' Beisser says. 'I really want to win one before the (GPT Arizona Series) is done and then go do some more of those qualifiers this summer and see how far I can get.'

There's an old Mongolian proverb that says, 'A traveling fool is better than a sitting wise person.'

Beisser understands this now. He understands he can get pretty far with those qualifiers, too.

And he's no fool to think it doesn't get much better than traveling and playing golf.