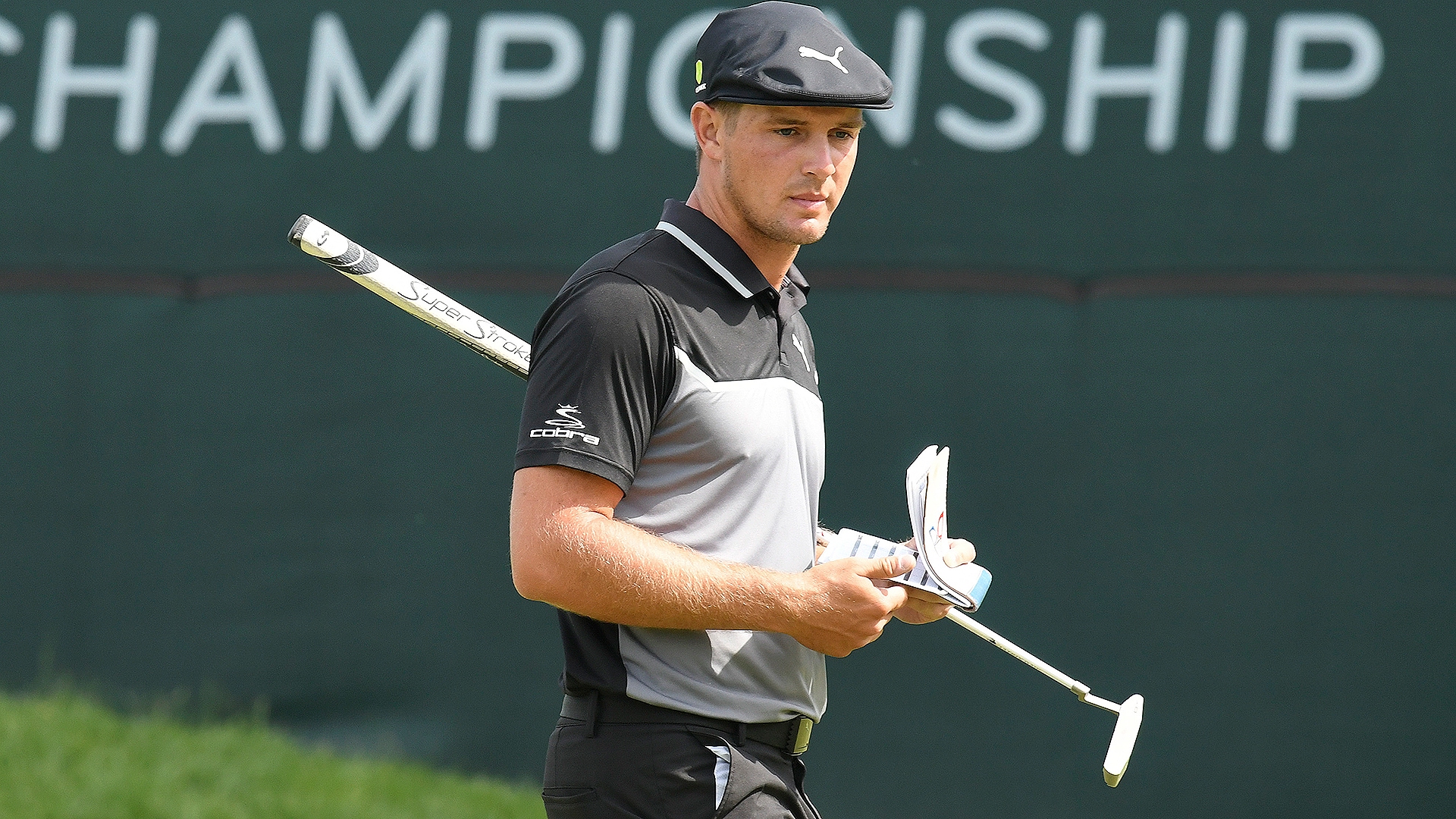 Bryson DeChambeau defends a PGA Tour title for the first time in his career this week, and will do so without his trusty "drawing compass” – the same one most high school students leave behind in their geometry classes.

The USGA banned DeChambeau’s measuring device last week, which, ironically, he wasn’t using to read the 12-foot birdie putt that won last year’s John Deere Classic, or the 12-footer he made on the third hole of a playoff to win this year’s Memorial Tournament.

In the wake of the ruling, DeChambeau has gone silent. He plans on making a statement at a Wednesday news conference in Silvis, Ill., deflecting follow-up questions and moving on. With the Open Championship coming up and a genuine chance to make his first Ryder Cup team, DeChambeau is hoping to make his golf speak for him while he sorts out a new invention for his science of green reading.

Leave it to the 24-year-old golf scientist for creating such a bizarre controversy. Known for his single-length irons and sidesaddle putting stroke, DeChambeau pushed the boundaries trying to make up for slightly askew measurements on the Tour’s pin sheets, when breaks didn’t match up to the contours in their yardage books.

“Maybe he outsmarts some of the other guys because he takes a different approach to the game,” said DeChambeau’s manager, Brett Falkoff. “He’s doing it different, his way.”

According to Thomas Pagel, the USGA’s senior director of rules, DeChambeau’s manner in this case was addressed in the first part of Rule 14-3a. The rule prohibits a player, during a stipulated round, from using any artificial device or unusual equipment, or using any equipment in an abnormal manner, that “might assist him in making a stroke or in his play”.

The protractor/compass was addressed in what Pagel described as a “general bucket for unusual equipment.” The way Pagel described it, the USGA’s ruling was to assure that skill and judgment are still retained.

It was in a 45-minute phone conversation with John Bodenhamer, the USGA’s senior managing director of championship and governance, that DeChambeau was delivered the decision. It could have been worse had Bodenhamer and his associates ruled that it was a breach of the rules and thus a disqualification after examining the Travelers Championship video that was brought to the attention of the USGA.

“We consider him part of the family,” noted Pagel. By that he was referencing DeChambeau’s 2015 U.S. Amateur victory. In his conversation with the USGA, it was understood that DeChambeau would continue pushing rules’ limits.

“That’s great,” Pagel said. “That’s the level of dialog we want. We love the fact that Bryson is known for innovation and pushing the limits.”

By releasing a statement on July 5, the USGA came out looking like the bad guys. It was actually Tyler Dennis, the Tour’s senior vice president of competitions, that initiated the process by reaching out to the USGA after DeChambeau’s use of a drawing compass was raised by another rules official watching the Travelers on television (DeChambeau finished T-9).

“Like Bryson said, ‘I start playing well and people start noticing different things,’” Falkoff said. Other members of DeChambeau’s team questioned how the use of a range finder or other distance measuring devices in USGA amateur championships is legal while a drawing compass is not. It was also confirmed that DeChambeau had been using the device on and off for two years.

“We kept walking off greens saying, ‘What’s going on, why didn’t it break properly?’” said DeChambeau’s swing coach, Mike Schy. “If you miss a pin placement by 3-4 feet, that can be huge.”

This was the second time DeChambeau pushed the limits with old-school instruments and was overruled. In January 2017, his sidesaddle putter was deemed to be non-conforming.

What will DeChambeau come up with next?

“He’s working on a couple different things that he can come up with,” said a source close to DeChambeau. “He’s always been an innovator in trying new things … so it’s not going to stop him.”