Hugh Grant, Samuel Jackson, Huey Lewis, Marcus Allen... and Tom Abbott? Doesn’t really have a ring to it does it? But, sure enough, my name will be listed among the rich and famous this week as I tee it up against them at the Alfred Dunhill Links Championship.

The tournament very kindly offered a spot in the event to one of our on-air folks…no-one else could make it, so they were forced to send yours truly. I found out about this a month and having not played competitive golf since college, I realized the prospect was rather daunting and called for immediate action.

A bit of grinding on the range, a trip to The Concession to have a session with swing guru Jonathan Yarwood and a few rounds later, my golf hasn’t really seen much improvement. So the Scottish spectators better watch-out…'fore-right' could well be the saying of the week. Yarwood’s comment about my swing having, “more planes than Delta” may be one reason the ball is not going in the desired direction.

I don’t think I could be in for more of a dramatic change that what I’m about to experience. Last week I was with our Golf Channel Amateur Tour National Championships at PGA West in La Quinta, Calif. The high temperatures ranged from 104 to 114 degrees. In fact, as I sit writing this at Denver International Airport, I haven’t seen a cloud since I was back here a week ago. If I see blue sky this week in Scotland, I’ll be lucky. The temperatures will be in the 50s, there will be some rain, and on Saturday the wind is supposed to blow to 30 mph.

The Alfred Dunhill Links Championship is a four day pro-am tournament on the European Tour schedule. Three courses are used over the first three days – Carnoustie, Kingsbarns and St. Andrews' Old Course – with 168 amateurs and 168 professionals. Teams are formed with one amateur and one professional playing better ball, with amateurs using two-thirds of their club handicaps. The leading 60 pros and 20 teams make the cut after Round 3, with the final round played at St. Andrews.

My golf may not be good this week, but at least I’m going to look the part. Titleist has very kindly sent me a huge staff bag with my name as well as a huge Golf Channel logo on it. My poor caddie will not be amused when he sees this thing. Club Glove sent me a few of their swanky new towels, which will come in handy in the rain, plus I got my hands on the biggest travel bag I’ve ever seen.

The only worry is whether the clubs will arrive with me as the journey to Edinburgh took a bit of a hiccup here in Denver with a three-hour delay, forcing some rejigging of routes. Hopefully, I’ll be on site by late afternoon on Tuesday, but with airlines cutting flights, the options are slightly more limited than they used to be. Still, it gives me more time to sit and think about that first tee shot at St. Andrews. 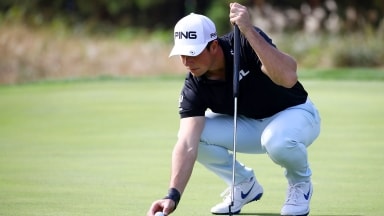 It didn’t take long for the European Tour’s new pace-of-play policy to have a significant effect, per this story from Viktor Hovland. 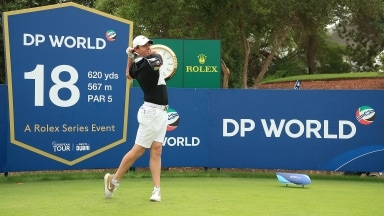 Rory McIlroy can win a third DP World Championship on Sunday but not a fourth Race to Dubai.