Catching up with Nancy Lopez at the new Max A. Mandel Golf Course in Laredo, Tex. 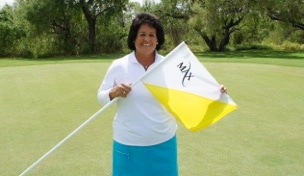 Getty Images
The pressure is on Mark Rypien as his team looks during a chipping challenge on Big Break NFL Puerto Rico.  -

Well before Annika Sorenstam or Lorena Ochoa came along to dominate women's golf, there was Nancy Lopez. Growing up in Roswell, N.M., with her self-taught swing and abundance of talent, she didn't just win at a young age, she lapped the field.

She won the New Mexico Women's Amateur at age 12, U.S. Junior Girls and in 1972 and '74, was an all-American at the University of Tulsa and took the LPGA Tour by storm her rookie year in 1978, winning nine times in her first full season on the tour. More than that, she brought a new presence to women's golf. With her winning smile and dynamic personality, golf fans tuned in just to see her play. In an LPGA Tour career that spanned three decades, the World Golf Hall of Famer won 48 times.

Fast-forward to 2013: Lopez, 56, is a grandmother, trying to rediscover her culture and looking at golf in an entirely new way. She still plays the occasional competitive round in LPGA Legends event, but she mostly plays golf for fun. She's taken a run at designing a course and has some definite ideas about where the game should be headed.

We sat down with Lopez recently in Laredo, Texas, as she took part in the grand opening ceremonies of the city's Max A. Mandel Golf Course, which should provide opportunities for juniors of all backgrounds the chance to discover their talent, much the way Lopez did nearly a half decade ago.

GC: You grew up playing golf on a municipal course in Roswell, N.M. What are your fondest memories?

Lopez: I remember how hard my dad just worked to give me a few opportunities to play in the tournaments that we could afford. He taught me a lot of things in life, how to live my life right. He was always good with people and his shop that he owned he always tried to things right for his customers (he fixed their cars). If he didn't fix it right, he would do it again. People trusted him. He was just a good father. My father was my best friend.

He taught me on this municipal course like it was a championship course. You could hit everywhere and still make birdie, but he taught me right away to focus. He said to me, 'Nancy when you're on the tee I want you to look right down the middle of the fairway and focus on your target.' He said if you hit it out of the fairway, you're out of bounds -- two shots.

GC: Talk about your heritage and its role in golf.

Lopez: I'm very proud to be Hispanic, Mexican American or whatever you want to call me. I know that I'm Hispanic and my relatives are from Mexico. I really miss that living on the East Coast. My dad was a wonderful man -- a true Hispanic. He worked very hard and gave me everything he could.

GC: He was very proud of you, wasn't he?

Lopez: Yes he was, and so was my mom. I always remember the good times of life when I was growing up on a municipal. That was very my favorite time.

GC: Do you miss New Mexico?

Lopez: I would love to move back here, but my kids are all on the East Coast. I've got one in Florida and one in Atlanta. I think I miss the desert. I miss friends and I miss hearing the Spanish language. I miss eating good Mexican food -- really good Mexican food. I have a place in Colorado, but it's still too far from New Mexico and really too far from my kids. I'll probably end up living in Florida.

GC: You daughters didn't play golf. Now that you're a grandmother, though, are you hoping you can pass your knowledge to another generation?

Lopez: My oldest daughter, Ashley, had a little girl named Molly. She lives in Venice, Fla., and I plan to visit her at least one a month, if not more. I hope she lets Grammy – that's what she calls me – teach her how to play the game, and that she'll love it the way I did.

I really want to try to introduce her to golf as soon as I feel like it's the right time. I think I can teach her what my dad taught me because he helped me love the game, and I'm hoping though me I can help give her what my dad did for me in the game.

Lopez: I was on the golf course all the time. I played in my first pee-wee event when I was 8 in Alamogordo, N.M., and I won by 110 shots (over three days). I was still shooting 65 for nine holes, which is high, but nobody else was close to that.

GC: What are some of your favorite golf courses?

Lopez: The thing is we really never played all the great golf courses on the LPGA Tour. We played good golf courses but not big-name courses. In the past few years I've been able to play courses I never played. Last year, I got to play Whistling Straits, which was my first time playing there. I have to say that's my favorite course so far and I'm going to keep traveling and play just as many courses as I can.

GC: What do you think of golf course design today?

Lopez: We're always trying to build golf courses for the professionals and not the people who support the game. They need to build courses like this (Max A. Mandel) for people who support the game and can enjoy the game. I remember when I was poor I had to pay for everything. Now that I have money I don't have to pay for anything. It doesn't make sense.

GC: What drives you today?

Lopez: I work with handicapped children and for me to be able to swing a golf club makes it appreciate what I have. When I played golf competitively and I had a bad round, I thought about all my handicapped children. They can't swing a golf club and some of them can't walk. Some can't even hold their head up. Everybody should play the game with that kind of a happiness and not be club-throwers or anything like that.

GC: What are your thoughts on the LPGA Tour and state of the game?

Lopez: I'd like to see more Americans winning. The Koreans are great players and they're great people too. Unfortunately, they're better than us right now. It bothers me. Because when you live in the United States of America you want a U.S. player to win. That's what's going to keep interest in golf.

But please watch us, no matter who's winning. Because it's a great sport and we've got wonderful beautiful players on the LPGA Tour from all over the world. And fans really need to show their love by supporting us. If they do they're going to see great golf.

GC: You designed a course, the Nancy Lopez Legacy Country Club at The Villages in Florida. How was that experience?

Lopez: I had never done it before, so I didn't know for sure if I would like it. I know I love trees and I didn't want them to cut very many down. When I stood on dirt tees and started looking out, I could visualize holes on courses I had played, and I didn't think I could do that. I visualized where I was going to put bunkers, where I was going to leave trees. I'm very proud of it. I built it so people could play it. I didn't build it for the professionals. I built it for the people at The Villages who were older can enjoy the game. And we gave women two tees so they would have more options.

Lopez: If I'm asked, I would love to.