Good golf, eats and a lot of Elvis make for a memorable road trip to the Northeast 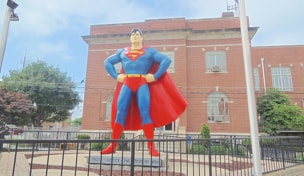 Getty Images
MOBILE, AL - APRIL 29: Paige Mackenzie hits her tee shot on the 11th hole during the second round of the Avnet LPGA Classic at the Crossings Course at the Robert Trent Jones Trail at Magnolia Grove on April 29, 2011 in Mobile, Alabama (Photo by Scott Halleran/Getty Images)  -

HOUSTON, Tex. -- From Houston to Boston, back through Pennsylvania and parts of the Midwest, last week I returned from the longest golf road trip I've ever taken – 5,000 miles and 17 states over 26 days.

Accompanied by my girlfriend Nancy, we made plenty of discoveries. Here are five revelations from our nearly month on the road:

Elvis hasn't left the building: I can now cross Graceland off the bucket list, and quite frankly, I never want to go back. I got enough Elvis mania in one day to last a lifetime. While I can certainly appreciate his immense career in such a short span (he was 42 years old when he died), Graceland is over the top. The mansion is smaller than most people realize, but there are more than a half-dozen areas outside of the mansion to explore. Graceland seems to have more gift shops than Disney World, hawking every imaginable keepsake and trinket. Overall, it's impressive with the cars, planes, early life, Hawaii and Vegas jumpsuit exhibits; it's just a little too much for a casual fan like me.

As for the golf, Justin Timberlake owns a course in the Memphis area -- Mirimichi (formerly Big Creek) --- and the PGA Tour plays the St. Jude's Classic at the TPC Southwind. But if you're looking for some affordable, fun golf, you might want to check out Orgill Park Golf Course in Millington, Tenn., just north of the city. Opened in 1972, Orgill Park has no bunkers, but it's built around a lake so it's certainly interesting. On the way, be sure to pick up a pulled pork barbecue sandwich or slab of spare ribs at Payne's or Central Barbecue. Memphis is famous for it.

Lobster-golf combos: With a local's guidance, we found some great lobster (pronounced lobstah) spots. First, the Plymouth, Mass., area is littered with them, like Wood's Seafood, where you get the whole thing, claws and all, fresh from the sea on a paper plate and affordable (under $20). Even a local chain restaurant, the Ninety-Nine, offers an incredible lobster roll, dripping with butter, if you like it that way.

For golf, I'm a big fan of short courses and the Plymouth area has a couple of really good ones. Squirrel Run is a cool par 57 course with three par 4s to satisfy the need to hit the big stick off the tee. (I don't care where you play, but walking off the course after you just shot a 62 is great ego booster.) The other course is Village Links, just down the road. Both are designed by Ray Richards and excel in fun. They're in great shape and easy to play for beginners, but a blast for good players as well.

Penn golf rocks: When we first arrived to the Northeast, it was as hot there as it was here in Houston. But right around July 20, things began to cool off in Pennsylvania, where the highs remained in the low 70s for about a week. Combine that with some spectacular topography and you've got a winning combination in the summer.

This part of the journey started in the Scranton area, where the Italian food was to die for (check out Gubbio's in Dunmore, Pa.). We played a private club, Elmhurst Country Club, which used to host a Web.com Tour event. Elevated tees, perfect temps and endless views of the Endless Mountains combine for a memorable golf experience. A couple of hours south, in the Philly area, I got to check out Gil Hanse's first American solo design, Inniscrone Golf Club in Avondale, Pa. It had a couple of quirky holes, to be sure, but was definitely memorable. Later, about 300 miles west, we found ourselves in the Pittsburgh area. With the Allegheny Mountains as a backdrop, this region of the country doesn't get enough credit. At the Madison Club just outside of Pittsburgh, for example, it was pure serenity -- no homes, plenty of deer and elevated tees with views of the Allegheny Mountains as far as the eye could see. No winning against Pete Dye: As we made our way through the Midwest, we landed in the remote town of French Lick (famous for being the home of Larry Bird) and the French Lick Resort. While I was there, the PGA of America announced that the Pete Dye Course would play host the 2015 Senior PGA Championship.

Simply put, the course is one of the most difficult in America. It can be tipped to more than 8,000 yards, but that's hardly the biggest problem. No matter what tees you play, the landing areas off the tee are tight, and if you miss, you pay the penalties with rough, awkward lies and perhaps a lost ball. (I think I hit one fairway all day.) The course is hard, no doubt, but Pete wins if you fight what he wants you to do. I hit driver on almost every par 4 and par 5, and that was a mistake. Getting it in the fairway is more important, which means I should have played 3-woods and hybrids off of most of the tees. With that said, the Dye Course is one of the most scenic in America. Built on one of the highest points in Indiana, the views are breathtaking and conditioning if flawless. It should make for an interesting Senior PGA in '15. Plus the resort – home of the famous domed West Baden Springs Hotel -- has another championship course, and it's awesome. The Ross Course has a great history with some pretty good views as well, and it's considerably cheaper to play than the Dye, which has a $350 rack rate.

Casino golf and more BBQ: Nothing against Dye – I really do appreciate his style, and Indiana is home of the Pete Dye Golf Trail – but one of the most enjoyable courses I played in the Hoosier State was in the Cincinnati, Ohio area just across the state line. Belterra Casino Resort has a top-notch Tom Fazio track that takes advantage of the Indiana terrain and then some. Again, with no homes, the Belterra Casino Course is a pure joy to play with lots of memorable holes, including a finishing stretch that ends with a fun risk-reward par 5 in front of the hotel.

Once we left Indiana, there were more surprises ahead. We went through Metropolis, Ill., which, has a giant statue of Superman in front of the town's square. And having been tipped off by Good Morning America weatherman Sam Champion, we checked out Starnes Barbecue in Paducah, Ky., which was still pretty much as it was in the 1950s. Pulled pork sandwiches on buttered toast topped with Starnes' spicy house sauce is as good as it gets. Later, as we finally made our way back into Texas, there was more barbecue heaven at Tommy's in Atlanta, just south of Texarkana. Tommy has a lot of great stories (he used to drag race and hang out with Richard Pryor, for example) to go with his home-style cooking. Maybe it's just me, but barbecue tastes better with a good story… And now that I think about it, golf's better with a good story as well.