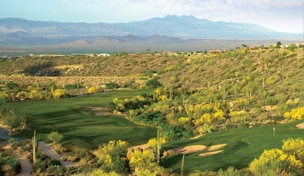 Just in time for prime season, two Scottsdale-area golf courses are set to reopen this fall.

In Paradise Valley, the 36-holes at the JW Marriott Camelback Inn is getting what amounts to a new course with the opening of the new Ambiente Course in early November. Ambiente, which means 'environment' in Spanish, replaces the old Indian Bend Course, originally opened in 1970.

Meanwhile, down the road in Fountainview, Ariz., SunRidge Canyon Golf Club will reopen on Oct. 4 with improved greens, bunkers, drainage and less areas to find trouble, as well as a new food and beverage operation.

Designed by notable golf architect Jason Straka on behalf of Hurdzan/Fry Environmental Golf Design, Ambiente has 12 entirely new holes. The work started with the rebuilding a desert wash that runs throughout the property to help restore flood control to the property. The plan also called for the removal of 100 acres of maintainable turf areas and reintroducing desert terrain, designed to solidify Indian Bend's status as an Audubon Sanctuary course. Ambiente will feature five sets of tees (two sets more than Indian Bend) and stretch to over 7,200 yards, while the new forward tees have no forced carries and offer easier approach angles. In addition, the 122,000 square feet of greens features plenty of movement.

'While Ambiente is sure to distract golfers with its natural beauty and breathtaking views of Mummy Mountain, Camelback, the McDowells and the Phoenix Mountain Preserve,' said Jim Rose, general manager of the JW Marriott Scottsdale Camelback Inn Resort & Spa, 'our golfing guests will find a friendly test of skill and shotmaking that will redefine the golf experience at a resort long known for its exceptional service, palette pleasing food, luxurious accommodations and spirit of adventure.'

Ambiente is in stark contrast to the other course at Camelback, the Padre Course, which was redesigned in 1999 by Arthur Hills. Padre is parkland style with plenty of water hazards, pines and eucalyptus trees.

SunRidge Canyon, a 6,871-yard par 71 designed by Keith Foster, closed down on July 1 to undergo multiple improvements. The greens have been heavily aerated and are in terrific shape, according to Kris Starr, director of golf operations. In addition, 31 tees were leveled and reseeded, key landing area as well as bunkers were softened, family and beginner tees were added to the course, and several overgrown areas were de-vegetated. The facility also added GPS systems for its golf cart fleet.

Off the course, SunRidge Canyon owners Don and Cindy Mischeff have formed a partnership with Michelin five-star, five-diamond chef Michael O'Dowd and concert promoter Ed Leclere to operate the new Wicked 6 Bar and Grill by MOD, named after the course's tough finishing stretch.

'With all the improvements we continue to make, we hope we have created the most unique and memorable golf experience possible for our guests,' Starr said. 'As always, we will maintain our focus on customer service and relationships being our No. 1 priority.'