Window Shopping: Golf in Los Angeles on any budget 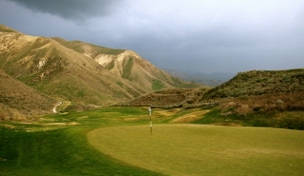 Getty Images
CITY OF INDUSTRY, CA - MARCH 26: Beatriz Recari of Spain hits her tee shot on the eighth hole during the third round of the Kia Classic on March 26, 2011 at the Industry Hills Golf Club in the City of Industry, California. (Photo by Scott Halleran/Getty Images)  -

Ultra-private Riviera Country Club in Los Angeles boasts famous Hollywood members and captains of industry as members. But what many across the country are unfamiliar with, however, are the vast public golf offerings of L.A. The quality and the quantity may surprise you, but it shouldn't. After all, Los Angeles is the country's second largest city with arguably some of the best golf weather in the nation.

The key, however, to planning a golf trip to Southern California is figuring out where to play vs. where to stay. You don't want to be making a 30-mile trip to any golf course anywhere near rush hour, and the L.A. area is pretty much one big rush hour from 6 a.m. into the evening. So if you're going to Disneyland, for example, you would be best advised to play golf in Orange County, which has some pretty good options, like the Black Gold Golf Club, a really nice Arthur Hills design just 10 minutes from Disney, or Tustin Ranch Golf Club, 6,800-yard Ted Robinson design with beautiful water features. Coyote Hills in the foothills of Fullerton is a premium Cal Olson design, Talega Golf Club, is a fun Fred Couples layout with a Spanish hills theme located in San Clemente. Or for some scenic ocean views, play the impeccable Monarch Beach Golf Links.

Many of these courses can be played for less than $100, but you might want to pay a little more than that to check one of California's can't-miss premier public golf offerings, Pelican Hill in Newport Coast. This 54-hole resort features three Tom Fazio designed courses, including two on the ocean with views of the Pacific you won’t likely forget.

If you haven't had your fill of showy ocean courses, there's also Trump National in Rancho Palos Verdes. At over $250 million, it's one of the most expensive golf courses ever built. A great deal of the cost came as a result of the 18th hole of the original course, Ocean Trails, falling into the ocean right before it was to reopen under Trump in 1999. Trump rebuilt the hole and added some more lavish touches to the course before it opened in 2006.

There are many other great daily fee options through the L.A. area for all budgets. Out in Simi Valley is Lost Canyons, a 36-hole facility well worth the drive northwest of Los Angeles. This Pete Dye-designed facility has fantastic panoramic views as it winds its way through the Santa Susana Mountains. And at the base of the Angeles National Forest is where you will find the only Jack Nicklaus design in Los Angeles County, Angeles National. While you're in the area, you should also check out Robinson Ranch, another delightful 36-hole facility that offers great views of the Santa Clarita Valley below.