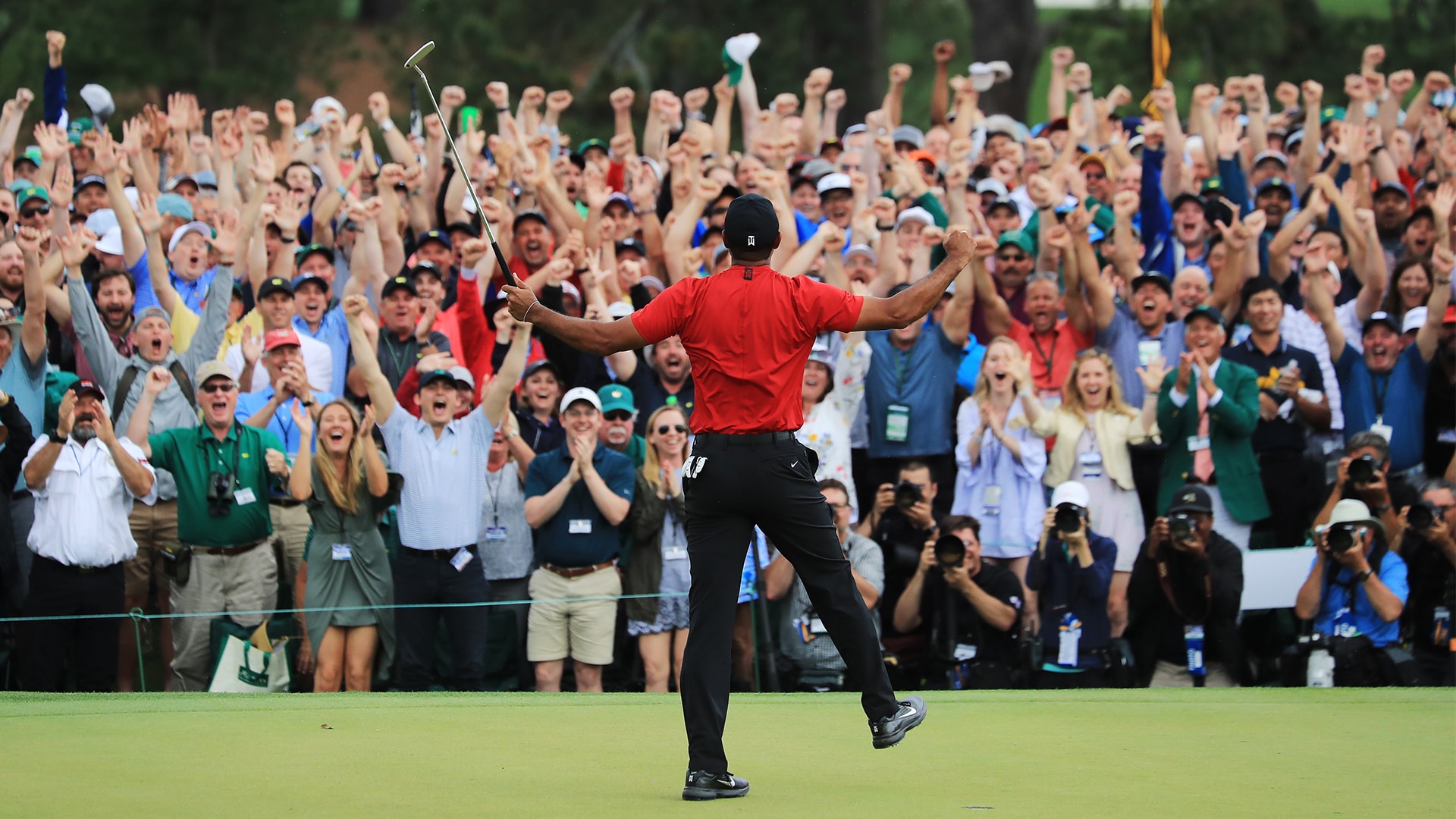 Augusta National is the kind of place that so often feels like a time warp. The umbrellas across the veranda outside the clubhouse could be featured in a 1950s documentary, and the anti-technology stance the club both enforces and embraces means that options for patrons looking to keep pace with the action are few and far between.

So when a roar piped out from the valley below Sunday afternoon, the location and meaning were unmistakable: something important had just happened on the 16th hole. In an age when every bit of information is just a Google search away – anywhere but inside the pearly gates of ANGC – thousands instead craned their necks to make sense of a big white board in front of them.

First it was MOLINARI, then FINAU. Both pars. It meant only one thing, and the murmurs quickly picked up steam. But as the score line next to WOODS was pulled down, everything came to a screeching halt. Patrons, lined 10 deep around the final green in anticipation of what was to come, all fixated their eyes on a tiny hole in a humongous metal structure above their heads. Some instinctively put their hands in the air, as if about to crest the hill on golf’s biggest roller coaster.

The gap in the board remained. Were there clocks around, they surely would have ceased to tick for just the briefest moment.

It did, and it was, and it led to an ovation that shook the final green, eclipsed only by the one unleashed a few minutes later when Tiger Woods himself walked up to put the tournament away.

As soon as Francesco Molinari’s ball inexplicably found Rae’s Creek on the 12th hole, an electric buzz took over the second nine of Augusta National. The crowds condensed with each passing hole, as the leaders made their way along the same turf that Sarazen, Hogan, Palmer and Nicklaus strolled to victory so many years ago.

The patron cheers, usually reserved for birdies and eagles, now resembled an echo as the status of Woods’ comeback was relayed via red numbers on a white backdrop. Each stroke lost or gained quickly rippled across the closing stretch, one scoreboard after another.

It was a dichotomy only Augusta National can produce, one of abundant anticipation and insufficient information. But the sense was undeniable: something special was in the air at a place where special things have a habit of happening.

“Oh s---, it’s on!” said one patron behind the 13th green after news of Molinari’s double bogey on No. 12 made it to the scoreboard fronting the 14th tee.

“Just another Sunday in Augusta,” shouted another on 15, moments before an ill-placed pinecone sunk the Italian’s green jacket chances for good.

By the time Woods actually got to the 16th green, where he had just unleashed a shot and sparked a cheer that was felt by the big oak guarding the clubhouse half a mile away, Brian Jones was in disbelief. Having made the trek from San Diego for his first Masters, Jones didn’t hide his allegiance: black pants, red Nike shirt (with collar), topped with a black hat with Woods’ insignia. He came across the country with hopes of witnessing history.

Jones watched Woods pour in his final birdie of the tournament at 16, his brother-in-law Dan Stephenson sustaining a thick mud stain on his left knee for their efforts, and then he raced behind the 18th green as quickly as possible. Without, you know, running.

So even after Woods holed his historic final putt, even after the clubhouse staff returned to their posts after popping out to savor and celebrate the winning shot, even after he walked past thousands of patrons chanting his name and lifting their hats in his general direction, Jones and Stephenson stood soaking in the scene just off the first tee box.

“I cried just now,” Jones said. “I’ve been waiting for this moment for 11 years, and I was here for it. It’s really special, and I still can’t believe it actually happened. I never lost hope, but I was so used to something going wrong.”

Eventually, Jones and Stephenson began heading for the exits as weather warning sirens began to blare across the course. But then an unexpected scene broke out on the practice putting green, where the traditional green jacket ceremony usually takes place but had been cancelled this year with the approaching storms.

But there the ovation grew into a full-throated exultation, as Woods emerged from Butler Cabin and made his way onto the green with patrons quickly flocking to his side. They cheered his every move and cheered louder when Patrick Reed slipped the jacket on him.

But Woods’ most emotional moment in this impromptu portion of his celebration came as he was walking off the putting green and spotted Hal Jacobs, who has been a contributor to Woods’ charitable foundation for years. Woods recognized Jacobs in a procession line that wrapped toward the clubhouse, and without breaking stride he bolted to his left and gave him a bear hug that elicited a cheer of its own.

“Can you believe it?” Woods exclaimed, the buttons of his fifth green jacket brushing against Jacobs’ cheeks.

“We were with him three years ago when he could barely walk,” Jacobs said. “And now for him to be able to come back and win the most important tournament in the world for him, it’s amazing.”

As Woods hopped in a cart and headed for the interview room, one by one the crowd began to thin. But before they could meander across the first fairway toward one exit or down the hill toward the other, they all passed the imposing scoreboard in front of the 18th green.

It’s the same unbiased edifice that has stood witness to so many green jackets previously, a timeless mural of greens and reds that has room only for results, not intent. And plastered in the middle was a red 13 next to Woods’ name, a singular declaration for all to see that history had indeed been made.

“This beats last year,” one patron said to another. “Nah,” the other quickly responded. “This beats every year.”