Els loses to Woods one more time, and it hurts as much as it ever did 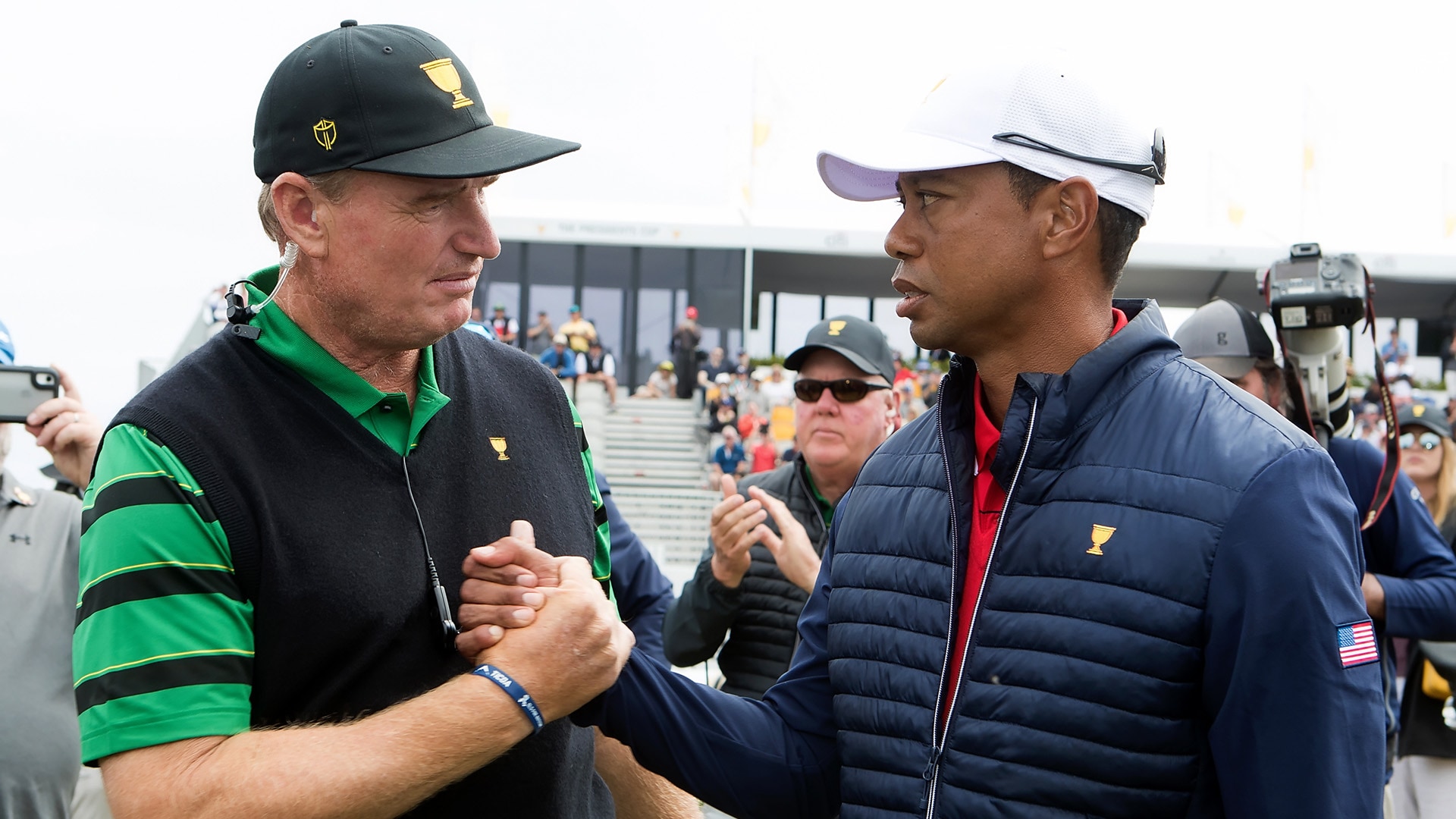 MELBOURNE, Australia – When Tiger Woods famously won the 2000 U.S. Open, it was Ernie Els who became the face of a hapless generation.

In the heat of the moment, the runner-up was asked his thoughts on Woods’ 15-stroke victory, which shattered the previous record held by Tom Morris for margin of victory in a major.

An incredulous Els seethed: “If you put Old Tom Morris with Tiger Woods, he'd probably beat him by 80 shots right now. Hey, the guy is unbelievable, man. I'm running out of words. Give me a break.”

For Els, there have been precious few, if any, breaks when it comes to Woods.

History and hindsight will prove that Els was exactly what the International team needed, a natural leader with an easily digestible vision that his players embraced.

Els pointed out earlier this week that even though the U.S. team was favored on paper, the matches are played on grass, and for three days that notion held. The International captain called all the right plays during the team sessions, and the home team rode a two-point advantage into Sunday. With two of his most accomplished veterans, Louis Oosthuizen and Marc Leishman, anchoring the Sunday action, this was all Els could have wanted.

Both players tied their matches, but the Americans won the cup for the eighth consecutive time, 16-14. Just two of Els’ players won full points Sunday: Sungjae Im and Cameron Smith.

It was an all-too-familiar scene for Els, as he slumped into a golf cart with longtime caddie Ricci Roberts perched by his side, mulling what could have been as he watched Matt Kuchar finish the International team off with a cup-clinching birdie at No. 17.

Maybe it was too soon for Els. Maybe given enough time to unpack his turn as captain, he will come to the realization that this was a step in the right direction. Maybe this defeat won’t leave as much scar tissue as all those other times he’s lost to Tiger.

But that time isn’t now. Asked to assess Woods’ performance as both captain and player at Royal Melbourne, Els groused: “You can ask him that. I'm not going to answer that.”

Even in defeat, however crushing it may be, captains find a way to cling to perspective. But after a lifetime of trial and mostly error against Woods, this captain had no interest niceties. The Big Easy was anything but. Once again, like in so many prior contests with Woods, the deck was stacked against him.

“If you compare our team on paper with other teams in other sports, you would have laughed us out of the building. But we gave it a hell of a go, and we came mightily close to winning and upsetting one of the greatest golf teams of all time,” Els said.

This was always going to be a different matchup between Woods and Els. All captains are competitive, but this was personal. For Els, it was one final chance to change a longstanding narrative. For Woods, it was another opportunity to expand his legacy.

Woods might have been playing the role of captain between matches, but it was still the determined competitor playing and calling the shots. Just as he did in 2000 at Pebble Beach, Els had no interest in dwelling on Woods’ performance, and Tiger had no interest in diplomacy.

“Abe wanted it; he got it,” Woods smiled, when asked about Abraham Ancer’s comments last month that he wanted to play Tiger at the Presidents Cup. Woods beat Ancer, 3 and 2, in the morning’s first match to send the U.S. on its victorious way.

Woods was what we thought he would be: intense, detail oriented and unforgiving, just as he is as a player. For the better part of two years, Els tirelessly worked to find an answer for Tiger, the captain, and Tiger, the player. But Sunday's result was one final haymaker in a rivalry filled with body blows.

“It's been a real privilege to have played in his era. Where the game of golf has gone in the last 25 years is just remarkable, and it could not be where it is today if it wasn't for Tiger Woods,” Els admitted earlier this week, before adding, “With all that being said and done, we'd like to kick their asses this week here at home.”

Els’ goal this week was to win, but he also set out to build a culture within the International team that’s been missing. He wanted to instill in the next generation that losing isn’t a foregone conclusion and to prove that his side is closer to ending its title drought than many people think.

Whether he succeeded remains to be seen, but there was one familiar truth that’s now followed him from his competitive prime into his captaincy. Tiger Woods spent a career beating Els with his golf clubs, and now he’s bested him with an earpiece.